“Smokey Joe’s Cafe” at the Ordway Illuminates an Era 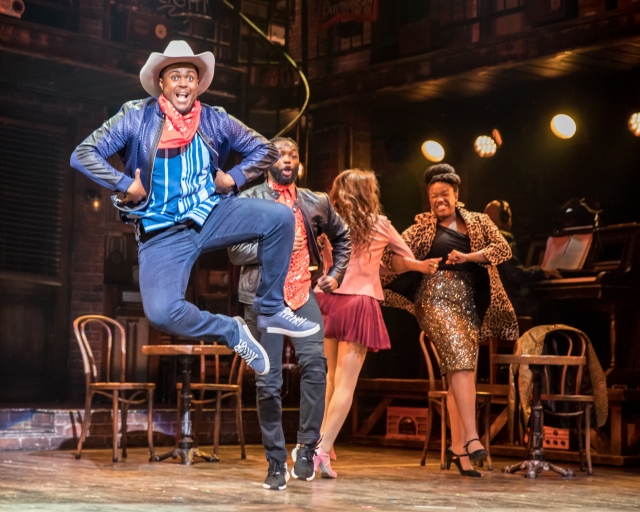 From the early 1950s to the mid-1960s, no songwriting duo stands out like lyricist Jerry Leiber and composer Mike Stoller. Their smash-hit tunes were sung by African-American singers like Ben E. King and “Big Mama” Thornton and vocal ensembles such as The Coasters and The Drifters. The Elvis Presley cult also owes much to indelible songs of Leiber & Stoller. You’ll see and hear the best of their body of work in a luminous original production of Smokey Joe’s Cafe: The Songs of Leiber & Stoller, with its impeccable band conducted by Sanford Moore at the Ordway Center for the Performing Arts.

Off-Broadway powerhouse Shavey Brown brings charm and to-the-rescue strength as the heroic cowboy in the parody tune classic, “Along Came Jones”, in which the hilarious Rendell Debose, in a crossgender turn, plays the damsel in distress on the railroad tracks. Throughout the revue, Debose reveals himself to be a truly inspired comic performer.
Brown and Debose, along with Kevin Brown, Jr. and Dwight Leslie, go on to offer up hip sophistication at its best in their On Broadway quartet. It presents one of the revue’s only real problems, though a nice one: you may well feel the urge to get up and move to the music with them.
Rajane Katurah goes a different path with one of L & S’s biggest hits, “Hound Dog”, in a beguiling interpretation that has us un-do the patterns we’ve become accustomed to hearing the tune via Elvis Presley. She makes the song her own both stylistically and in emphasis. Hearing a woman sing the tune gives it a very different feel, and that’s a good thing!
Charismatic Jorie Ann Kosel evokes the forlorn in textures quite different from the rest of the show in her powerful delivery of the country styled ballad, “Pearl’s a Singer”. China Brickey allures like a vision from the heavens as she descends a spiral staircase to an enchanted Leslie’s achingly lovely take on “Spanish Harlem”. Brickey also ignites a humorous sense of gender competitiveness in her delightful duet with Shavey Brown – “You’re the Boss”.
Kevin Brown, Jr. is simply wrenching in the dramatic “I Who Have Nothing”—a point of high drama in song that deepens the revue’s effect beautifully. By contrast, Emily Scinto is a vision of the sexy swingin’ ’60s as she shimmies in defiance of all things puritanical. An adoring Ben Bakken sings in celebration of that. One may think of Nancy Sinatra and the power of female sexuality—not to mention, it’s one of costume designer Jeni O’Malley’s best moments among an overall wonderful wardrobe line-up that truly transports us back to the time. Scinto also captures the era vividly in her dreamy take on Falling.
As for Bakken, he’s always such fun to watch. That great voice with its nasty bad-boy edge and wonderful kinetic energy add their sweet mischief throughout Smokey Joe’s Cafe. He’s a Twin Cities musical theater treasure.
All four resplendent women get a chance to shine as a dynamic unit is “I’m a Woman”. For you old enough to remember, it’s that sultry song where the singer spells out “W-O-M-A-N, I’ll say it again, hey!” How cool is that that two men crafted this tune and the Ordway women who sing it are out of sight! Oh the memories Smokey Joe’s Cafe does bring back…
Johsua Bergasse’s direction and choreography evoke the zeitgeist of the time and he has moved the tunes and their transitions with fluidity and visual beauty. Speaking of beauty, Jeff Croiter’s rich colored lighting blended onto Beowulf Boritt’s set design both capture the look and atmosphere of a night club in a lovely old classic building. You may just want to walk right up onto the stage. But please don’t!
Smokey Joe’s Cafe
Through Sept. 22
Ordway Center, 345 Washington St., St. Paul
(651) 224-4222
www.ordway.org