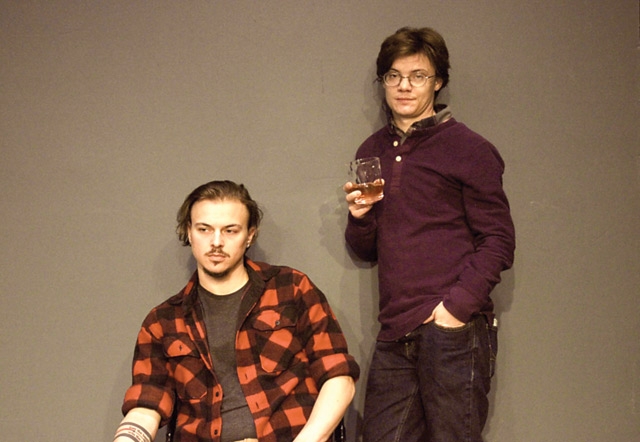 As America’s political landscape seemingly grows more hostile and divided by the day, the ideological divide between small-town tradition and big city progressivism has been a major point of contention in the culture wars splitting our society apart. Political rancor has proven to be a major detriment in being able to converse with one another in a healthy, respectful fashion, especially when headstrong and extremely vocal individuals on both side of the aisle let their volume drown out any possibility of common ground.

In Uprising Theatre Company’s powerful production of playwright Shannon TL Kearns’ In A Stand Of Dying Trees at the Off Leash Art Box, these very topical themes are explored at length, along with observations on the existence of transgender people living in rural areas, the realities of the negative impact of capitalism on small towns, and the complexities of self-defense and gun violence.

Jeff Miller plays Ben, a Minneapolis native who has been living in a small Minnesota town for several years with his partner Amanda, portrayed by Maretta Zilic. Ben, a factory worker and avid hunter, has lived in relative peace and comfort in this little town, where everybody knows and looks out for each other. Amanda, a nurse who works at a hospital 45 minutes away, agreed to move to their new home largely to accommodate Ben, all while enduring numerous crushing shifts at the hospital where the nurses do not benefit from a union.

There’s one wrinkle in Ben and Amanda’s idyllic rural life: Ben is a transgender man, having transitioned back in Minneapolis before moving away. Aside from Amanda, nobody else is aware of Ben’s status as a transgender person, which he holds close to the vest out of fear that the rest of the townsfolk will turn on him, including his older co-worker and friend Joe, played by Mike Novak.

However, Ben’s status quo is shaken by the arrival of his old college friend Liam, played by Carey Morton. A fellow trans man, the very progressive and politically active Liam is in town to canvass for the upcoming election, hoping to convince the rural townspeople to vote blue. Unfortunately, Liam’s outspokenness is not only rubbing many locals the wrong way, but Ben is afraid that Liam’s presence could threaten to upend Ben’s efforts to keep his gender identity secret.

Although the Off Leash Art Box is a small and intimate venue, it’s outsized by the palpable emotion and astonishing character work as directed by Emily England. Kearns, the founder and artistic director of Uprising Theatre Company, is a transgender man who similarly grew up in a small town where hunting was the norm, and mentions in the program notes the tension he felt returning to his hometown post-transition. While many queer and trans folk find it easier to live openly in a big city environment, the reality is that for many GLBT folk who live in small or rural towns, it’s not as easy to live their truth.

In the play, Ben does all he can to quell suspicion, especially when he’s out drinking with the ornery and very conservative Joe, placing a moratorium on political talk when they’re downing beers at the local bar. Joe rails against the way blue-collar workers are treated, fearing layoffs at the factory. Meanwhile, Ben worries about Amanda, who takes on shift after shift at the hospital despite it costing her sleep and time at home together. It’s made clear from the start that Amanda agreed to move with Ben from Minneapolis because he needed a new normal out in the sticks, and she’s had to deal with her exhausting career woes in making that new normal a reality.

However, the old normal suddenly pops back into Ben’s life in the form of Liam, who belonged to the same college support group for trans people that Ben was a part of. Liam, a textbook outspoken liberal who stands in direct contrast with the largely apolitical Ben’s wishy-washiness, is mystified with the community that Ben’s become ensconced in. Liam automatically assumes that this small town is nothing but trigger-happy Fox News adherents, and is disgusted with the fact that Ben owns a shotgun due to the growing epidemic of gun violence in America. Liam chides Ben for keeping his gender identity a secret and not being vocal in his activism, to which Ben responds that he’s worked hard to gain his neighbors’ trust to remain safe.

Liam retorts, “We shouldn’t have to earn trust to be safe.”

Liam’s activist nature starts to impact the town in numerous ways: Liam persuades Amanda to start a nurses’ union at the hospital to fight for better pay and reasonable schedules, even though a potential strike could cause a lot of unrest for the community. Liam also crosses paths with Joe, who, while diametrically opposite politically, is similar to Liam in that he bears preconceived notions towards certain people, in this case with big city liberals and millennials, branding them as P.C. “snowflakes” who are easily offended.

The tension of these four characters intersecting and attempting to find common ground while clashing over matters regarding tradition, loyalty, and social justice simmers brilliantly thanks to the production’s excellent quartet of actors. Miller does fantastic work as Ben, expertly capturing his conflict over whether it’s better to stay in the closet (or “stealthy”, as he tells Liam) to remain in the town’s good graces, or to defy the strictures of small town values and be out and proud as a trans person. Zilic likewise carries her character with aplomb, giving Amanda a loving, supportive presence, while carrying a growing frustration with not only her demanding career, but also with Ben’s reluctance to stand on the front lines of her union strike, best personified by a powerful scene featuring an intense argument between Miller and Zilic.

Meanwhile, Morton does a stellar job as the hyper-liberal activist and fish out of water who attempts to lecture the small town residents into voting blue, with Liam’s passionate, albeit pushy, nature giving the character some of the funniest lines in the show, especially when Liam engages in political tête-à-têtes with Joe at the local bar. Novak’s performance as the aggressive, bellicose Joe is simply outstanding, offering the obstinate and bigoted baby boomer shades of depth that suggest glimmers of decency that are still overshadowed by his blatant homophobia and fear of change.

These differences ultimately light a slow-burning fuse that threatens the very social fabric of the town, not to mention Ben’s attempts to hide his trans status in order to maintain a semblance of normalcy at any cost, coming to a head in a shocking act of violence that is alluded to several times in a special framing device throughout the two-act show.

According to Kearns, In A Stand Of Dying Trees is a play about community: “What it means to have it, what it means to want it, what it means to lose it.” It illustrates that in regards to political division and how to solve partisan conflict, there certainly are no easy answers, but that there is also hope that engaging in civil conversation, breaking down deep-seated biases, and a sense of mutual understanding can lead to said answers. In A Stand Of Dying Trees does an exemplary job at keeping that conversation alive.