Slice: Where To Drink Right Now

Ignore those over-achiever leaves, the ones that insist on being the first to turn color. Pay no mind to that crisp scent of fall flitting on the edge of that cool morning breeze. After being cheated out of spring, I refused to call this fall. I’ll dip into the autumnal wardrobe, perhaps, but that is it. I’m clutching the dragging coattails of this summer season and I’m not letting go until the first snow falls. My favorite way to toast any occasion, or season, is to pair it with the perfect cocktail. The Twin Cities have been experiencing a delicious boon of bar talent. Here’s where to drink right now. 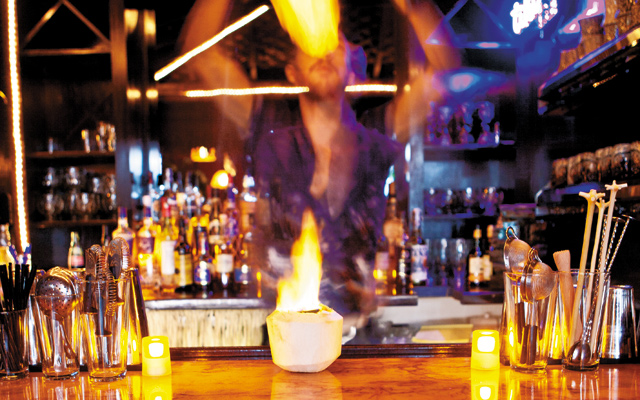 Flamethrower and barman Marco Zappia inside the Torpedo Room. Photo by Hubert Bonnet

Eat Street Social’s dining room was clearly designed with a bar in mind. The mixers here take center stage, flipping through their color wheel of citrus, bitters, herbs and booze to create drinkable art, but that’s not all. Nick Kosevich, president of the local North Star Bartender’s Guild, proprietor of Bittercube Bitters, highly sought-after drink menu consultant, and part-owner of ESS has created a booze paradise outside, also known as a tikki bar. They’re calling it the Torpedo Room.

Now forget what your brain conjures up when you’re thinking of tikki drinks – there will be no pina colada mix jugs behind this bar. Fresh ingredients will be combined with all matter of rums; a sorely under-appreciated spirit. (Think outside the Bacardi). All of the ingredients are crafted from scratch, like their artisan bitters, shrubs, and tinctures used at the inside bar. It’s likely you’ve never had a Mai Thai anything like what these people are making. The cocktails served here are crisp refreshers that transport any city dwelling drinker to a tropical paradise. 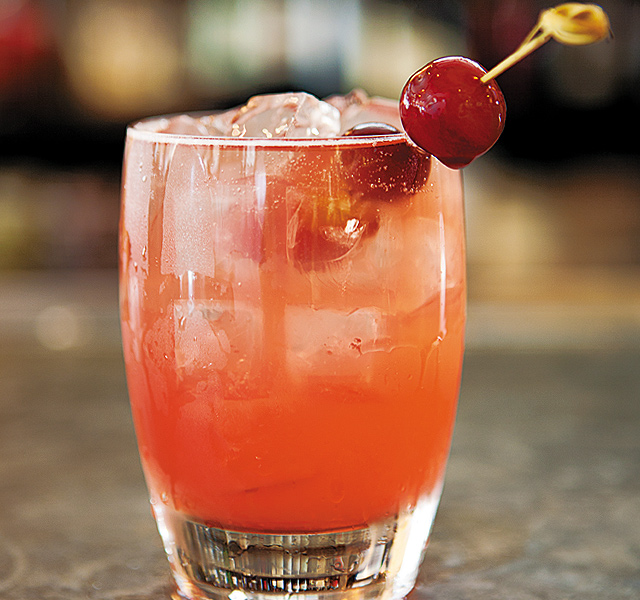 The only sangria you’ll ever need to know from Borough. Photos by Hubert Bonnet

Another outdoor bar that must be experienced before the snow flies is the patio of Borough. Bar leader Jesse Held has amassed an impressive stable of talent at Borough, their downstairs bar Parlour, and this sweet little side bar. They offer a selection of Sangrias that are packed with citrus and herb flavors; no higher compliment could be paid to a pink wine than to be transformed into their green cardamom infused, honey-kissed rosé sangria. However, that is just the tip of the drink menu ice cube.

Settle into one of their high and comfortable seats and peruse the menu. There are familiar drinks, like their Old Fashioned, Old Grand Dad 114 and Jim Beam Rye is mixed with just a little Piloncillo (an unrefined sugar) for a husky sweetness that is balanced by splash of bitters.

Or, if they are experiencing a rare slow day, ask the bartender what they feel like whipping up for you. The cavalcade of talent at this spot is sure to be a little heavy as they start hiring for the next phase in the Borough world. This same team will soon be heading to Uptown to open the still-under-construction Coup d’état, their second restaurant.

While sipping at the bar you might notice plate after plate being delivered to all the other diners filled with a massive cheeseburger. You’re going to want to order one of those as well. The thin patties and lush, gooey, ivory colored cheese, stacks up to be the best stomach base for cocktails your taste buds could ever request. 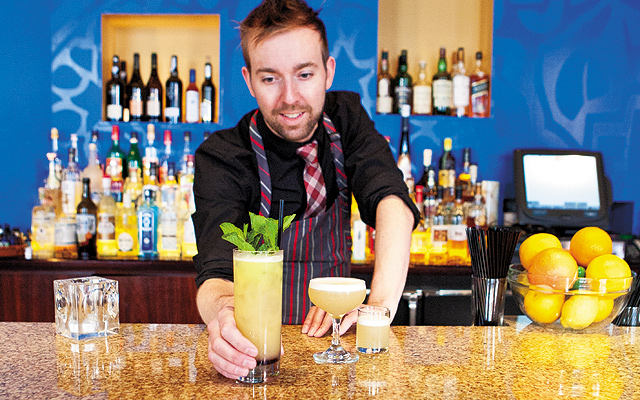 A tiki takedown called 1999 and The Bird Has Flown with aquavit, honey, tonic and more; Master bartender Robert Jones. Photo by Hubert Bonnet

On the off-chance that perhaps there is a day that isn’t ideal for sitting outside, there is one other spot so hot you’ll stay toasty all year long. Just say the name with me…Saffron. Ah, doesn’t that just feel like warmth and refinement? The man behind the bar is Rob Jones, the sort of drink shaker that has developed a beloved following. The liquoratti would follow this fellow anywhere, but that he’s residing at the Wadi brother’s delicious downtown spot makes the commute all the easier for any day of the week.

Jones has been recognized as the Best Bartender and recently won the Most Imaginative Bartender competition sponsored by Bombay Sapphire Gin and GQ magazine. (His winning cocktail was comprised of gin, watermelon that he cryovac-ed with fresh dill, and an anise scented liqueur.)  It’s a global competition and he was flown out to Las Vegas to represent Minnesota. Even if he doesn’t win the world with gin, he’s won my admiration with his balanced and innovative cocktails like The Cornballer. Old Weller 107 bourbon is mixed with “roasted corn essence” and sea salt.

Or go for something summery with The Patio at Saffron 2.0, white sangria made with peaches, subtly sweet rum, and a handful of fresh fruit. Paired with a couple of their heavenly small plates (even as simple as their freshly made potato chips with a yogurt and sumac-scented za’tar seasoning) you’ll forget you’re indoors.

No matter where you choose to cocktail, there are plenty of ways to savor all three of the seasons we’ve had this year.

Did you catch that coup d’état? The new restaurant from the Borough/Parlour team will again have a kitchen run by Tyler Shipton and Nick O’Leary. They’re moving into the base of a luxury apartment building that is taking shape on the ground where Campiello once stood. (Lagoon and Girard.)

Remember what I told you about The Triton coming to the former Joe’s Garage? Well, scratch that. It looks like the name and concept are under revision.

In Season is no more. After closing the restaurant for an expected remodel, owner and chef Don Saunders made the tough decision to shutter it completely. You can still sample his elegant food at The Kenwood.

The Twin Cities finally has a real pop-up restaurant! Get a taste of what the Travail guys have been working on at the old Louisiana Fried Chicken space on West Broadway. They’re calling it Umami, serving Asian-inspired dishes given a dose of their culinary wizardry. Check the Travail Facebook page for details.)