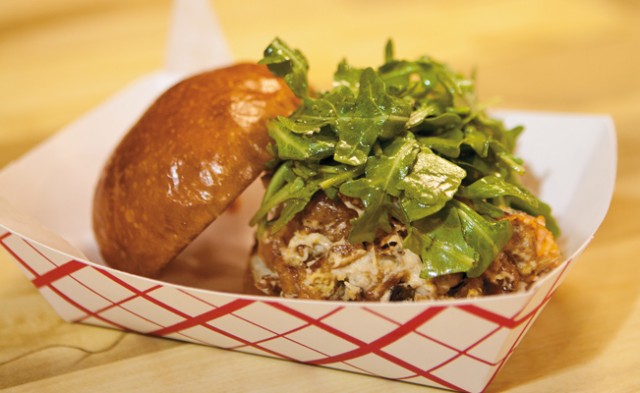 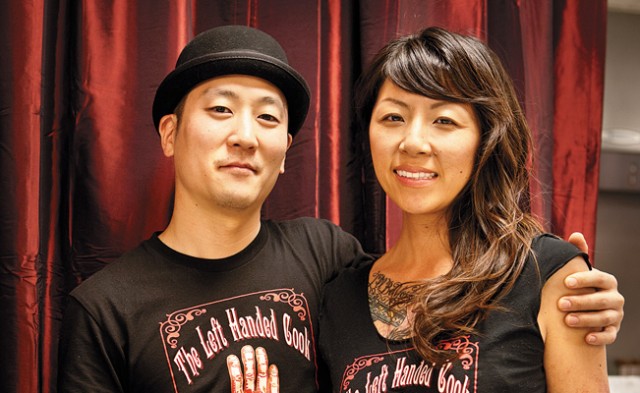 It takes a special kind of crazy to want to pick up from L.A., where you’ve established a career and life for yourself, plop down in the middle of a city that you’ve never lived in, and open up a business. Thankfully, Thomas Kim and Kat Melgaard are just the right kind of crazy. Tiring of the smog, the traffic, and the general high cost of living, they traded in the city of angels for the Minneapple.

Kim has extensive experience, having worked in the highly starred kitchens of Nobu and Roy Yamaguchi. Before his time in L.A., he was working in the food-snob paradise of San Francisco.  While his experience was mostly as a sushi chef, he had dreams of opening his own place.

Before Melgaard went westward, she was raised on a farm in North Dakota. Growing up a sneeze away from Canada, she is better prepared for the winters that are yet to come.  She spent some time in Minneapolis years ago when she attended the Aveda Institute. 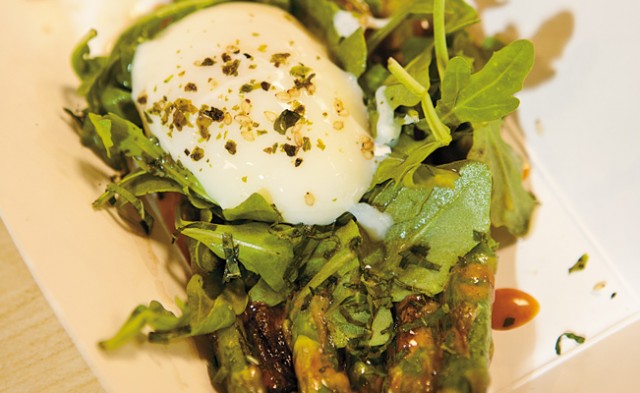 Asparagus with baby arugula salad and a poached egg.

When it came time for them to decide where to land, she remembered her time in the Cities fondly and knew she would at least be closer to her family (though they’ll likely miss the perks of visiting L.A. in the winter.)

They considered other locations, but they decided to open their new restaurant inside a stall at the Midtown Global market. They were able to transform what was once La Sirena Gorda into a hip space that will sell food to grab and go as well as have counter service.

The concept of The Left Handed Cook is revolutionary for the Midtown Global Market place. The menu sounds like a long list of the food that I know chefs love to eat in their off hours. It’s all at once gourmet, but full of comfort food. It’s full of Asian accents, but entirely at home in the Midwest.

The pulled pork sandwich is full of tender barbecued tendrils, mixed with bacon beneath a slaw spiked with a sweet Korean chili sauce and tucked inside a buttery domed Salty Tart bun.

The soft shell crab sandwich is full of generous hunks of crispy fried crab, a Korean aioli, and a generous splash of lemon juice. It’s hearty, bright, savory and luscious.

However, the one menu that simply cannot be missed is the fried chicken. Chicken breasts are breaded tempura-style using rice flour and potato starch and hit with 21 spices. I asked Kim, “Why 21? Is it even possible to taste so many different spices?”

“Well, there are like five chili powders in there – there’s no way to be able to taste them all.”  He went on to explain that, while he uses a very Japanese technique, the flavors are mainly American. He loves the aromatic quality of coriander, sage, rosemary, and thyme. The result is a flavor riot inside your mouth. Kapow! The crunchy crust gives way to ultra juicy chicken on the inside. Sometimes, life lets us be present in those special moments, when we find a new and last love. I know that from here on out, this is the chicken that I will crave.

The most unique feature at the Left Handed Cook will be their chef’s table. Beginning at 4:30, the counter space they have will be transformed (well, they’ll pull back a curtain, but I’m sure it will be dramatic). A prix fixe menu will be revealed, and for a nominal amount of money (in the $35 range), guests will be able to watch this chef really flex his muscles. To say nothing of his L.A. expertise, he’s been warming up inside Piccolo’s kitchen since he moved here, doing a couple of stages. His creative juices are piqued, and he’s ready to show them off. I predict this will be one of the most unique cheap date night experiences the city has to offer. 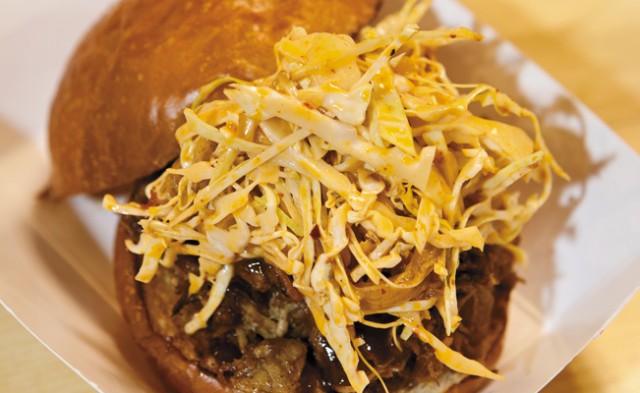 While he mans the food, Melgaard manages the service aspect. Her creative eye and punk-DIY aesthetic brings a unique look to The Left Handed Cook. She adds genius little touches like Mason jars filled with vegetable oil and pictures placed inside. They made for great centerpieces at their opening party. Plastic cups were adorned with beads that spelled out helpful suggestions like, “Eat more.” She’s a party-throwing genius.

They also hope to soon be able to offer beer and wine. Once El Burrito Mercado opens nearby, the hope is that they, alongside Sonora Grill, will be able to band together and open a little beer garden.

Midtown Global Market continues to be a terrific place for hugely talented food makers to get their foot in the door. Or in this case, one talented left hand.

Icehouse finally has an opening date. Described as a restaurant with a stage, the food will be done by the same guys who run Be’Wiched, and the stage will feature some major local music players. Open June 7th.

The Butcher & the Boar beer garden is open, and I was right: it’s the new best patio in downtown Minneapolis. Unfortunately, the menu is quite limited. The beer and bourbon is a’plentiful, though. 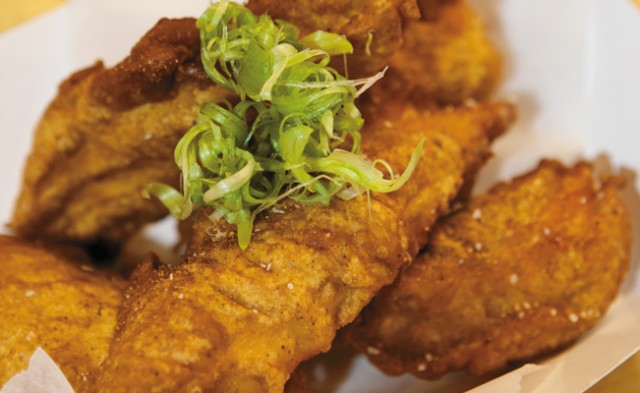 It’s good to be Tim McKee. This week Masu Sushi & Robata was featured in both Food & Wine and Bon Appetit. Then Men’s Fitness crowned his original restaurant, La Belle Vie one of the Top 25 Bars in America. Johnny Michaels wrote the bar menus at both spots.

Sad news for breakfast al fresco diners: Mill City Café is closing. Their final service will be a party May 30th from 5 to 10pm. Owner Mandy Zechmeister assured me that they will soon relocate and that she’ll keep us posted on the new locale.