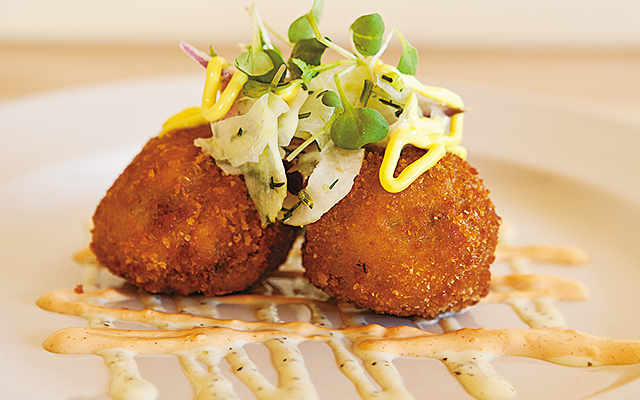 Chef Hector Ruíz has a lot on his plate. The busy chef and owner of Café Ena and the newly opened Rincón 38 is filling me in on a frustrating phone call he had just wrapped up with his insurance man. He had just finished the conversation, which is why it was so fresh on his mind and he was late for our meeting. He’s a hands-on businessman, pouring himself into his restaurants.  He hasn’t just opened a new restaurant. He just built his new restaurant from the sheetrock out.

Ruíz is an established Minneapolis restaurateur. Up until this past October, he also owned and operated El Meson on Lyndale Avenue. Known for their small plates and sangria, El Meson was also an older building. It had been a restaurant for 33 years and functioned for 10 of those years as El Meson.  When there was rain, they would have to put out buckets. The patio was a nice spot in the summer, but in the winter the dining room could get quite chilly. Ruíz was tired of having to make repairs and calling the the landlord for various issues. He decided it was time to make a change and he closed the doors.

At Rincón 38, fans of the El Meson tapas will be happy to find a few flavors that bring back memories of sunny days on that patio. I asked Ruíz why he wanted to focus on small plates, “Because foodie folks, like yourself, know tapas. You say that word and you know what to expect, but it’s not just small plates from Spain. I also have dishes from Italy and France.” 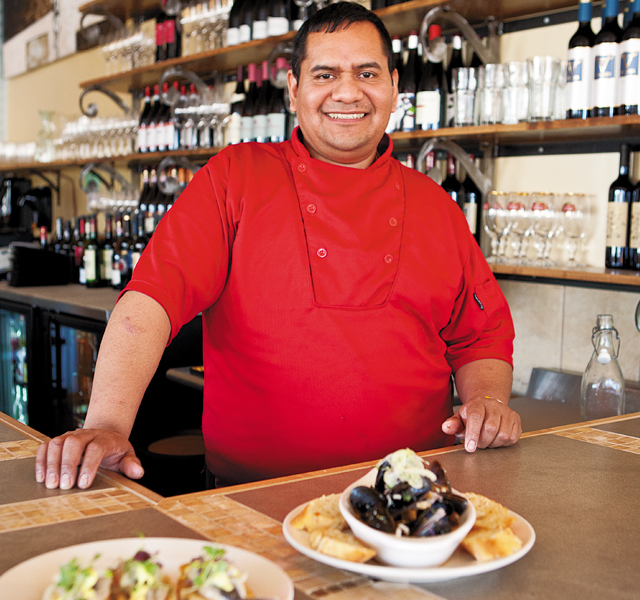 Ruíz grew up in Morelos, Mexico. He moved from there to Venice, California, where he worked at a Jamaican restaurant. From there, he traveled and worked in kitchens from Arizona to Chicago to New York and a stint studying with a master chef in France. Eventually, he fell in love with Minneapolis and the appeal of a big city that feels like a small town.

Rincón 38 is meant to have worldly appeal with a neighborhood feel. The menu features dishes like bacalao, fried salt cod fritters, a popular Spanish snack and a great dish for pairing with beer (or sangria – the El Meson recipe is in full effect here) as well are queso frito – fried cheese and patas bravas, fried potatoes.

There are quite a few local brews on tap and a well-selected wine list. There are a number of very affordable glasses and bottles on display.

The room is modest in size, warmly lit and cozy. It’s fast becoming a spot to catch other area chefs after hours. Unique to the neighborhood, they stay open until midnight most nights. There aren’t many spots in this part of town where you can dine later into the evening.

When asked what surprises Chef Ruíz most about his new restaurant, he replied, “Minnesotans love octopus.” We’re going through ten to twenty pounds a week. He serves his octopus or pulpo braised with potatoes, citrus aioli, pimenton aioli, and Spanish chorizo drizzled with sherry.

Like his other restaurant, Café Ena, he utilizes a lot of seafood. The mussels are served in a simple, buttery white wine sauce with hunks of bread for dunking. 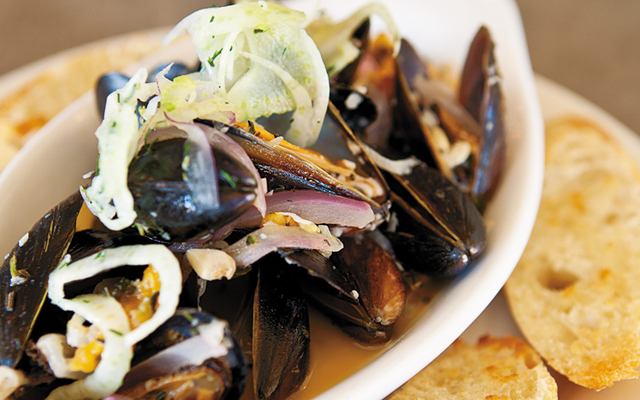 The menu is filled with meats, veggies and more for munching. It’s the type of restaurant built for casual grazing. But, while it’s casual for guests, it’s the result of long hours and hard work for Chef Hector Ruíz and his crew, which is why he’s got to man the phones, sign for deliveries, prep the food, prepare dishes for his guests, and deal with the insurance man while fielding questions for a pesky food writer.

The former Burch Pharmacy has been reborn as Burch Steak and Pizza Bar. Initial tastes are promising. They’re cooking all kinds of cuts of beef along with imaginative dumplings and sides. Downstairs pizzas are charred in a wood-burning oven. Beautiful, open room with great views of the bustling street.

Maybe they should have called it mediocre? Primebar has suddenly vacated Calhoun Square. It’s prime real estate and likely won’t be vacant for long. Dear Kaskaid Hospitality: Figlio 2.0 x 2 might not be such a bad idea.

Sunnyside Road says Howdy to Hello Pizza. Ann Kim of Pizzeria Lola has opened her second pie shop. Different than the first, this serves New York-style pizzas by either the whole pie or the slice. They’ve also got salads and a Korean Cowboy sub that are worth checking out.

Big changes are happening out in Robbinsdale. Travail has closed to make some big changes. In the original space, they’ll be installing a pizza oven and re-opening the place as Pig Ate My Pizza, a charcuterie and pizza spot. Later, in likely September, Travail will be reborn in a new location, just a few doors down as two new spots. One, also called Travail, is a small no-reservations spot (unless you’d like to do the big ticket tasting menu for 10 people or more). They will also be opening The Rookery, a sandwich and cocktail spot. No one enjoys turning convention on its ear like these guys. Robbinsdale is looking like it will soon be the new dining destination neighborhood. Who knew?

Another bold name chef making moves is Chef Jack Riebel. The top toque at Butcher and the Boar is heading over to Joe’s Garage to consult on a revamp of the restaurant. They’re gutting the building and the space will be reborn.

FireLake has opened their second restaurant in the new Radisson at the Mall of America.