Slice: Landing at The Lynn on Bryant, a comfortable place to be 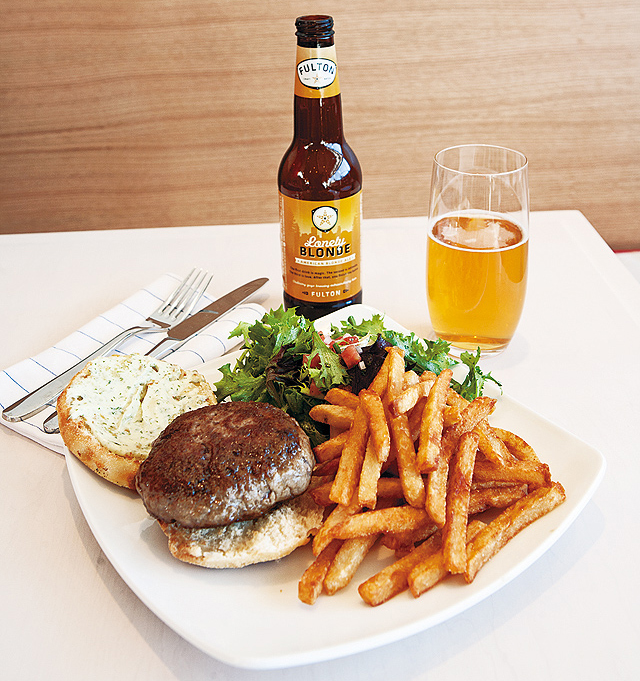 Burger and fries with a tall Blonde. Photos by Hubert Bonnet

There’s a new meeting place for the Lynnhurst neighborhood. The block of businesses that were once devastated by fire now shows no sign of the destruction that was once here. It’s been reborn as a thriving hub of restaurants and shops. The completion of the rebirth was the opening of The Lynn on Bryant.

The men behind this new spot are Jay Peterson and Peter Ireland. Jay was a long-time manager of the independent book store, Magers & Quinn. Peter is a chef from Vermont who has cooked all over the world, from Beijing to France as well as a restaurant-style soup kitchen in Vermont.

Both had hopes and plans for a restaurant that would be a part of the community. The food would be sourced directly from farms, fresh and sustainable.  The space would be somewhere for families and friends to gather. The two also have a shared passion for farm fresh food that comes directly from the source.  They believe in supporting those who work the land in a sustainable fashion.  They took their idea to Kickstarter and began a fundraising campaign.  Incentives included a family-style dinner at their communal table, names etched into custom made branch coat hooks, handmade baskets filled with preserved goodies; each incentive reflective of the communal feeling they hoped to foster.  The fundraiser was successful, with them exceeding their goal and soon, The Lynn on Bryant opened their doors.

On my first visit, my companion remarked, “It looks like Ikea, but… classy.”

“And you don’t have to put anything together!” enthused another. 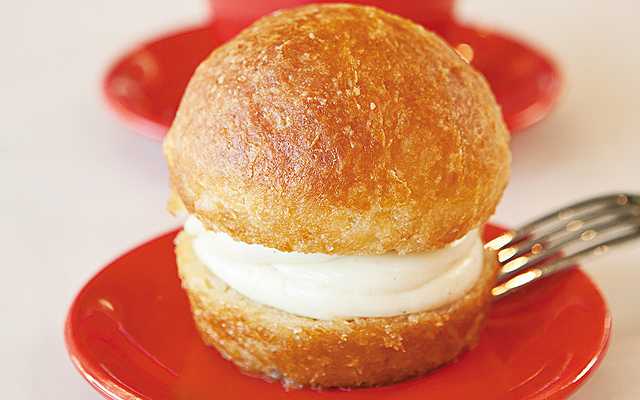 The long, white communal table dominates the front room, where the décor is clean and bright with rustic touches, like a focal wall decorated with reclaimed wood, with just a sliver of red accent paint visible between the slats.  It’s sunny, bright and welcoming.

Past the open kitchen, the back room is cozier with soft lighting, no windows and soft acoustics.

They serve breakfast, lunch and dinner.  They also have a slew of house made pastries (with just a few items such as chocolate croissant brought in from nearby Patisserie 46).  Anyone lucky enough to have this spot in the path of their morning commute can duck in for a cup of ultra rich, perfectly roasted coffee and a scone or gluten-free muffin to jump start the work day.  The coffee was consulted upon by Andrew Kopplin – local brew guru and owner of St. Paul’s Kopplin’s Coffee and it tastes like it. This is beyond your average cup.  The scones include some flavors like a candied ginger studded number packed with fresh, local apples, fluffy and perfectly crumbly.

Breakfast items include a few variations on fresh, local eggs like steamed Florentine: sautéed spinach topped with an egg, gently cooked in a hinge-topped jar, or their soft boiled eggs, served in pristine little cups alongside crispy little toast fingers.

The French toast is actually a fat slice of egg and butter redolent brioche served with a side of amber hued, real maple syrup.  They know their way around a sweet tooth.  Try the Baba Rhum, brioche buns sandwiching a generous amount of vanilla whipped cream spiked with just a bit of orange and then soaked in a generous amount of rum.

Sides include unsmoked bacon, which is fantastic, thick sliced bacon; house made sausage, with just a bit of sage sweetness and bacon steak, which is a huge hunk of sweet glazed pork belly.

Lunch is just as decadent or light as a diner would like to make it.  The house made pate is wondrously fatty and served with bread, which is – of course – made in house, from scratch.  Their Lynn burger is perfectly cooked ground beef atop one of their house made English muffins, served alongside their killer fries (made all the more awesome because they’re fried in lard.)  The Bryant is a veggie burger served with their chickpea fries (also vegetarian.)  The chickpea fries are fat wedges, crispy on the outside and creamy, soft on the inside, they’re big and fat and quite tasty.

Kids meals are fun for little ones- to each, a selection of treats served in a muffin tin. They even have ants on a log – do kids these days know about those? 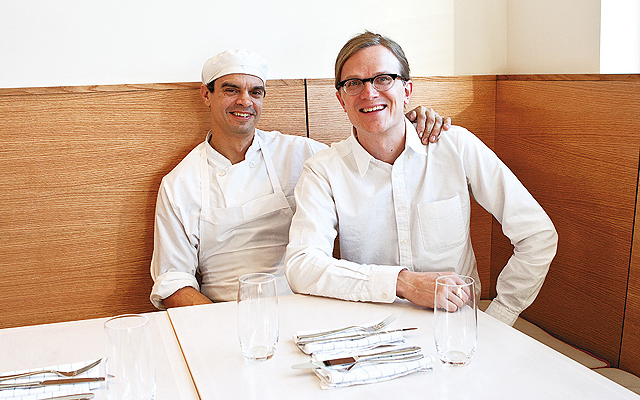 Dinner features some of the same lunch items, like the burgers and croque madame/monsieur, but there are also more elegant options like the pork two ways, roasted shoulder with sautéed loin. Or the chicken grande-mere with bacon lardons, a comforting, French-elegant twist on a Sunday supper favorite.

The Lynn on Bryant also serves beer, featuring many local brews and a well-selected wine list.  For something a little different, try an utterly refreshing tincho, Argentinean white wine over ice with a little lime juice.

Desserts are cakes, cookies or sorbets, all made in house, on site with a perfect amount of sweetness – their pastry chef is clearly mindful of the amount of sugar in their sweets.  A nipple-y-shaped almond crumbly cookie was just a bit sweet, nicely balanced between chewy and crispy crunchy.

Prices are anywhere from a few dollars to $28 for the dinner sea bass, which is to say, all dishes are entirely affordable. 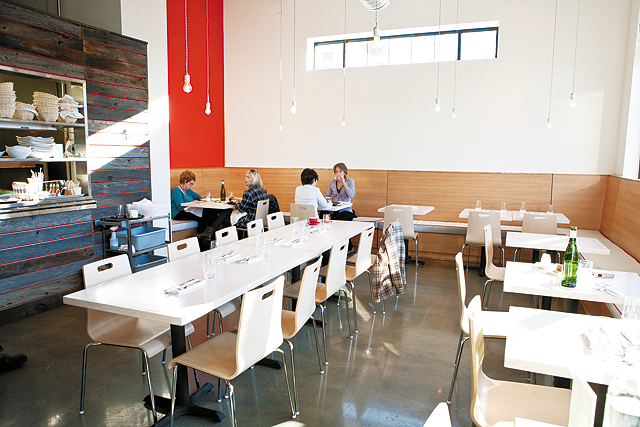 It’s not every ambitious idea that opens right out of the gate, nailing their intention, but so far The Lynn seems to do just that. At every visit, the room has been a gathering of neighbors, couples, families, friends, people meeting for business purposes or just passing through.  There’s a new place near the heart of this Minneapolis community and they have gently placed their fingers right on the pulse.