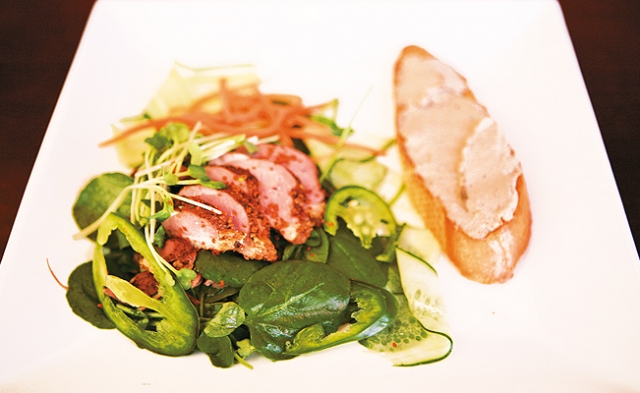 I confess that when I enter the café, I do at least wish there was a Bea Arthur print somewhere. Instead of that proto-feminist icon, Café Maude celebrates another, in this case a real person. Maude Armatage helped create the Minneapolis parks system, making their new home on the edge of Loring Park a perfect fit.

Café Maude mixes the historically boho Loring Park vibe with their proven formula of killer cocktails, comfort food with a dash of live music, and lands softly in their new space with an ease that feels like they’ve been there for much longer than the last few weeks.

The tapestry fabric wrapping around the top of the bar and the gold velvet backs on some of the booths harkens back to the the Loring Bar.  There’s space for live music and plenty of comfortable seating.  It’s definitely got that same sophisticated, comfortable Maude vibe.

The cocktails and menu also have that same artisan flavor because they’re being overseen by the same talented folks who work at the original location. Chef Matthew Kempf has been splitting his time between the two locations, but here he was given free reign over the creation. 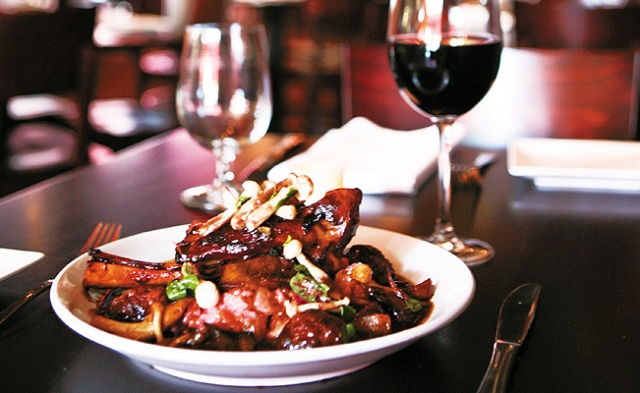 The menu is filled with new dishes;  just a few classics carried over. The entrees we sampled were sophisticated comfort food with a creative twist. Although the soaring temperatures continue to linger, a dish of lamb shanks and roasted beets was such a fall stunner that I can imagine wrapping myself in cashmere and digging in with bulky-clothed glee ($24).  A stunning shade of scarlet magenta mixed with glazed mahogany colors glisten on the plate. The meat is so wonderfully tender that it discards its own bone after just a little fork prodding. Beneath the leg is a creamy goat cheese risotto studded with earthy beets and little nubs of porky merguez sausage gilding the plated lily.

A plate of fish and chips sounds simple enough, but what arrives is a little bit of a creative wink; the black cod has a crunchy top crust, while the interior is beautifully moist, feathery, and tender ($24).  The chips in question are actually little puffs of fried potato.  They look like tater tots, but they’re filled with creamy, silky potatoes. Herby green dollops of sauce mix with another mustard-spiked creamy swipe of another.

For lighter fare, the duck “bahn mi” salad is topped with chilled, sliced, ultra-smoky breast  ($12). Fanned out on top of spinach, it’s a nice cool compliment to the current hot weather, served with toast smeared with a generous amount of pate. 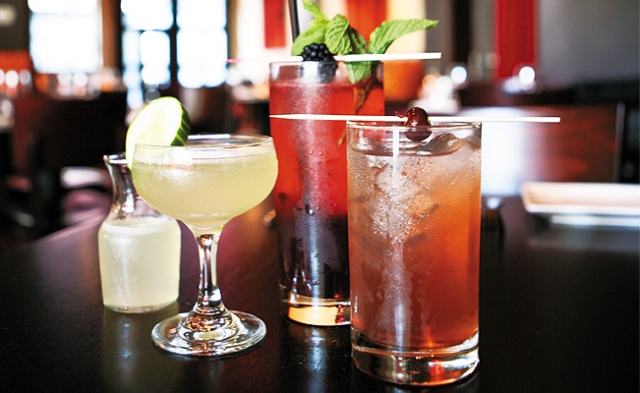 Even more refreshing are the cocktails. Café Maude has always paid careful attention to their cocktail program, one of the first restaurants in town to understand the importance of a cultivated, creative bar team. When the original Maude opened, owner Kevin Sheehy worked with his friend Johnny Michaels, the famed drink shaker from La Belle Vie.  The man literally wrote the book on craft cocktails. Now manning the bar is Adam Harness. If you haven’t had the pleasure of being served by this highly-skilled young man, might I suggest you scoot in sooner—not later.  He’s not alone behind that bar; joining him are Chad Larson and Shawn Jones, also members of the Northstar Bartenders Guild and incredibly talented. They bring their own verve to classic cocktails as well as creating entirely new flavors.  Take for instance the shrub. Ever heard of one? Me neither, but apparently it’s an old-fashioned way of preserving fruit in vinegar and sugar. Mixed into the Kentucky Pilgrim ($10), the cranberry shrub adds a welcome tart sweetness to the bourbon.

Even teetotalers can appreciate the bar menu—there are a whole slew of non-alcoholic drinks. It’s a refreshing and delicious trend.

The new Maude is open at 4pm to midnight every day and serves brunch on the weekends beginning at 9 am.