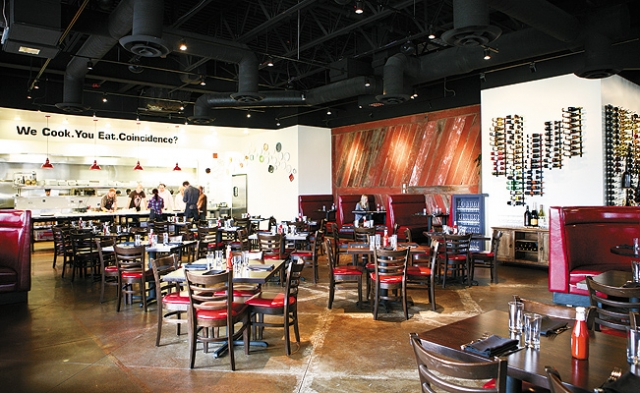 Standing at the edge of Uptown on a raucous night, with irresponsible kids expelling cheap beer onto curbs, you can hear the siren song of the suburbs if you tilt your head just so.  There is a land of wide streets and cul-de-sacs where the garage space is plentiful. “Kiss your coin-operated apartment existence goodbye, and become one of us,” this green space promises.

Then comes the downside, just don’t expect to have the kind of restaurants you’ve come to love to exist out there.  In the land of plenty, there are a lot of sports bars.  The strip malls are dominated by chains who consider frying and microwaving the best food delivery system.

From Plymouth emerges a new restaurant, Eat Shop.  They halved the size of the freezer and put in a cooktop. (When they arrived, the only way to cook the food was in the fry-o-lator.)  From inside this kitchen comes chef-driven, scratch cooking. Everything about their approach is straightforward. 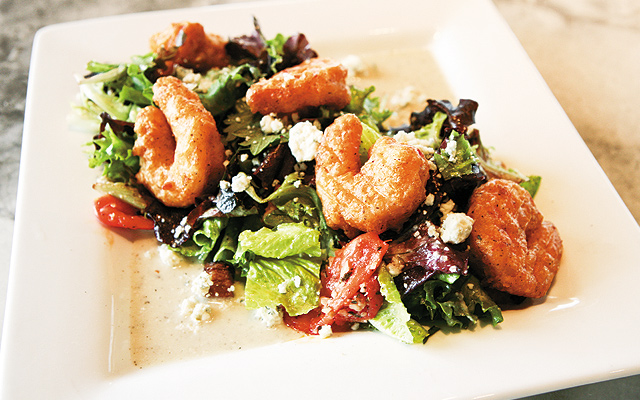 The space is large with little touches of whimsy. There’s a silhouette of a pig with a balloon tied around his middle (the name of the group running the restaurant is Flying Swine) above one large corner booth, stacks of wine bottles, and a trail of mismatched plates adorning the wall next to the kitchen.  There is also a screen stretched over part of the dining room playing a loop of food movies and classic Julia Child episodes.

The team behind this new venture has extensive experience in the restaurant business, balanced with the fresh enthusiasm of doing it all for themselves for the first time.

The team that put this place together includes the culinary forces of Chef Jeff Anderson as well as Michael Larson.  Larson began working with Parasole (the local company that owns Chino Latino, Manny’s, Muffaletta, Cafeteria, among others) when he was just nineteen.  He stayed with them for 25 years until he decided he was ready to go out on his own.

When asked how he got into the culinary business, he shared a story about working in Hugo at Paul’s Pizza.  When a tornado ripped through the area, he found himself working overtime, trying to keep up with the tide of orders as they roared in one after another.  He said it was just one of those moments when, while riding his bike home, he realized he was really good at this. Then he quipped, “Also, [on “Three’s Company”] Jack Tripper was a chef, and he was living with these two hot chicks.” 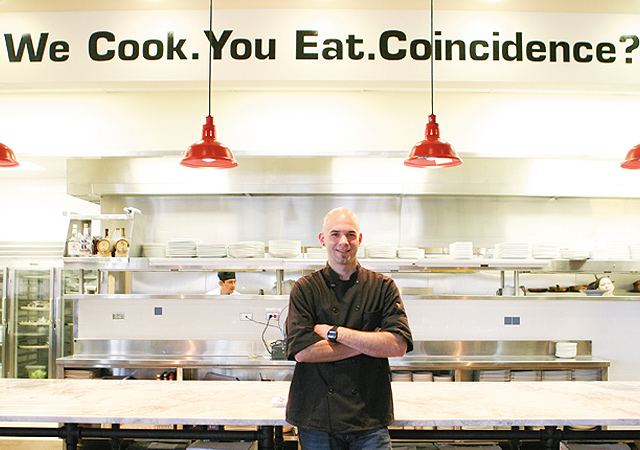 His path was not dissimilar to Jeff Anderson, whose first job was also at a pizza joint—the two even went to the same high school just a few years apart. Anderson went through culinary school in San Francisco.  When it was time to do his externship, he missed his family back in our region.  He landed at Chino Latino in 2004 where Larson was General Manager. The two clicked right away.

When Larson was ready to leave the Parasole fold, he went to Phil Roberts and received an enthusiastic blessing.  Both professed their profound respect for him and the Parasole company.

But enough about the history, let’s talk about the food. The cheese fries ($6), made with French fries made on site, topped with a scratch-made cheese sauce, mixed with bacon and a spicy giardinara just begs for a frosty beer.  They’ve got a great local list featuring the likes of Fulton, Surly, Summit, and more.

The shrimp salad ($15) is simply fantastic; the puffy, peppery tempura shrimp over a pile of fresh mixed greens with silky roasted tomato in a tangy blue cheese vinaigrette is hard to stop eating. Crispy, cool, warm, tart, tangy, spicy—seldom is there this much flavor in a salad. 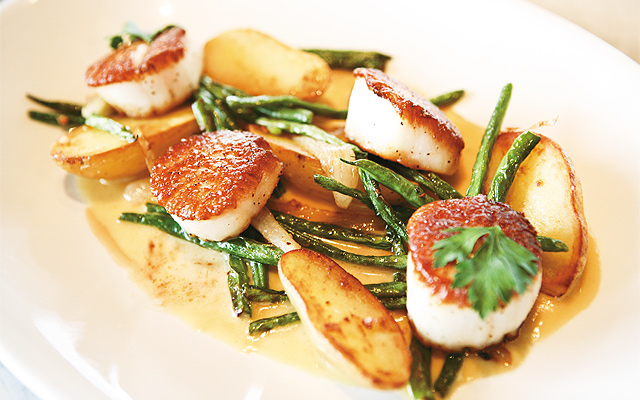 The scallops were perfectly seared and cooked, elegantly served with a mix of fennel sauce, orange buttered fingerling potatoes and garden-fresh green beans ($24). It would be a lovely date night meal.

Their outdoor space would be a perfect sanctuary for a night of cocktails with friends. There is a beautiful fire feature outside with large, comfy cushions.

No matter the occasion, if you’re a fan of comfortable surroundings, I know a great spot out in Plymouth that I think you’d like to see.

The Gray House is now open in the former Rissotto space. Hopefully, this gastropub-style spot can make this location work. Ingredients are fresh from the farmers’ market, and pastas are being made in house—there’s some serious ambition here.  610 West Lake Street, Minneapolis www.thegrayhouseeats.com

The Nightingale has also just opened and will be staying open late, serving food until 1 am for the lively Whittier neighborhood. The food will be small plates. The husband/wife team behind this effort have experience at Brasa, Restaurant Alma, and Mortimer’s bar. 2551 Lyndale Ave South, Minneapolis

El Meson suddenly closed their doors last week; we’re sad to see them go. Café Ena, also owned by the family, will carry on as usual.

Also, this may be a little bit far in advance, but there is a class I’m anxious to take at Kitchen in the Market. Bill Summerville will be teaching a wine tasting class. I spent an evening sipping wine with this world-class sommelier (who is also an owner and the managing director at La Belle Vie) once in the lounge at his restaurant and discovered I know precious little about the way wine pairs with food.  He’s an expert’s expert, and for only $60 you can spend Wednesday, December 12th  with him, sipping, tasting and learning. This one is going to sell out, so reserve your ticket at www.bookwhen.com/kitm.