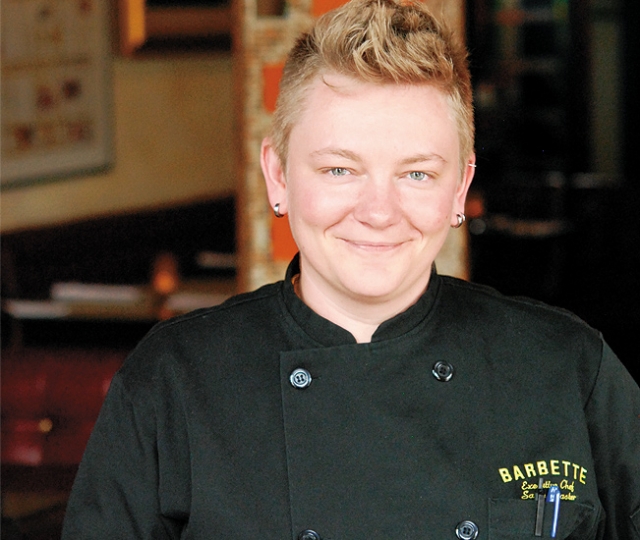 The third times proves to be just as charming as the first two. Gazing upon a beautiful spring plate of food from Sarah Master at Café Barbette it is impossible not to release a little gasp of excited anticipation. Head-on shrimp lounging on a plate, their little beady eyes beseeching, “Eat me!” They’re nestled against a pillow of risotto, studded with the season’s very first peas and a few sprigs of pea shoots. This is Sarah Master’s third tour of duty in this kitchen and she is clearly working inside her comfort zone. It’s a long way from the Iron Range, where she grew up, and even farther from New Orleans, where she found her passion as a chef and brought it back home to the line at Café Barbette.

Sarah grew up in Penguilly, Minnesota, the daughter of two teachers. She attended Hibbing High School where she was on the high school hockey team. She went on to attend college at the University of Minnesota, where she continued to tend goal on the inaugural U of M women’s hockey team. Somewhere in all that cold and ice, she decided it was time to head for warmer climates. After graduating with a bachelor’s degree in 18th Century British Literature, she was primed for the restaurant business. “I thought that I would be an English teacher, but I needed to get a master’s degree. So, I took a year off to party.” She shakes her head at the memory. 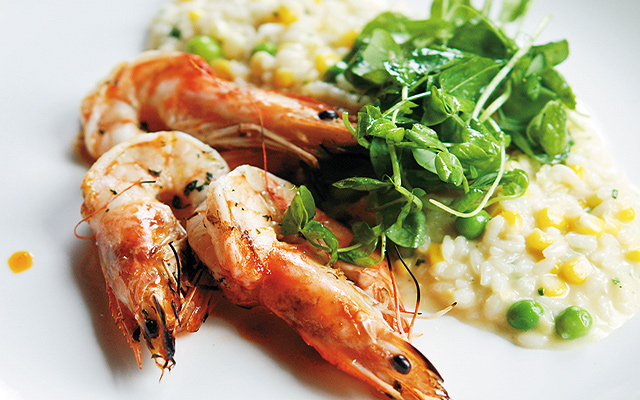 Shrimp with spring pea and corn risotto. Photo by Stephanie A. Meyer.

She headed directly to Louisiana. To earn beer money, she at first worked in the front of the house. “I was a really bad server.” She found a position working as a room service server in a hotel. Her station, waiting for orders, was in the kitchen, near the cooks. It wasn’t long before the rhythm and hum of a professional kitchen got under her skin. She wanted to work the line.

Instead of studying for that master’s degree, she attended culinary school where she honed her classic French technique. Eventually, she found she missed her family. While fine dining restaurants are non-existent on the range, she knew there were some great spots in the Cities. By this time, she had also gotten married. She lured her husband, who had grown up in Hong Kong, to the great, white north.

“The first day we moved back, it was 90 degrees. It was hot and humid. He went out and bought a shovel,” she remembers. The story would be funnier were it not for the fact that you can still buy a shovel in Minnesota in August.

Her first job back was on the line at Barbette before James Beard Award-winning chef Alex Roberts at Restaurant Alma called and offered her a job, which she accepted. From there she helped Brenda Langton open Spoonriver before heading back to Barbette to work the line with Landon Schoenefeld just before he branched out on his own. She left one more time, before being lured back for this stint. 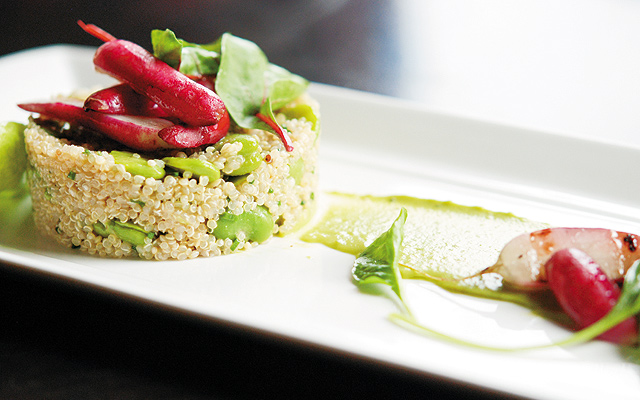 Her brand of cooking is strongly influenced by her time in New Orleans; those are the flavors she loves – punchy spice, French technique, and taste that she then turns on its ear, throwing in unexpected elements. Where the traditional dishes have a lot of heavy flavors and tons of fat, her dishes are often light with nuanced flavors. It’s a perfect fit for the neighborhood bistro, long known for their French-influenced menu (not to mention the addictive French fries). She works directly with local farms and growers, honoring the animals that they use, that every labored-over ingredient is treated well and beautifully served.

It’s very different from the food she grew up with. She ate a lot of braised pork chops with sauerkraut – that was her birthday dinner. When asked what the first food she learned to cook with, she says she was really good at opening a can of Spaghetti-O’s. When she does go home, she admits to the occasional Sammy’s pizza, a thin crust, square-cut pie that haunts this Northern Minnesota girl’s dreams as well.

While Chef Master’s career seems to always come back to Café Barbette, she still dreams of opening her own place, some day. “When I grow up,” she jokes. “There’s comfort in brasseries, bistros – that place on the corner. [Cooking] upscale comfort foods – then twisting them over on their side.” It certainly sounds plenty grown up to me.

Our one-time cover model Chef Jim Christiansen has left UNION to open up his own place alongside Lori Zinter. She was front of house manager at La Belle Vie. Their Heyday Café will take up the old Sunnyside Up Café space as well as the laundromat next door.

Marin Bar and Restaurant will open in Le Méridien downtown Minneapolis on the 23rd. From the owner of Mill City Kitchen, their tagline is “Creative, health conscious cuisine that makes you feel great – not guilty.”

Would you drive to Robbinsdale for gourmet pizza? The guys behind the critically lauded Travail Kitchen and Amusements are betting on it. Phase one of their expansion has opened. Pig Ate My Pizza is running out of the old restaurant space. It’s creative ‘za, but the lack of air conditioning, deafening acoustics, and the forced intimacy of the communal seating might be a bit much for some Minnesotans to bear.

Also, please join me in raising a glass to toast the impending nuptials of Kelly Hidlebaugh and Robbie Kearney. The lucky couple won a free wedding at Hell’s Kitchen – the first restaurant to jump up and excitedly wave their hands and offering their services the moment that marriage equality seemed like a very real possibility. This kind of costly solidarity reminds me how much I adore those lemon ricotta pancakes with a side of sausage bread.