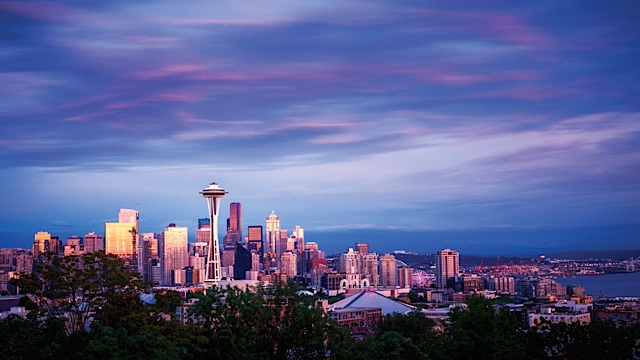 Now I know why folks are sleepless in Seattle. It’s the coffee. Starbucks was launched here and boasts shops on nearly every corner. Folks line up at the original location at Pike Place Market as if visiting the shrine at Lourdes. I grab a go-cup at my hotel, because another reason for no snoozing is that the city boasts a grande-size list of what to see and do. And eat.

Start out in Seattle Southside at Highline Botanical Garden near the airport, which, in fact, was once an airport runway. That beloved cottage garden now blooms with beds of roses, iris, lilies, and a whole lot more to calm pre- or post-flight visitors (free admission).

Speaking of aviation, the Museum of Flight is another people-magnet, with five buildings spanning ten acres showcasing over 160 historic aircraft, from the first fighter plane of 1916 to the majestic 747 Concorde. Climb into Air Force One to spy LBJ’s hat rack and JFK’s own rack of pipes, then into a space-mission training module.

Speaking of blast-off, the museum just acquired Apollo artifacts commemorating the 50th anniversary of the U.S. versus U.S.S.R. space race. Amazon’s Jeff Bezos launched the project to reclaim the Apollo 12 and 15 rocket launch engines, lost beneath the ocean for 43 years. The exhibit also displays moon rocks, a moon buggy, and astronauts’ space suits.

From space suits to Space Needle, the city’s icon, erected for the 1962 World’s Fair, anchors Seattle Center—a theme park for the culturally curious, ranging from performance halls for theater, ballet, and opera to multiple amazing museums. First, join the line to ascend the needle for a 360-degree view of Emerald City, named not only for its innovative mindset but for its pine-clad parks. Check out the hard-working harbor on Puget Sound, then scan snow-crowned Mt. Rainier. 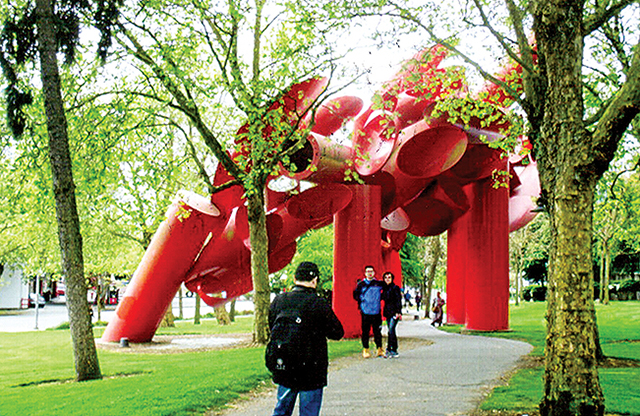 Just as otherworldly is the neighboring Museum of Popular Culture (MoPop). It’s got it all—fantasy, horror, sci-fi, Star Trek (create your own episode)—with artifacts ranging from Leonard Nimoy’s Star Wars tunic to Dorothy’s blue dress and the “skin” of the Cowardly Lion. There’s a guitar gallery and another dedicated to indie games (Super Mario, anyone?).

Head downtown for masterpieces of another sort at Seattle Art Museum (you’ll spot it by Jonathan Borofsky’s “Hammering Man” on the sidewalk). Within, it hosts a who’s who of contemporary art, including a cheeky Picasso take-off called “Desmoiselles of Alabama.” I especially treasured the collection of Northwest Native art and another dedicated to Modern African Renaissance. Super gift shop, too.

Feast your eyes on the natural and man-made art of Seattle’s cityscape via Argosy Cruise’s hour-long voyage along the hilly coastline departing at Pier 55. Then discover another art form at the famous Pike Place Market, launched in 1907 and today home to 200 stalls of arts and crafts and eats on a nine-acre site that spans 12 buildings. Feast on French baked goods, Bavarian meats, Ukrainian pierogies, and local seafood while exploring its back alleys lush with sips and bites. Among the newest: Radiator Whiskey and upscale Storyhill Coffee.

A block away at Pike Brewing Company, wander through its beer museum, then summon a flight of craft beers. If wine’s your thing, hike down to Pioneer Square’s Estates Wine Room, a former art gallery now proffering the art of the vine BTG or in curated flights. Mine highlighted Double Canyon’s Syrah and Cab plus Archery Summit’s Pinot Noir—all supple and elegant.

Head to SoDo to explore the neighborhood’s dozen wineries and tasting rooms. At Charles Smith, the 2014 Sixto Chardonnay proves he’s on his way to his goal “to produce the best Chard in the state of Washington.” Yet the state’s star is Syrah, as in Powerhorse’s estate vintage and B. Leighton’s big, dark, fruity version. 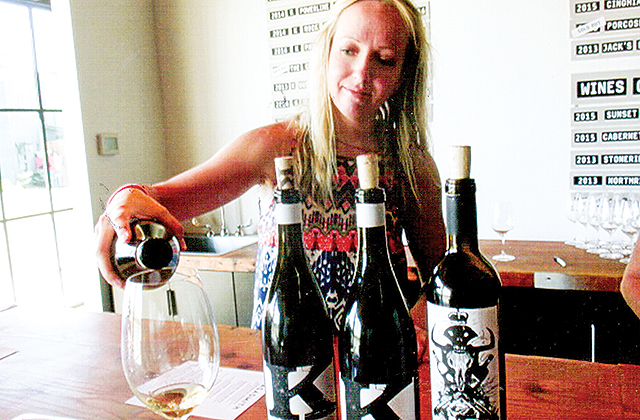 Next, Kerloo Cellars, where winemaker Ryan Crane (“’kerloo’ is a crane’s call”), formerly from Uptown, greeted me wearing a Twins cap, then introduced his Chardonnay—“a lighter, prettier wine, not a punch in the face.” Next, his peachy, Provence-style rosé, and an elegant syrah, which are all foot-stomped, he swears (volunteers accepted).

Brian Grasso, of Structure, aims for “soft, approachable, food-friendly” wines, such as his fruit-forward Bauhaus Syrah. Next, Structure’s Malbec (“Washington does so well with Rhone varietals”) and top-of-the-line Foundation Syrah (“Washington’s best varietal”). I took a bottle along to dinner that night at Lark, about which Brian told me, “I ordered the beef tartare. And then for dessert, I ordered another beef tartare.”

I can understand that. Some might call Lark the best restaurant in Seattle; others, the best in the neighborhood. Under dangling Edison bulbs fenced by tall windows, I made a meal of small plates: foie gras with pureed rhubarb and duck jus, followed by a raviolo, big as a Frisbee, plump with asparagus and atop melted leeks, nettle butter, pecorino, and a sunny egg; finally, mussels in red curry with lime, peanuts, and coconut. Yes!

Revel, a James Beard winner, blends right into its counter-cultural neighborhood with pop art on the walls of a hipsters’ canteen. Grab a seat at the counter to watch the cooks’ alchemy while slurping short-rib dumplings, pork-belly pancake with kimchi, rice bowls starring tuna or paneer, or my fine choice, seaweed noodles mined with Dungeness crab and red curry. Finish with a trio of tiny donuts built of cardamom with sweet-tart lemon curd, burnt-honey caramel, and candied walnuts.

Pac Rim’s also the name of the game at Triple Door, a svelte jazz club with food from its sister, Wild Ginger. Going with small plates again, I bolted down roasted shiitake spring rolls; chicken pot stickers attended by black vinegar; and bao buns lush with star anise-roasted duck. Add an elite cocktail and settle in.

The Chihuly site boasts a café as winning as the art. It’s called Collections because that’s what its decor celebrates: Chihuly’s personal amassment of, say, dozens of accordions that sway from the ceiling; ceramic dogs; bottle openers; pocket knives; inkwells; alarm clocks. Well, you get the idea. 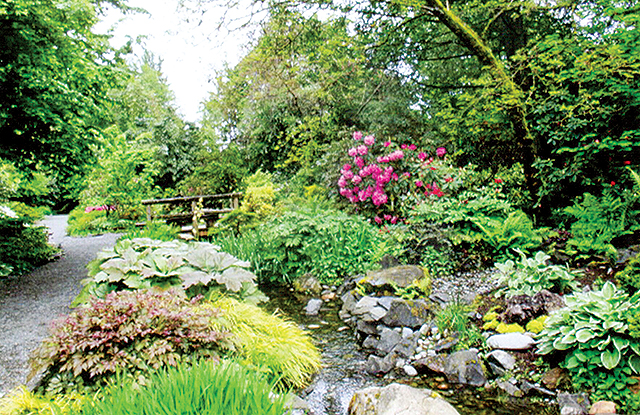 The chef’s menu focuses on what he identifies as the trend in Seattle kitchens: “Good, simple food with great ingredients from the farms across the mountains in Eastern Washington. Pike Place Market is a driving force.” What’s hot? “Korean barbecue. Dim sum. Distilling is huge. Chefs are starting to own farms, too, even growing wine grapes.” His menu reflects Chihuly’s taste for the classics: Dungeness crab cakes with apple-watermelon radish slaw, house-made buratta cheese, and (Dale’s favorite) a Northwest-style Louie salad starring more crab and shrimp.

Heading to Seattle Southside and the fare of its Asian residents, we lunched at Bai Tong, a classy Thai restaurant whose red curry—rich with coconut milk and sparked by chili paste—took me back to Bangkok. Din Tai Fung, which just opened next to Nordstrom (another Seattle-born operation) in Southcenter Mall, is the latest outpost of a family operation that harks back to Taiwan, says Manager Misun Jung, who leads me through an orgy of dim sum, starting with a bowl of rich chicken broth and tender meat, then bamboo baskets holding tiny dumplings, from pork xiao long bao to shrimp-topped shao mai, abetted by a mountain of garlicky green beans. Surrounded by Asian families who definitely know what they’re doing, I’m in heaven.

That evening, I dine at 13 Coins, a supper club frozen in time since 1972. It’s a must for everything—and I do mean everything—from oatmeal to Reubens, burly steaks to mounds of pasta, best-known for prime rib and piccatas (choose veal or, here, salmon). Everything comes with spaghetti laced with garlic butter and a side of lip from the cooks behind the counter. That’s prime seating for repartee that starts off with “Order of asparagus PLEASE SIR” screamed down the line by stand-up comics that masquerade as cooks.

Best for last: I’m staying at Cedarbrook Lodge, just minutes from the airport and the light rail station to the center city, surrounded by a forest of pines and birch. Its kitchen is headed by an alum of the French Laundry who plucks from gardens right outside my room to create standout fare like my starter, asparagus married with new potatoes and black truffle in pickled ramp vinaigrette. Next up, local foie gras with—what?—cocoa nib marshmallow, peanuts, Bourbon caramel, and banana bread. Never mind: it works. On to chili-glazed pork with fried green tomatoes, collard greens, and mascarpone polenta. Good? No. Outstanding.

On the way to the airport, pull over at Seattle Chocolates for a tour and tasting of elite flavors such as best-selling black fig pistachio or Arabica cherry espresso to dull the pain of leaving. For info, visit www.seattlesouthside.com and www.seattlegayscene.com.