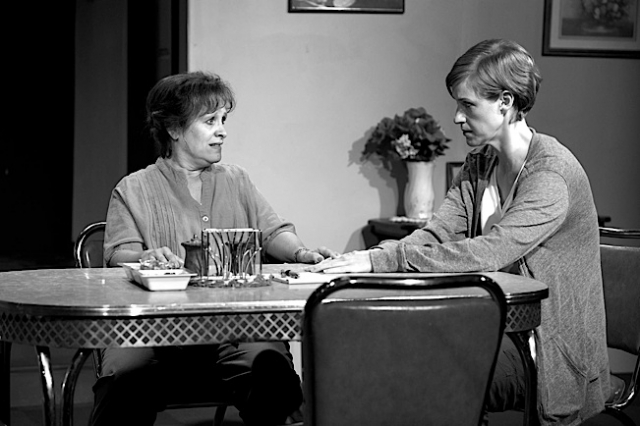 Norman gives us an adult daughter, Jessie Cates, who tends to her widowed mother’s medical and household needs. Both live uneventful days under the same roof on the family property. However, when Jessie inquires about the whereabouts of her late father’s gun, it is soon made quite clear that she intends to kill herself. This is not a spoiler as this happens early in the play.

The great challenge of ‘night, Mother is that it is written right from the get-go at an unrelenting intense emotional pitch, so it must be played from that place right from the start. Therefore, to pull it off, the actors absolutely must find various emotional levels, colors, and rhythms to what is an emotionally fraught situation from start to finish. Though this comparison crosses art forms, last year’s Captain Phillips screenplay by Billy Ray is another more recent example of this type of writing, also extremely well done. Moreover, the action is played in continuous, inexorable “real time” as Thelma and Jessie butt heads and hearts as mother passionately tries to talk daughter out of self-slaughter.

At the New Century Theatre director Matthew Greseth guides the action with nuanced sensitivity to the subtle variations that move the the play. Marcia Svaleson’s Jessie is magnetically underplayed with steely resolve underneath which we feel the torment of a woman whose despair has reached its breaking point. She is epileptic with a devastating marriage behind her and daunting unemployment issues. To make matters worse, Jessie has a grown criminal son who shows no signs of evolving past being anything but a thorn in her and society’s side. Abandon hope all who enter the Cates household. Jessie’s is a relentlessly existential, if not, pessimistic, view.

Svaleson is poignantly matched by Tina Sigel as Thelma Cates or “Momma”. Thelma is a picture-perfect image of a white woman of Tom Brokaw’s foolishly labeled ‘The Greatest Generation’. She is all about obfuscating things in service of not hurting anyone’s feelings and hence, has limited capacity for fathoming the suffering around her. She is, however, truly likable, and Sigel’s terrific performance shows that. However, as the play progresses we find she has kept painful family secrets from Jessie in the misguided service of being ‘protective’. This beautifully exemplifies the gutsiness of Norman’s writing. (Now that Wendy Wasserstein has passed on, Norman looms as the great American female playwright of her generation.)

Though the play is timeless and I predict it will be a classic 200 years from now, ‘night, Mother has an uncanny 1980s resonance with an added sense of Norman’s southwestern rural experience. The play doesn’t spell this out in any way but it’s all there in the woodwork. Contrary to Ronald Reagan’s peachy keen “It’s morning in America”, there was a dreadful sense of shattered ideals and hopes that permeated that time. This brave play and production remind us of that and they are actually very helpful in deconstructing the nature of despair. For me, the production was not depressing but clarifying.