Show Me the ‘Show Me’ State 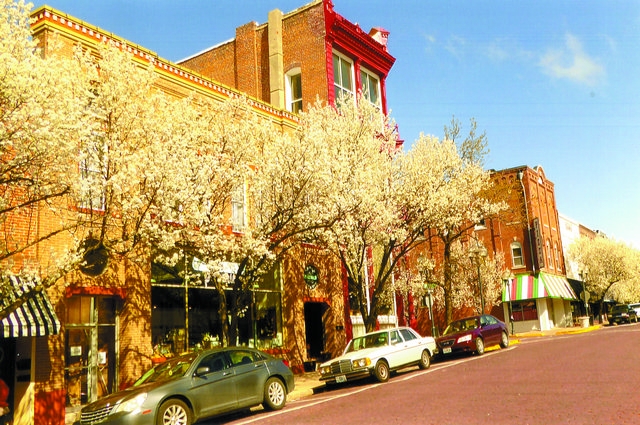 Beautiful pear blossoms are in full bloom at the Brick District of Fulton, Missouri.

“Missouri: It’s Not That Bad” reads the message on the t-shirt. Take it as a snarky attempt at crowd control here in Columbia, a college town (make that: three colleges) boiling over with artists and literati.

“Not That Bad” translates to a salivating food scene, scads of alluring indie shops, and forward galleries populating The District—the camera-ready downtown area to patrol with credit card locked and loaded.

Peel out of your hotel room at the hipster Broadway, where hallways sing with bird chirps, and stroll to the North Village Arts District—where, after a classic (“since 1934”) diner breakfast at Ernie’s (“Everybody Loves Ernie’s” is its fact-checked slogan), catch the forward Cuban paintings headlining at Sager Braudis Gallery. Snag an outlandish gift at Artlandish (think: repurposed Scrabble boards, upcycled candles); peruse North Village Artists Studios, each boasting a uniquely decorated door; pop into Wildy’s World (slogan: “Do you need a mural on your walls?”). 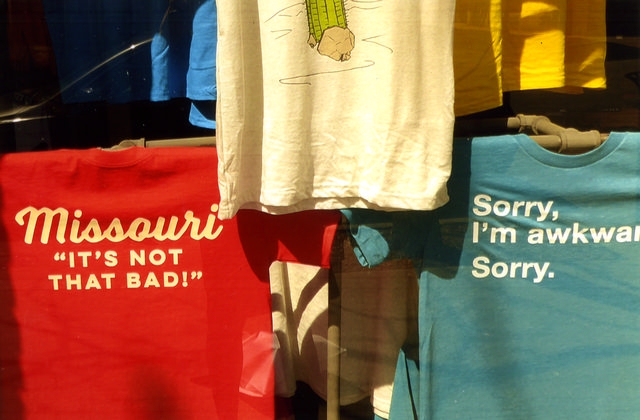 Columbus’ Acme T-shirt Company offers up a snarky sense of humor with its wares.

Center back to Acme for your statement t-shirt (another broadcasts: “Current Family Favorite”). Peruse Bluestem for creative Missouri crafts (leather journals, tweed owl, quilted “bonbons”) and Fine Arts/Antiques for Deco orange-and-chartreuse sunglasses and Mad Men briefcases. Go to Yellow Dog for used-book treasures and Tallulah for contempo kitchenware. Fuel up at Lakota Coffee after a doughnut stop at Harold’s or cone (scratch “or;” the appropriate term is “and”) at Sparky’s (spicy chocolate to lavender and honey) with a gander at bad art on its walls and crocheted animals in the cooler case. The Blue Note wafts jazz from a 1927 theater. Plenty of vintage shops too, from duds to vinyl.

Then wander to the campus of Mizzou (a.k.a. University of Missouri), with its iconic line of Grecian columns saved from a long-ago fire, and Stephens College, whose Costume Museum showcases clothes from the 1750s to tomorrow. Its current exhibition spotlights the works of Victor Costa, “king of the copycats”, who borrowed from haute couture for pieces at affordable prices. He dressed the Bush family for George H.W. Bush’s Inaugural Ball; also Meryl Streep. I just missed the show called “The Joan Crawford Effect”.

But I didn’t miss a dinner stop at Sycamore, whose bar and tables, created from warm Missouri walnut, showcase small plates of the state’s farmstead cheeses or gnocchi studded with sugar snap peas and pea shoots, and a $30 prix fixe which segues from lively greens to ale-braised short ribs to flourless chocolate cake or creme brulee. Did I mention designer cocktails? 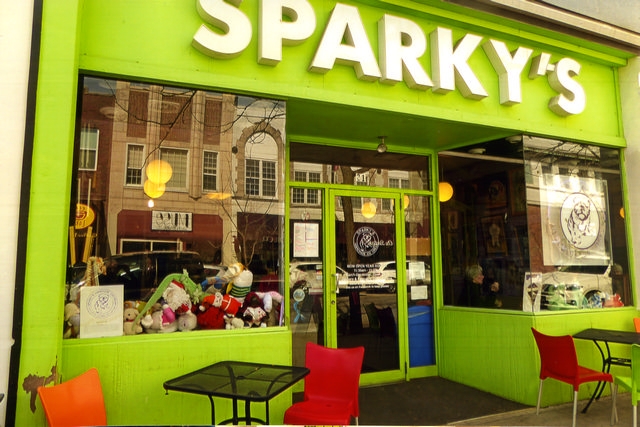 Sparky’s is considered by many to be the best ice cream shop in Columbus, Missouri.

Barred Owl (“Whooo cooks for you?”) debuted in 2016 as a butcher shop-cum-mecca for don’t-miss eats that start with homemade dinner rolls; deviled egg loaded with country ham and pea shoots; and crocks of pimiento cheese, on to entrees that climax in a plate of spicy shrimp & grits or veal rib chop with roasted brussel sprouts and bacon. Uprise is a hippie 2.0 bakery café dealing in super soups and salads, too. And don’t miss tiny, under the radar Café Poland, where Ilona will feast you with pierogi, borscht and espresso, just like in her homeland.

Not only is Columbia a college town, it’s a festival town. I was on hand for Unbound, its book festival. Others careen from film fest Citizen Jane, celebrating women in film, to True/False—an iconic documentary spree—and Roots N Blues N BBQ. Check out www.visitcolumbiamo.com to get going. Added inducements: gay bars Arch & Column—quiet (until karaoke night), and Yin Yang—flashier, with dance floor and drag shows.

Credit goes first to Westminster. It’s an elite university, similar to Minnesota’s Carleton, with a history of inviting illustrious notables to deliver its annual lecture. In 1946, they decided—what the heck?—to invite Winston Churchill. To weigh in on the invitation, then-President Truman penned a footnote: “Come!” And the great Brit complied. He delivered what became his famous Iron Curtain speech, igniting the Cold War. 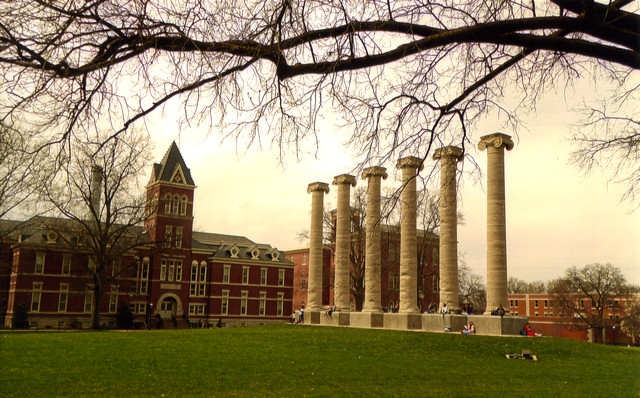 The iconic pillars, the survivors of a disastrous fire, stand tall on the campus of the University of Missouri.

To honor the occasion, the National Churchill Museum was founded. It documents the story of his life: a lonely childhood followed by not college, he wasn’t the type: rather, military academy (after he’d failed its entrance exams. Twice.) He went on to oversee Britain’s fleet during World War I (another failure), then a career in Parliament, when he foresaw Hitler’s dangerous rise. Then London’s blitz, and more.

Newsreels cover Fulton’s motorcade and address, abetted by artifacts from his life and some of Churchill’s paintings. The Midwest premiere of Darkest Hour was held here. Other speakers, over the years, include luminaries from J. Edgar Hoover to Gorbachev. Like moi, many overnighted at the Loganberry Inn (Margaret Thatcher, Polish premier Lech Walesa), whose owner has stories to tell over breakfast.

Speaking of the Iron Curtain: cheeky little Fulton also asked for, and received, a segment of the Berlin Wall, now on display, and a historic church designed by London’s starchitect of the 1600s, Christopher Wren. Walk right in.

Stroll over to The Brick District to discover the unexpected on the retail scene like oneCanoetwo, a letterpress whose artists create calendars, cards and fabrics (they also sell to Anthropologie). Or Unkamen, which sells jewelry supplies globally and onsite, including earrings created from watch faces and maps on cufflinks. Find sassy gifts at Smockingbird’s and old-time sodas at Saults, a drugstore since 1937.

Dining? I admit I was a bit suspicious when invited to Fontinenot’s for Cajun fare. But yes indeed, the proprietress hails from Lafayette, Louisiana, and so do her recipes—po’ boys to gumbo, fried green tomatoes to fried oysters, backed by coffee shipped from Café du Monde. Same goes for Fulton Café, which showcases the cuisine of Cuba, where Jimmy’s mom was raised. Proprietor Jimmy grew up in Miami’s Cubano enclave and serves his puerco asado and carne con papas with sides of rice, black beans and plantains. Bek’s goes all locovore with its tasty lamb chops, attended by ancho-roasted sweet potatoes and crème fraiche. Uber-cosmo cocktails, too. Go to www.VisitFulton.com for more information.