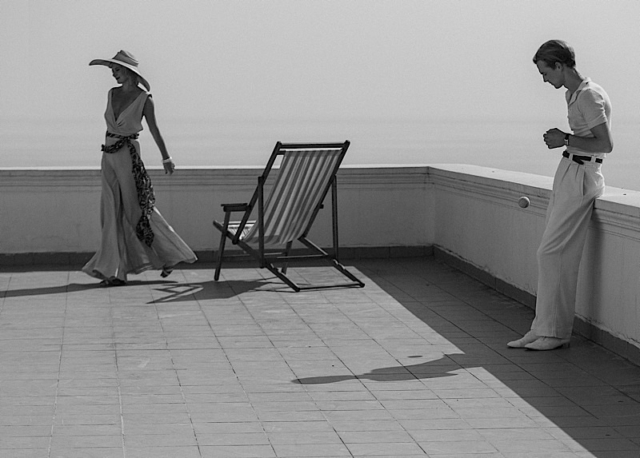 Russian filmmaker Andrei Konchalovsky made his mark on the world 40 years ago with Siberiade during the Soviet era. In 1985 he directed Jon Voight in what may be the actor’s finest performance in the thrilling Runaway Train. Two years later Shy People won Barbara Hershey the Best Actress award at Cannes. His brother is another Soviet filmmaker icon, Nikita Mikhalkov. And Konchalovsky’s association with Soviet film giant Andre Tarkovsky is fabled. You see Tarkovsky’s influence throughout his oeuvre.

All these decades later Konchalovsky reflects on the French Resistance, anti-semitism, and Russian experience in The Great Patriotic War, better known in the West as World War II. However, in Paradise, released in 2016, the settings are hardly that. It follows the dark odyssey of Olga (an enigmatically fascinating Julia Vysotskaya), a Russian woman who protected some Jewish children from Nazi soldiers. For this protective impulse, this gentile pays dearly in a concentration camp.

Olga is descended from the old Tsarist era aristocracy and by chance she becomes the idealized infatuation object of Helmut, a prestigious young SS officer descended from archaic German nobility. Helmut is the prototype of the naive gentleman of elitist privilege and codes.

The beguiling Christian Clauss shows how a sheltered life can render one oblivious to the perversity of an authoritarian movement. His Helmut is a textbook example of how a useful idiot who doesn’t know himself can rise in position.

When Helmut is tasked to root out corruption among concentration camp staff he begins to creep toward an awareness of the evil that congeals the whole sadistic Nazi enterprise. He even seems to encounter encroaching dark spirits at one point.

In one knockout scene, Fogel, a tormented friend from Helmut’s comfortable past calls him on it. However, this isn’t a predictable tirade. Rather, he articulates Helmut’s self-deception with uniquely piercing insight. Fogel is played to raw, wrenching effect by Jakob Diehl.

This scene is one of several with profound dialogue organically delivered. Co-writers Konchalovsky and Elena Kiseleva have scripted passages that compel, such as one where Helmut speaks directly to the camera about reasons why Germany fell for Adolf Hitler. Olga has similar passages delivered by Vysotskaya with naked emotional truth. Aleksandr Simonov’s camera work in these particular sections recalls cinematographer Sven Nykvist’s approach in the films of Ingmar Bergman.

Underneath the depravity of it all the characters cling to mental shards of some fantasy of happiness and renewal that will surely ultimately reveal itself when the war is over. Unfortunately, it’s the end of the dream. Visions of utopia ironically were instrumental in stoking the fiery furnace of the Third Reich to begin with. As well as the Communist nightmare that Olga’s family would have had to have navigated in her Russian homeland.

Few films use language and spoken thoughts so richly while relating intense action. This marvelous verbal element is majestically matched with Simonov’s dreamy black and white cinematography. We’re washed in the cinematic look of the actual era Paradise takes place in. Film noir motifs circulate throughout. The harrowing contrast between highly civilized behavior patterns of power brokers and the grisliness of social breakdown is disturbing. Maids in uniform. Classical settings where Nazi soldiers look sharp in military garb. Limousines. Having breakfast at a table set with fine dishes as if the preceding century were still in motion. Then there are the death camps, hysterical Jews being rounded up from the barracks and into the ovens, and Jews dragged like sacks of nonhuman substance.

Olga is reduced to trading intimate physical contact with another woman for death camp contraband. Stronger women prisoners are shown the way in which they must kick weaker ones who break the rules. Within this earthly hell Olga and Helmut advance toward polemically opposite spiritual conclusions. These conclusions might just take you by surprise.