Shamir: More Than a Hot Mess

Sound check was over, but Shamir was still seated on the edge of the stage, tinkering on his guitar. A less familiar First Avenue, spacious, empty, and lit brightly with fluorescents, was a quiet space to talk. In the two weeks leading up to our interview, Shamir’s tour schedule took him to Santa Ana, Las Vegas, Los Angeles, Portland, Vancouver, Seattle, Denver, Kansas City, and now Minneapolis. 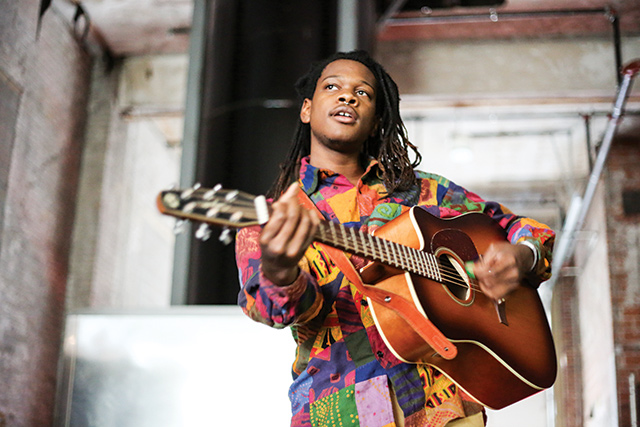 “I’ve only been doing this for a year, so I’m getting used to the life,” Shamir shared. “Twice already on this tour, a drunk person has come up on the stage and started dancing. The first time the dude was cool and left after the song, the second time this other guy would not leave and security had to get him, I was like ‘Oh, Lord.’ It’s not something I’m trying to stop completely, but if it happens, it happens.”

While his talent has been known internationally for just over a year, the Las Vegas-grown musician, has been making music since his early teens. After sending a demo out in the summer of 2013, Shamir was flown to New York by Brooklyn-based indie label, Godmode. His first EP, Northtown, received overwhelmingly positive reviews and garnered him a deal with XL Recordings for his first full-length studio album, Ratchet, which released in May. In the past year, Shamir has appeared on Andy Cohen’s Watch What Happens Live, France’s Live du Grand Journal, toured with Marina and the Diamonds and Years & Years, interviewed with Glamour and Vogue, and balanced countless other press and concert obligations with his busy touring and recording schedule.

Shamir paints a quaint picture of his upbringing in North Las Vegas, far from The Strip, where “there’s nothing to do.” Largely self-taught, from a young age Shamir never shied away from learning something new. “Lately, I’ve been starting with lyrics, but guitar came first. I taught myself piano; I’m still not that good. My [aunt] got a keyboard, so when I came over, I’d play. I write the best at night, alone in my room.” 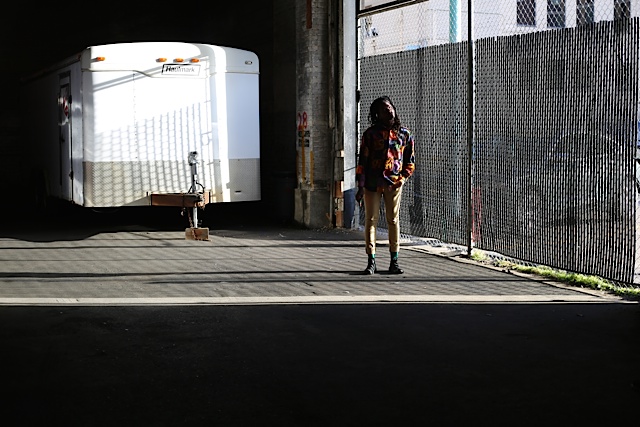 Though down time has become scarce, family and friends are a priority when Shamir is home. “My friends and I have dinner parties, because when I’m gone, they’re starving. None of them know how to cook. As soon as I get home they’re like, ‘Shamir, cook for us!’ So I’ll make them a whole feast: potatoes, broccoli and cheese, a whole chicken.” A self-described “old person,” cooking is well accompanied by knitting and crocheting as Shamir’s recreational pastimes. “I just crocheted a beanie and scarf. It’s grey, so it goes with my grey jean jacket. I always do matching scarves and hats, It’s kind of my thing. I love it, it’s very relaxing for me.”

The first thing often pointed out about Shamir’s music is the lightness of his voice. Highly melodic and a bit androgynous; for Shamir, it comes from a plain truth. “My voice just never changed.” It’s no secret that the music industry likes to put people in boxes, and for an artist like Shamir, his distinctive voice, gender, and sexuality are likely to become exhausted topics. “Being compared to Prince is super flattering, but I don’t really see it. I think it’s a very surface comparison.” A comment serendipitous to a room where Purple Rain was filmed, Shamir’s sense of humor became more apparent as we moved to First Ave’s private garage, where his tour bus was parked. “They get us hotel rooms, but I kind of like sleeping in the bus. It’s like being in a coffin.”

Shamir is likable. This is an innate truth. Whether people are pulled in by his visceral music videos, his potent sound, or his boyish charm, Shamir’s fan base is growing at an alarming rate. In watching his show that evening, an enraptured audience mouthed every word and interacted with Shamir with an enthusiasm that’s rare for an artist so new to the scene. What impressed me even more was the diversity of the audience. Fans of all ages, genders, and socioeconomic backgrounds gathered to bounce to songs like “On the Regular,” to jump to “Call it Off,” and to sway to “Darker.” 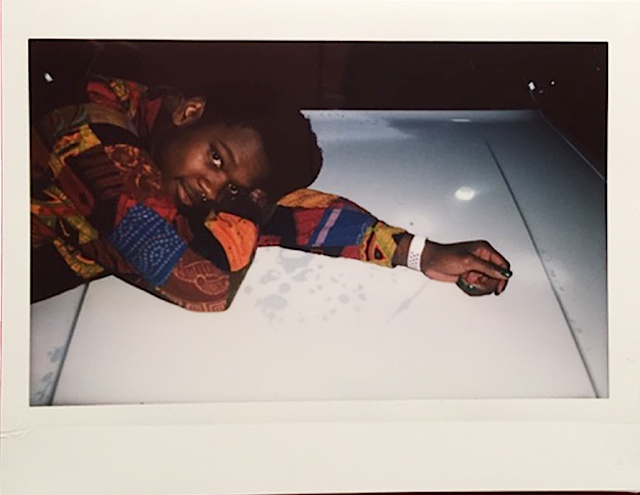 In speaking and sharing space with Shamir, a great deal of gratitude runs through his every word. In a world where so often queer artistry and social activism are expected to run hand in hand, it’s my hope that as Shamir is catapulted into the spotlight, the focus remains on his brilliant work. At the end of the day, it’s not his responsibility to be the face of a queer movement or the voice of a new generation. He’s not a young Prince or a Nina Simone. He’s just Shamir, and that’s powerful enough on its own.

In his own words:

I like a lot of vintage, I like to thrift. I do have a stylist. She runs a thrift shop, so most — if not all — of my wardrobe is thrifted.

I call “Hot Mess” an autobiography, kind of like a song to myself. All the things that annoy me about me. It’s also about embracing my imperfections and encouraging other people to do the same.

When I go to Philly or New York, I go to a lot of DIY shows. After this tour, I’m thinking about staying in Philly.

I’m waiting for him to hit me up. He has my number. Mac De Marco. I saw him when I was eighteen and was instantly obsessed. I’m also obsessed with Marina and the Diamonds. I’m going to get a Marina and the Diamonds tattoo while I’m on tour with her. I’m going to make her watch me while I get her lyrics tattooed on me. One of the first times I met her, we were at a dinner and she pulled me off to the side and said, ‘I hate everything, but I love you.’ She’s super cool, super funny.

I’m so bad when it comes to my visuals, it’s why I work with the same director, because he’s a friend and he knows everything I like. “In for the Kill” is the best one so far, because it has a story line. It was also funny, because I was only filmed in the spaceship, so we have this whole beautiful video with extras that I’ve never met.

I can’t dance. Not only can I not dance, I just don’t like dancing.

My mom is an earth, magic, witch. She doesn’t like when I call her a wiccan, apparently that’s a different thing.

I think I’ve said a lot to the world already.