An Interview with Charity Jones

Charity Jones is known for her luminous performances in plays like The Sex Habits of American Women at the Guthrie Lab and The Sisters Rosensweig at Park Square. But she never has been as deep and vulnerable as in Joe Dowling’s current Guthrie production of Shadowlands. William Nicholson’s Tony-nominated biodrama of Christian theologian C.S. Lewis’s doomed marriage features Simon Jones (no relation to Charity Jones) as Englishman Lewis and Charity Jones as American Joy Gresham Davidman.

I spoke with Jones about the play’s wrenching depiction of suffering, death, and dying. 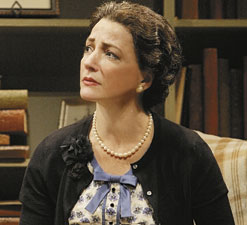 The concept of suffering is central to Shadowlands. It makes me think of how suffering is also a central theme in Buddhism, but here, we see suffering from a Christian perspective.

It really is a Buddhist concept. [Davidman’s] line that is quoted everywhere in the literature [about her] is that pain then is part of the happiness now. That’s the deal. That strikes me as very Buddhist. C.S. Lewis spent a lot of time working on the issue of suffering with a kind and loving God, and how does that work. He initially wrote The Problem of Pain [1940]. It’s justifying, and it’s explaining why God not only permits suffering, but requires suffering to get to the next place. It’s very interesting to read his thoughts on suffering then, and then read A Grief Observed [1961].

Which he wrote after Joy’s death of bone cancer. He certainly has his doubts at the end of the play.

Oh, yes. He did in his later years actually struggle with a lot of doubt. That’s when C.S. Lewis’s brother, Warnie, learned to love her, when she was ill—because she never complained about it. She was joyful all the time, and her faith was really strong at that point. Then, of course, she was with [C.S. Lewis], the man she absolutely adored.

When she first meets C.S. Lewis in the play, what is she looking for? What draws her to him? Is there a sense of destiny? Is it about a father figure? It’s mysterious.

It is. And it’s a difficult question to answer, because the reality and the play are two very different things, and I have them all mixed up in my head. But she initially went to England, I think, with the whole intention of hoping to meet him. But that isn’t the whole purpose of her going to England. She went because of health reasons, and she was encouraged to step away from her life. She actually didn’t take her kids with her that first trip. But she had been reading his work.

They had a mutual friend—a man named Chad Walsh—who wrote a book about C.S. Lewis. She was friends with [Walsh]. And she kept asking questions about C.S. Lewis’s ideas and philosophy and stuff. [Walsh] said, “Don’t ask me. Ask him. Write a letter. He answers letters.” So, she started this relationship with him through letters. She was not at all in love with him before she met him. She did not have any ideas in that way.

I think she just went to meet a spiritual guide. She was ethnically Jewish, but grew up an atheist. But had these spiritual experiences, and through her studies, determined that Jesus was the only explanation for her. She liked what she read in C.S. Lewis’s work, so he really shaped her idea of Christianity.

She was also a Communist, and that comes through very little, except in the scene where she lashes out…

…about the school. She says the educational system in this country [Great Britain] is prehistoric. The boys at her son Douglas’s school liken going to the university to going to the moon. She says all the children should be able to go to school, including girls.

The men in the play are often callous and dismissive, but as Joy burrows into their realm, she seems to be rippling that apart.

She’s walking into Oxford—this cloistered environment. Old dons—there aren’t any women around, and they’re comfortable with that. Some are married. Some are not. But women aren’t a part of the culture there. That’s a very specific thing that she walks into, and busts up. And she does bust it up!