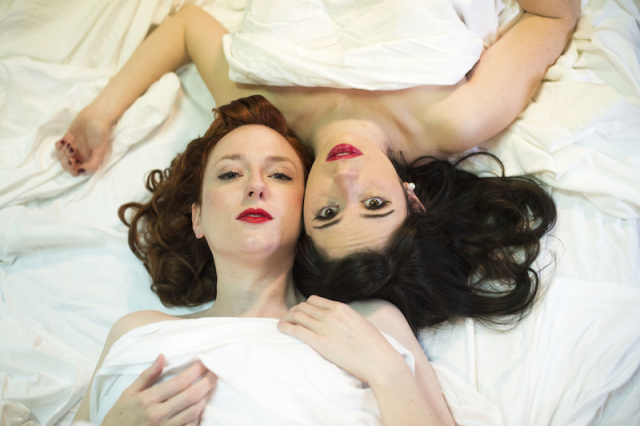 Known for the creation of thoughtful original works, in their latest production of June, Savage Umbrella is unabashed in their approach to themes of identity, sex, fear, and what it means to be a queer woman in the middle of the 20th century. The show promises to be as intellectual as it is provocative. We were lucky enough to chat with Savage Umbrella’s Artistic Director Laura Leffler-McCabe on what June brings to the table.

LGBT themes are a large part of June‘s story. What inspired the initial development of the work?
Laura Leffler-McCabe: Initially there was a single image that was the first spark of June: June Cleaver in handcuffs and a bloody knife. Now, that image has nothing to do with the story we’re telling. During the 2014 workshop we became interested in secrets, and in a night club singer who sings at a lesbian bar. Workshop audiences wanted to know more about this singer and more about that bar, and so did we. We really trimmed everything else away, and now, the story is only about the bar and the women who call it home. It’s really about this place in time: feeling stuck, spinning, moving forward.

What kind of outside research or materials were beneficial in the creation of June?
LLM: We are hugely indebted to many sources. Early on we read Odd Girls and Twilight Lovers: A History of Lesbian Life in 20th Century America, which is a wonderful book. We also read Stone Butch Blues, Highsmith: A Romance of the 1950s, Inventing Lesbian Cultures in America, and so many more. We held personal interviews with queer women in the Twin Cities, and read online articles on Autostraddle, Out History, and Lost Womyn’s Space.

The development workshops you produced for June in 2014 were undoubtedly beneficial to the creation of the work.  What do you feel is the biggest way the work has changed in the fully produced incarnation?
LLM: The workshop was really about these housewives, and there were a few characters on the margins of the story who were queer. The biggest thing our audiences said was they wanted to know more about the queer characters and their lives. So we overhauled things — cut many characters, added more, and then shifted the focus to be solely on the queer characters.

What ideologies or mantras are important to the company when approaching the collaborative experience of devised theater-making?
LLM: We believe the best way to create new work is with people you trust, so we have a company of makers. In the June cast there are eight women. Four of them are company members and four are guest artists. So we have a lot of people who have made work together before. There’s a short hand and a common vocabulary that comes with that, which is invaluable. At the same time, we believe everyone has a voice and every voice has a place. We work hard to integrate our guest artists into our way of working and making. The thing we say to each other most of all is, together is better than alone. We make the work together, and both the process and the product are the better for it.

What was the greatest challenge in the creation of June?
LLM: We got about two weeks into rehearsals and realized, oh, we’re only touching the tip of the iceberg. There is so much to tell. There are so many lost and little-known stories that deserve a spotlight. Just in our own rehearsal room, we knew that we had enough material to make eight plays, one focusing on each of the characters. So the greatest challenge we had was how to edit and streamline the material to make the clearest piece we could.

June runs Feb. 12–26 at The Southern Theater. Tickets to June are on sale at www.southerntheater.org.