They don’t call this the Land of Enchantment for nothing. The luminous landscape of Santa Fe, a magnet for painters, similarly seduces visitors with its powerfully austere vistas, punctuated by adobe walls and the scent of chilies roasting in the open air. 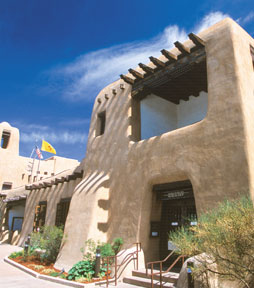 Low-lying and compact, it’s easy to “own” the city, and relive its rich Southwestern history by tramping its byways. But not to worry: They all lead back to the Plaza, the city’s outdoor living room, where mariachi bands tune up, tango dancers swoop, and Indian silversmiths spread their wares on blankets. Once carpeted with cowpokes and cattle, it marks the end of the Santa Fe Trail, but the city’s history begins far earlier—in 1610, in fact—making it the oldest settlement in America. (Sorry, Plymouth Rock—they beat you to it.)

It’s faced by the Governor’s Palace of 1610, the oldest public building in the country—and open to tour—along with scores of other “oldests” in the nation: San Miguel, a stark and entrancing church, whose stucco walls and beamed ceiling show off an altarpiece of faded saints; and, around the corner, the country’s oldest house. In fact, the town is a mélange of Pueblo Revival sand-castles in various variations of beige.

To gain a foothold on the town’s rich history, join a walking tour that traces the path from Indian to Spanish Colonial to the pioneers and profiteers from the East. Jeff, our docent, led us past San Francisco Cathedral, a faux-Gothic indulgence of a self-important bishop, forged onto the tiny original chapel of 1714 that houses the revered statue of La Conquistadora, AKA Our Lady of Peace, brought from Spain in 1625, and today a fashion statement in a red dress and white purse.

Next, peek into the brand-new New Mexico History Museum to fill in the blanks. Artifacts and photos liven the story, leading from original Native dwellers and Spanish Conquistadors—in the name of gold and converts—to get-rich-quickers from the East (including Billy the Kid); the advent of the railroad; and the super-secret (so they thought) Manhattan Project at nearby Los Alamos, capped by a photo of the first atomic bomb explosion.

Since the early 1900s, though, the town has had a love for art. Thousands of painters took one look at the magical sunlight ricocheting from a bluer than blue sky to the sandy hillside, and set up their easels. Today, artists of all stripes outnumber bank tellers and office drones (in fact, I couldn’t even spot a bank at first—they’re all disguised as haciendas). Follow their story in the Museum of Fine Arts—actually a treasury of political and social commentary as much as a storehouse of canvas, including the “calendar art” of Easterners who romanticized the Noble Savage, counterbalanced by works of modern Indians, combating racist images with works like a peace pipe constructed of discarded plumbing parts, works decrying AIDS, and those with strong feminist statements. 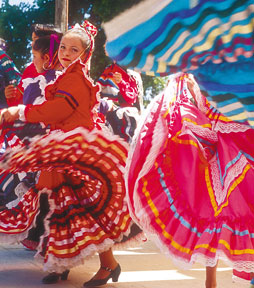 Oh, there’s also Georgia O’Keeffe and the Harley that caught her fancy. But she’s got a museum of her very own, livened by her quotations: “Nobody told me it would be like this….As soon as I saw it, I knew it was my country.”

Vastly different art is showcased on Museum Hill, with buildings housing Indian, Spanish Colonial, and—best yet—folk art, collected by a singular man with a maverick eye. Peek inside the nearby State Capitol, too, where the works of contempo New Mexican artists of arresting talent line the walls, in order to test-drive before you pull out your VISA.

Then, head for Canyon Road, across the foot-wide “river” that trickles through this parched corner of New Mexico. I joined a walking tour that winnowed the best of the best among the scores of galleries, representing art of all stripes, from classic to avant, backed by funky folk art and Indian works, both antique and tomorrow.

More art is to be had—are you ready?—along Guadeloupe, the avenue that leads to the newly, creatively, reclaimed Railyard Park: hip works for home, wall, or body by young up-and-comers, as well as a grand new bike-hike trail along the former tracks, a farmers market, and wine bars. Vintage shops sell gently used cowboy boots, Stetsons left behind by the many movie crews that film here, and those sexy snap shirts you’ll want to wear to loud-and-lively Cowgirl BBQ, the (very) gay-friendly Guadeloupe bar with dynamite margaritas and waiters to match.

To get the latest dish on boy-friendly clubs, talk to Walt and Wayne, who run El Farolito B&B and its brotherly B&B, Four Kachinas. In fact, an entire gay-focused retirement community here is called Rainbow Vision. But wander anywhere and everywhere, and you’ll be welcome. As they told me, “Our streets are narrow, but our minds are not.”

Which begs the question, red state or blue? The issue fails to ignite much passion here. The most pressing issue, instead, is red or green—as in the chili sauce that blankets everything but cornflakes (or maybe I just missed that).

The next dining dilemma is: Mexican or New Mexican? Fortunately, both are superior.

For traditional, unfused Mexican menus, head for Tomasita’s in the Railyard, occupying a brick station house of 1904, and serving cold margaritas and hot chili, as the menu warns first-timers. Get your fix with the blue plate special, showcasing a chili relleno topped with green chili paired with a blue-corn enchilada in red chili sauce.

Guadaloupe Café serves chili on every—and I do mean every—dish, including the supersized huevos rancheros. Ask for it on the side? Dream on, the menu instructs. Ain’t gonna happen.

Over at Tia Sophia’s, an old-time greasy spoon with worn wooden tables that attest to its popularity, both red and green fuel the burritos (Tia Sophia claims to have invented the art form), enchiladas, and such. 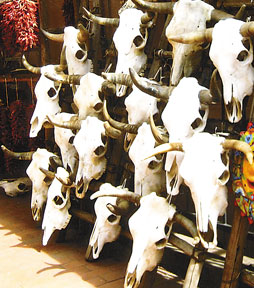 The Plaza Café, an institution since 1905, with press-tin ceiling and drugstore tiles, serves its heaping platters “Christmas-style”: both red chili, with its haunting, smoky heat, and green, a brighter, tarter version. Complaints? The phone numbers of the mayor, governor and senators are posted on the wall.

No complaints at Bumble Bee, either. The food is both fast and fresh in this short-order dive, done up in the colors of fiestaware, and supervised by piñatas of mammoth bumblebees. Try the lamb and the fish tacos, to sauce yourself from the vibrant salsa bar.

Or go to The Shed, historically a burro shed, and since 1953, a café rightly renowned for its red chili-blue corn enchiladas, made from peppers ground in the kitchen. Goes down well with a local Santa Fe Nut Brown Ale.

Next door, and up the culinary ladder, reigns Casa Sena, another historic building—but save that for when (if ever) it rains—and head for the romantic, twinkle-lit patio to indulge in New Mex fare like pine nut-crusted goat cheese; crab cakes in chipotle-mango sauce; and palate-fresheners that include mango-jalapeño and pomegranate-pasillo chili granitas before trout baked in adobe with guajillo chile-sunflower kernel risotto.

Nearby, the Inn of the Anazasi’s chef has won his whites with refined New Mex dishes like a vibrant spring pea-green chili soup with mint crema; duck enchilada in mole sauce; and Mexican prawn risotto with poblanos and queso fresco. And those are just the starters!

One last meal: Café Pasqual’s, of course, the Miss Congeniality of the dining scene. Humming with bright Mexican tiles and Chagall-meets-Mexico murals, it’s a homey setting in which to enjoy breakfast all day, like eggs barbacoa with arbol chilies, or huevos motulenos—egg-topped tortillas with black beans, sautéed bananas, feta, and roasted tomato-jalapeno salsa, served with green chili. Best seat in the house: the communal table, rubbing forks and elbows with the locals who consider this place close to heaven.

Nice to know: No longer must you find your way here overland from Albuquerque. At long last, Santa Fe boasts airport service, launched by American Airlines. So, fly in to shop till you drop, gawk till you’re cross-eyed, and eat till you burst. Don’t say I didn’t warn you.