When the Minnesota winter got too cruel, many people looked for opportunities to venture away from our frozen tundra. After viewing one beach picture too many on social media, my fiancée Krissy found us some cheap tickets to San Diego, where the weather promised to be 70 degrees at all times. When the glorious day of our vacation arrived, we gleefully traveled through snow and slush to board our plane, swimsuits and sandals in tow. As we basked in the glory of the California sun, we adventured through different areas of San Diego, delighting in the unique activities each area had to offer. Here’s our affordable and adventurous list of the best things to do while exploring San Diego, California in any season of the year.

The Basics: Where to stay, how to get around

We stayed at Inn at the Park, a historic, GLBT-friendly hotel consisting completely of boutique suites; each room has a glorious bathroom and kitchen decorated to evoke a glamorous 1920s feel. We delighted in waking up with the sun streaming in from the huge windows and preparing some coffee before starting our adventures. The hotel staff is friendly and welcoming, and the concierge provides the best suggestions for local restaurants and GLBT bars, and can even point you to the most romantic places to watch the sun set over the ocean. Located right across from Balboa Park, free street parking for the hotel is ample, but a very affordable valet service is also available. We found it easy to park on the street and explore the Hillcrest neighborhood on foot. From the exceptional, personal service to the beautiful rooms, Inn at the Park provides a pleasantly surprising hotel experience. 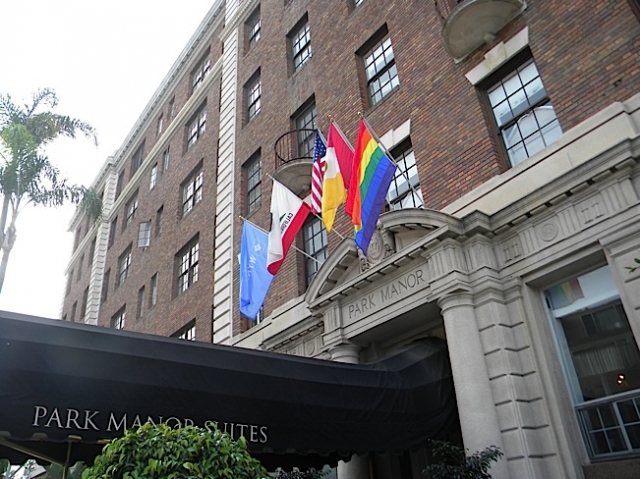 The Pride flag proudly flies over Inn at the Park, a GLBT-friendly hotel in Hillcrest. Photo by Krissy Bradbury

Our vacation was as fun-packed as possible, thanks to the prime location of our hotel in the Hillcrest neighborhood and the beautiful little Prius we rented for the week. Though San Diego has public transit, we found that a car was the quickest way to get to the beaches and to the outer areas of San Diego. The roads and highways were well-maintained and rarely crowded, and free parking was abundant near the beaches and around Balboa Park. The best part about renting the Prius was the mere $12 it cost to refill the tank after a week of car rides.

The Hillcrest neighborhood is the best place to be if you’re GLBT! Dubbed the official GLBT neighborhood of San Diego, Hillcrest is full of shops, restaurants, bars, and boutiques that welcome people from all walks of life. As a mostly residential area, Hillcrest was safe and clean at all hours of the day and night. The nightlife was especially hoppin’ on the weekend, with drag queens and queers streaming down the sidewalks to one of many gay bars.

Though the dining options are endless in Hillcrest, we fell in love with a tiny storefront called Oscar’s Mexican Seafood, which sells amazing fish tacos. The delicious food was served up by the sweetest young men that even the gayest of ladies would consider to be eye candy. We also stopped in at Hillcrest Brewing Company, the first gay-owned and -operated brewery in the country, to have some craft beer and pizza. To our delight, all the menu items were named after naughty gay puns. Krissy fell in love with the Crotch Rocket Irish Red while I favored the Banana Hammock Scotch Ale. We struggled to choose one pizza out of many delicious options and settled on the BBQueer Chicken pizza, though the Meat Packer and the Sweet Hot Pig were tempting. Fortified, we explored the neighborhood at dusk, passing The Gossip Grill bar, which was packed to the brim with queer women. Word on the street is that Gossip Grill’s “Finger Me Friday” event is the best ladies’ night in Southern California. 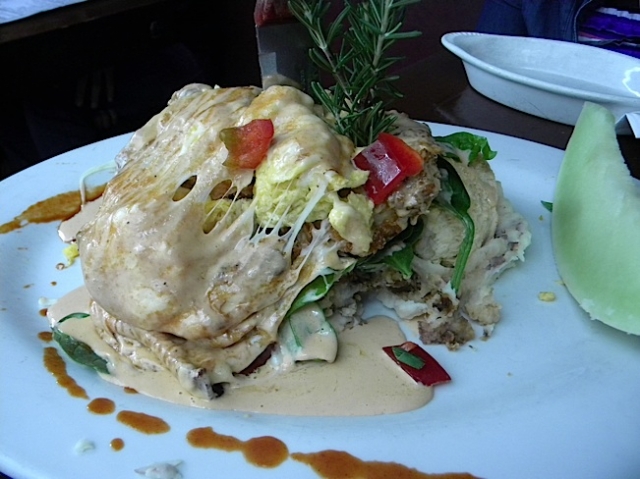 In a league of its own stands Hash House A Go Go, a restaurant with food so life-changing that you have to plan to eat there more than once. We went for breakfast two days in a row, and it took all our willpower to not go again. With reasonably priced, ginormous portions that can only be described as indulgently excessive, we struggled both times to finish one plate between the two of us. On our first trip, we chose to share Andy’s Sage Fried Chicken Benedict made with farm-fresh ingredients. The crispy, succulent chicken was made even more heavenly by the decadent hollandaise sauce that oozed over a scratch biscuit. We waddled out of there with huge grins plastered on our faces, only to return the next morning to try the Butterscotch Almond Flapjack. Measuring over 14 inches in diameter, I barely made a dent in my half before I experienced an extreme sugar rush that was totally worth the eventual sugar crash. Though Krissy made a very respectable effort to eat the majority of the flapjack, we were able to save a portion large enough for a midnight snack that evening. (And yes, it was still magically delicious.) Don’t be deterred by the wait at Hash House A Go Go; either get there early or join the throngs of people sipping on free coffee as they wait outside the small venue. You’ll be glad you waited around for what is arguably the best breakfast ever. 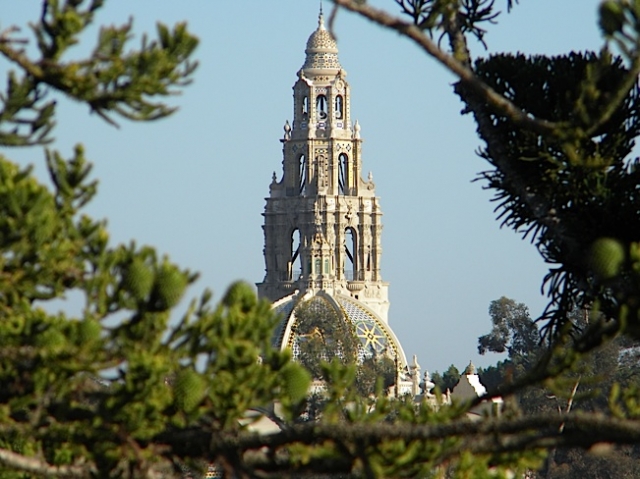 The Museum of Man stands out in Balboa Park. Photo by Krissy Bradbury

Balboa Park
As the cultural center of San Diego, Balboa Park holds most of the city’s museums and gardens. This urban cultural park was the home of the first World’s Fair, the 1915-1916 Panama-California Exposition. It’s easy to spend hours meandering around the artfully designed buildings and beautiful gardens present on the 1,200 acre campus. Plan to spend a whole day exploring every corner of the San Diego Zoo, which is renowned for its panda exhibit. A free tour bus circumnavigates the majority of the zoo, but we found that the zoo was best experienced by foot. Then, plan another day to walk around Balboa Park’s many gardens and museums. We enjoyed the Museum of Man, a museum of anthropology that contains excellent special exhibits (including one on the history of torture). If you plan to pop in to several of the museums or special gardens, consider purchasing a San Diego Go Card. The pass gives you discounted access to all the museums, the San Diego Zoo, SeaWorld, and even local amusement parks. If you’re set on visiting all the tourist attractions within a few days, this Go Card is the best way to get the most bang for your buck. 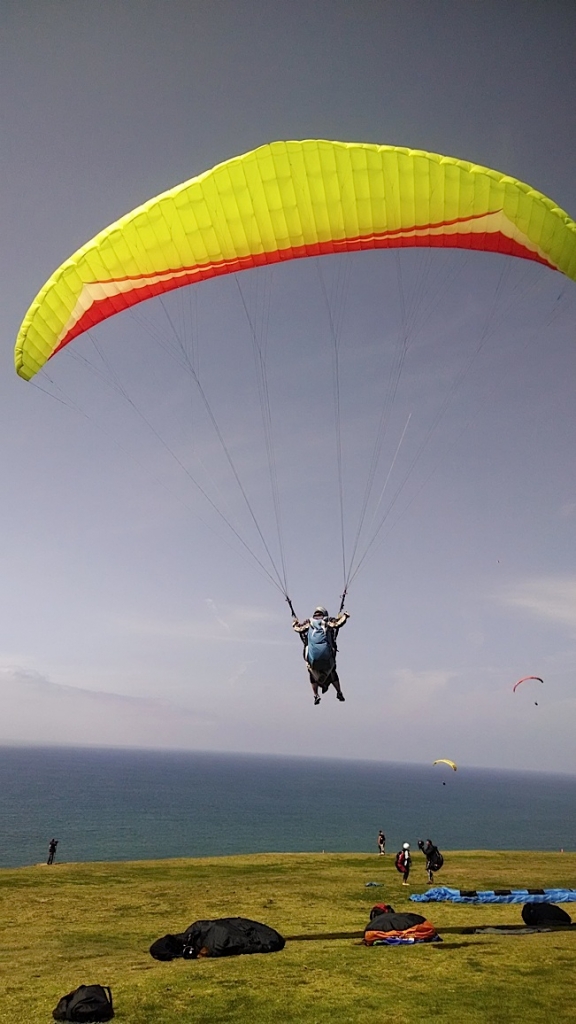 Kathleen lands after her flight at Torrey Pines Gliderport. Photo by Krissy Bradbury

In our opinion, the most worthwhile venture you can make is to head north to Torrey Pines. First, stop at the Torrey Pines Gliderport and splurge on paragliding sessions that take you sky high over the million-dollar homes on the coastal cliffs. Even scaredy-cats (like me) can enjoy catching the wind with a certified instructor on a tandem para-glide. If you want to amp up your ride, ask your instructor to show you some crazy stunts! For the faint of heart, take a moment to grab a delicious sandwich at the Cliff Hanger Café and watch adventurous para-gliders and hang-gliders in flight. 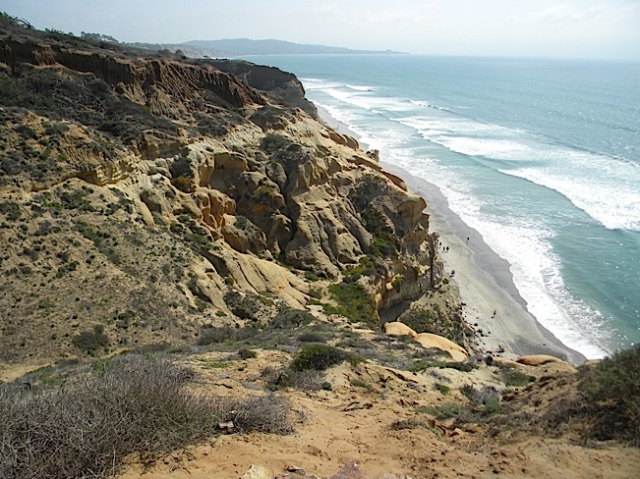 Below the Gliderport is Black’s Beach, San Diego’s only official and legal nude beach. Though it’s a steep hike down to the waterfront, Black’s Beach boasts the best waves for surfing and for letting it all hang loose. If you’re lucky, you can make a congenial nudie friend who can tip you off to other nude spas and bathhouses in the area. After scaling back up the cliffs, drive up the coast toward Torrey Pines State Reserve, a park with easy trails through the ocean-side cliffs. We plotted our course to end up descending onto the beach and spent the rest of the afternoon wave-jumping in the clear Pacific waters.

There are beaches aplenty on the California coast, but we particularly liked La Jolla Beach due to the natural wildlife and ecosystems. Take advantage of one of La Jolla Kayak’s guided kayak tours, and learn about the history of the area. Dolphins and leopard sharks accompanied us on our kayak down the coastline as sea lions basked in the sun on the cliffs above. If the tide is low, your guide may be able to escort you into caves that once connected to historic speakeasies. We found the trip to be less strenuous than we expected, but riding the waves back to shore thrilled our adventurous spirits. 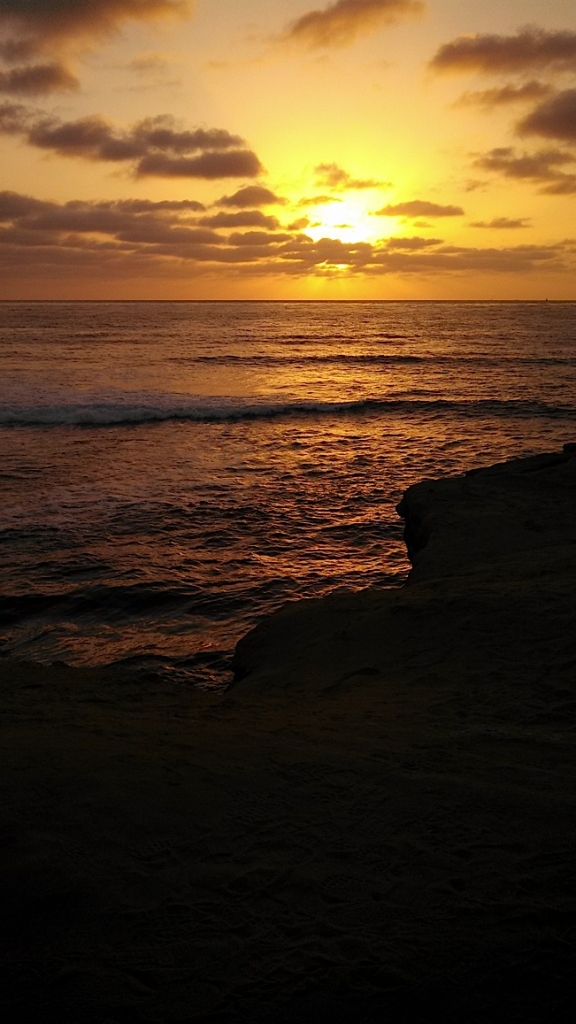 The Perfect Ending to a Perfect Day

Plan to watch the sun set over the ocean from multiple locations throughout your trip. Drive across the bay to Coronado Island, where you can watch the sun slip behind the ocean next to the famous Hotel Del Coranado. The beach below the hotel is a popular place for surprise proposals, wedding ceremonies, and lovers of all ages to walk hand in hand along the ocean. Don’t miss the sunset at Sunset Cliffs, either. The rocky and slightly dangerous terrain does nothing to prevent romance seekers from viewing the sun as it melts into the sea. Since each sunset is unique, plan to take along a camera to capture the beautifully painted sky. 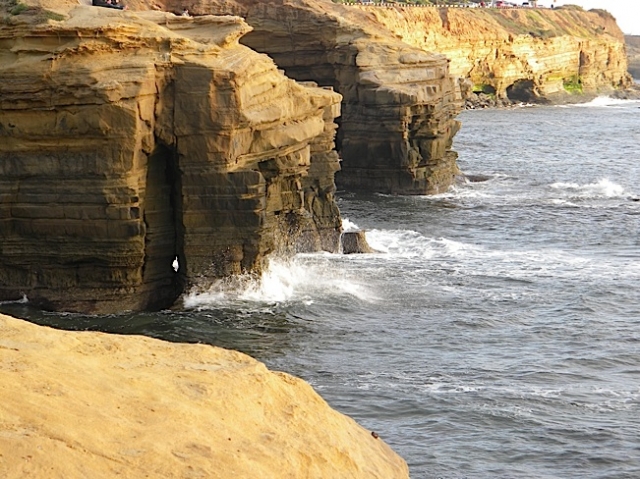 Cliffs along the California coastline. Photo by Krissy Bradbury

Though we gravitated toward the more adventurous outdoor activities, San Diego is the ideal vacation location for any sort of traveler. Whether you’re looking for some prime retail therapy, an immersion into history and art, or a break from reality on the ocean shore, you’ll find what you’re looking for (and more) in San Diego.

For more information about San Diego or to start planning your trip to paradise, visit www.sandiego.org 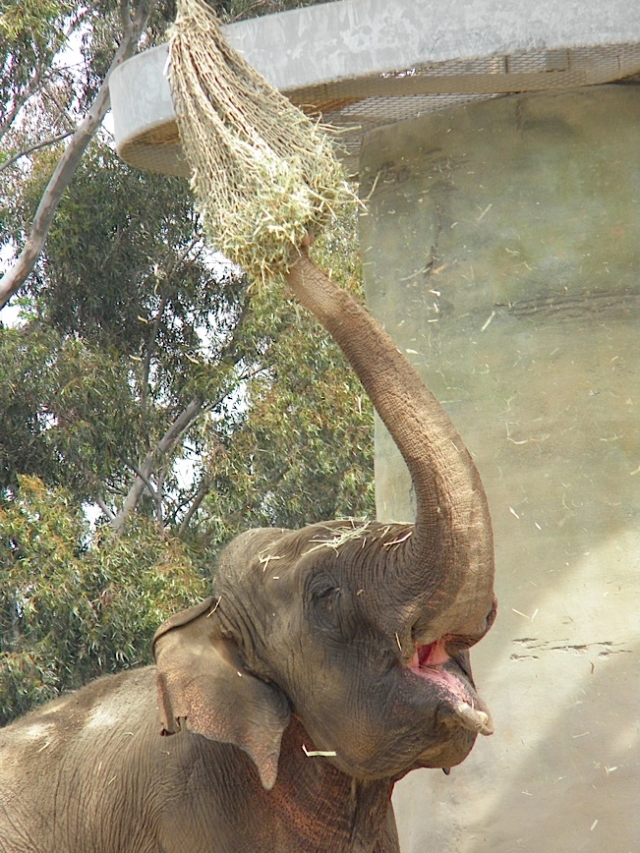 An elephant plays with its food at the San Diego Zoo. Photo by Krissy Bradbury