Forget the calendar’s promise of spring. We in Minnesota don’t fall for that illusion. If we’re smart, we’re off to San Antonio. The message “Remember the Alamo” takes on new meaning when it’s 75 degrees at the site and still muddy in Minnesota. The sky behind the city’s icon is an impossible shade of blue, so trade your boots for sandals, and hit the road! 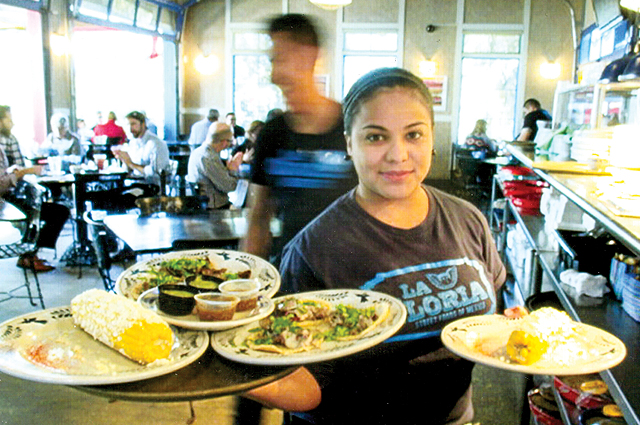 San Antonio’s laid-back vibe is more Mexican than King Ranch, starting with its trademark River Walk, extending 13 miles (with more to come) — the lifeline of the city. The rio slithers between balmy promenades sheltered by palms and cypresses, roses and ivy tumbling over waterfalls, mosaics and fanciful bridges — a pastoral meander girdling the downtown loop’s livelier color guard of bars (margaritas to go), bistros, and retail. Jump off at Houston Street and into a slice of Texas history, starting, as it all did, at The Alamo.

The white limestone church-cum-fort of 1724 is best remembered for the battle of 1836, when Texans, outnumbered ten to one by the Mexican troops of General Santa Anna, were defeated and slain. Tour (it’s free) the tiny church-fort and barracks to view hallowed battle icons like the wallet and firearm of David Crockett, killed here after the brave 13-day siege, and Santa Anna’s sword.

Follow Houston Street to San Fernando Cathedral (the oldest in Texas) where the remains of Crockett, Jim Bowie, and James Travis are honored. Linger for a free sound-and-light show (Tues., Thurs-Sat. evenings) tracing Texas history through artful projections on the cathedral’s facade, amid a viewers’ chorus of “Ooooh!”

Just behind the cathedral sits the Spanish Governor’s Palace, a fancy name for the eight-room adobe structure of 1722, when the land belonged to Spain. The hand-carved doors, detailing the conquistadors’ story, open onto “the most beautiful building in San Antonio,” according to the National Geographic Society. 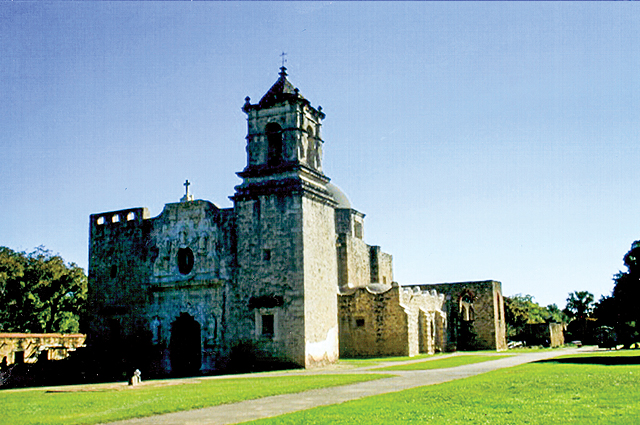 And just behind it, follow the strains of mariachi music to Market Square, the Mexican Mercado, launched in 1820 by the Chili Queens selling their specialty. Today it extends for three riotous blocks of color, brightening a hundred-plus shops selling crafts, folk art, piñatas, and pottery, and cafés like legendary Mi Tierra, since 1943 serving Tex-Mex icons 24/7 and 365 days.

Sated with tamales, retrace your steps to the River Walk, which meanders close to the amazing Central Library, an eye-stopper in Enchilada Red stucco, housing, among the books, artworks such as the famous waving tendrils of a Chihuly glass sculpture. Across the street, the Southwest School of Art occupies the former Ursuline Academy, established in 1851 as the first school for girls in the city. The priest’s house now is home to 50 looms, part of the weaving program; another building holds the ceramics studio, and the once-dormitory contains a small History Center. After a furtive glance, its docent whispered to me: “As long as we’re here alone, I can say this: these nuns were feminists!”

Head south along the San Antonio River (drive or rent a bike) to explore the historic Mission Trail, recently designated a UNESCO World Heritage Site. Starting with The Alamo, Franciscan friars built missions a day’s journey apart, aimed at converting the hunting-gathering Native Americans to Catholicism and farming life. It’s smart to start with Mission San Jose, “the Queen of the Missions,” which boasts a visitors center with a film introduction and free tours by the park rangers who run these sites.

We eavesdropped on Ranger Tom Castanos, educating grade-schoolers in indigenous ways. (“What did they wear? Well, go into your room, shut the door, and take off your clothes. Now you’re like them, wearing nothing.” Kids: “Eeeewww!”) Tom trains them in throwing the javelin-like atlatl to hunt for dinner. We, meanwhile, admired the turmoil of sculpture surrounding the church’s entrance: cherubs, crosses, and saints who told a story to those who couldn’t read. The rose window is highly treasured, too. Continue to the others, such as Mission San Juan Capistrano, a blinding-white facade clasping a sweet, wood-beamed chapel with gleaming gilt altar. 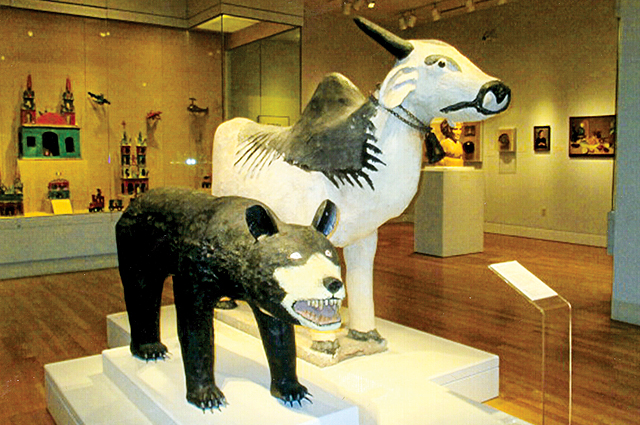 Pursue history along the northern slice of the River Walk at the Witte Museum, whose focus is “unapologetically South Texas history,” declared a docent as we ogled its collection of spurs, branding irons, and a climb-on saddle (selfie alert). Interactive exhibits trace “what it was like to settle South Texas” via the “voices” of a hotel maid or German miller. A pinball machine challenges you to “ride” the range, avoiding hazards ranging from hailstorms to stampeding cattle. Exhibits include a formidable longhorn and a portable jail and photos of those early Chili Queens, too.

The San Antonio Museum of Art, also on the River Walk, captures beauty worldwide, from Egyptian mummies, Indian Buddhas, and Roman emperors to contemporary paintings. But the don’t-miss highlight is the Nelson Rockefeller collection of Latin American art this patron rescued and donated: mesmerizing works from the Mayans of 800 B.C. to a 1996 Brazilian print titled “St. Peter Receiving a Prostitute into Heaven.” Works range from Diego Rivera’s paintings to a life-size cement bull.

Nearby, The Pearl district represents a much more recent save: the rehab of an abandoned industrial area into the hippest enclave in the city, anchored by the repurposed Pearl Brewery debuting as the glam Hotel Emma. Mammoth brewing tanks marshal the happening bar, abetted by an in-house library, open-air swimming pool, and a swell café called Supper. It’s helmed by Chef John Brand, a Midwest transplant who lives by the credo of “simple food, done well. Quality rather than ‘hero’ dishes,” he explains, devoting half his menu to veggies. “Vegetables are the new meat,” John declares, demonstrating with a lemon-dill risotto; Honeycrisp apple-parsnip soup; salt-and-vinegar Brussels sprouts and, oh yes, smoked quail, venison loin, and roast chicken. His breakfast bonanza includes chorizo Scotch egg with green chili cornbread, and spiced waffle loaded with duck confit. 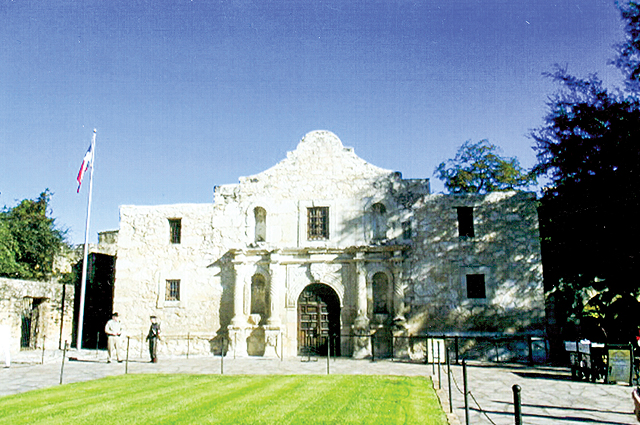 The Alamo, in downtown San Antonio

What gives, with all this primo kitchen talent? Well, blame it on the CIA. The Culinary Institute of America was lured to launch a branch of its famed chefs’ school in The Pearl, highlighting Latin American cuisine. Its student-run restaurant, Nao, tweaks classics from Peruvian ceviche to Cuban sandwiches and Mexican flan, with possibly the best guac on the planet. There’s also a weekend farmers market on the plaza, hemmed with dozens of retail boutiques (books to boots to bikes).

ENDNOTE: Where the Boys Are

Magazine: Out in San Antonio