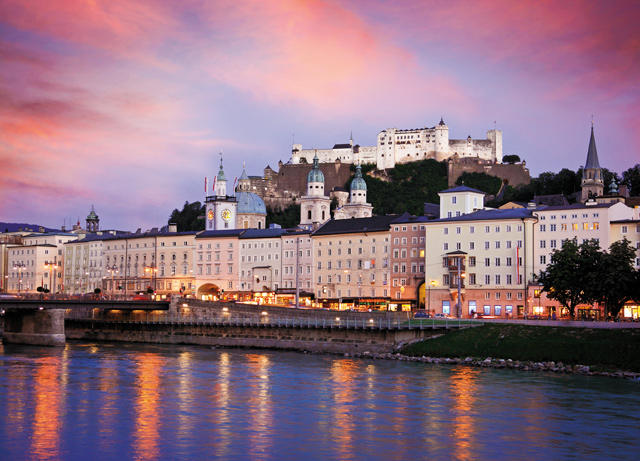 The hills are alive, all right—a mighty fortress rising here, a somber monastery anchoring another peak, and, yes, everywhere, the sound of music .  It’s Salzburg, and I’m infatuated with—no, not Maria. Mozart!—  the city’s favorite, and most famous, son.

It’s Easter Week, where Mozart Mania hits a high note. Sunday morning, his “Missa Solemnis” rings out from a patriarchal church. (And, during Holy Week, Haydn’s “Last Words of Christ” fills another, with Bruckner’s own Mass under another steeple. And more. And all are free.) Plus, at the famed Marionette Theater, which performs in an intimate Baroque chamber as glorious as the music, I’m watching clever puppets enact Mozart’s “Magic Flute.”

Here’s the Cathedral, fancifully refurbished in 1628, where Mozart was baptized and later played the organ, dominating one of the spacious plazas that link the compact Old Town. Here, too, his birth house, where you’ll find the infant’s  violin—along with a lock of hair, pearl buttons, tobacco case, and his portrait on every souvenir known to marketing genius, from chocolates to golf balls, playing cards and pack of Kleenex (plus CDs, of course). And across the river, in the New Town—where the pretty Mirabell Hotel in which I’m staying began life as a palace in 1653—there’s his later residence with his piano along with scads of portraits and explanations to separate the true version of that six-year-old in powdered wigs from the many fakes. There’s ornate Café Tomaselli of 1708, with fancy coffees served by waiters in formal dress, where Mozart enjoyed eine kleine braune long before me. 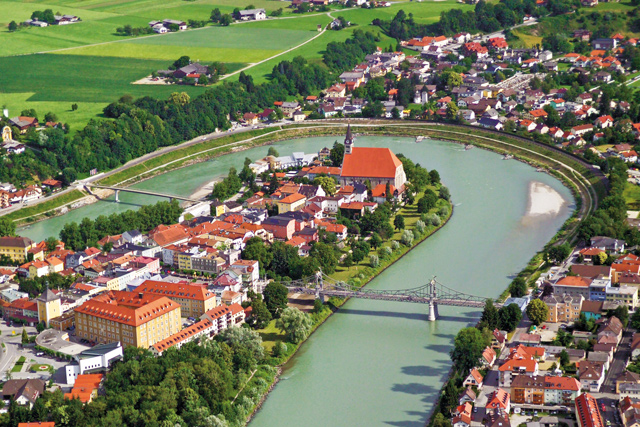 But long before Mozart came the Romans. You can spot remains under the Panorama Museum, which flaunts a 360-degree painted view of the town, circa 1828, unchanged today. (Yes, that’s Maria’s convent in the distance.) The picturesque-beyond-belief cobbled shopping street, Getreidegasse, once the Roman road, today  is densely packed with 15th-century facades flaunting iron signs depicting the trade practiced within—a venerable apothecary, a goldsmith, a—what?—a McDonald’s.  Called the Rome of the North, Salzburg was named for its claim to fame and riches, salz: salt, aka “white gold.” The man who used his salt-mine fortunes to transform it from a muddled medieval backwater to its inviting presence was Archbishop Wolf Dieter. In the 1600s, he bought, then tore down, blocks of houses to create the open, social plazas that link the town today. (He also built the ornate Mirabell Palace—now a concert site—and its vast public gardens for his mistress and many kids.)

I’m staring at his portrait—keen eyes, cultivated moustache—in the Salzburg Museum, which depicts the city’s history, topped by an exhibit called Ars Sacra:  glorious religious art (the only kind, back in the day) with medieval, dark-eyed Christs balancing golden dinner-plate halos, Virgins in fancy dress, and altarpieces from many a surrounding church. Excellent handiwork of today’s craftsmen—dirndls to edibles, ceramics to carvings— is found at Heimatwerk, housed below.  Here, close to the glockenspiel which frequently chimes its 17th-century bells, stands Mozart’s statue, strewn with flowers from present-day fans. 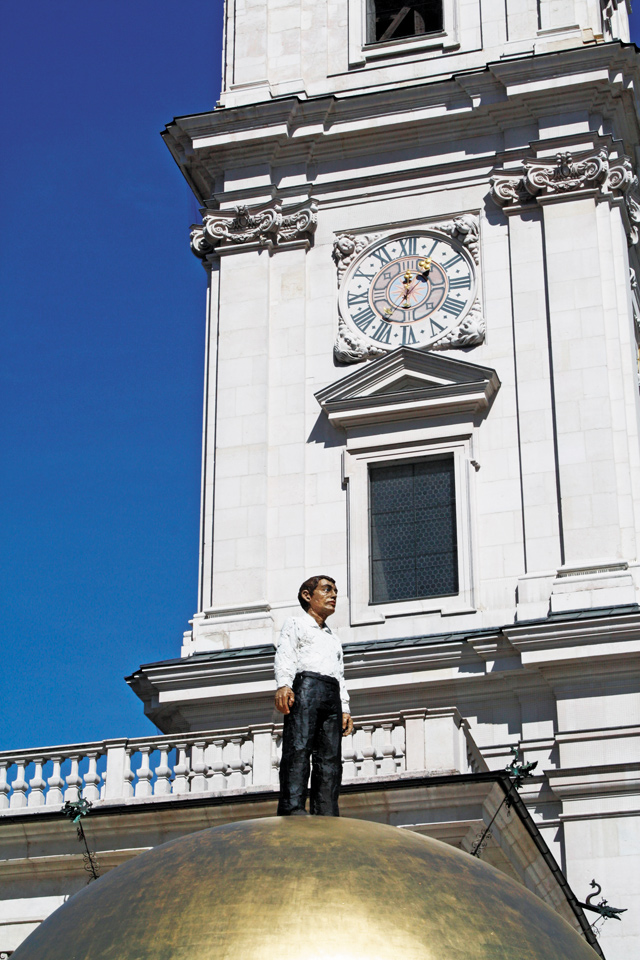 In the square behind the Cathedral, with giant chessboard and golden orb topped by a life-size sculpted man gazing into those “alive” hills, a narrow lane—past the antique water wheel and the best bakery in town—leads to St. Peter’s Cemetery, a pocket of well-tended gardens and ornate memorials. Then step in to St. Peter itself, whose Romanesque interior has been gilded with Rococo luster. You’re now close to the Festival Hall, Salzburg’s famous summer music scene.

And close, indeed, to good eats. The Music Festival’s glitterati head to Triangle, where owner Franzi will seat you amidst his clutch of cozy wooden tables to feast on regional fare, including his signature fish soup, lush with salmon and fennel in tomato broth, then wiener schnitzel with warm, sweet-sour potato salad (or choose goulash with bread dumpling, or local trout). And for dessert, puffy pancakes loaded with blueberries, sided with ice cream.

Aside St. Peter’s Church, seek out Stiftskeller St. Peter, the oldest restaurant in town—and, they say, in all of Europe. Charlemagne ate here in 803, but today, its bright, intimate rooms serve dishes the mighty monarch might not recognize: yummy, nouvelle-inspired fare like seabass carpaccio with salted artichoke and chervil ice cream, followed by pork tenderloin plated with gnocchi in a caraway-bacon glaze, then profiteroles garnished with orange-mint salad and mandarin ice cream. A glass of Gruner Veltliner, Austria’s poster wine, gilds the lily. 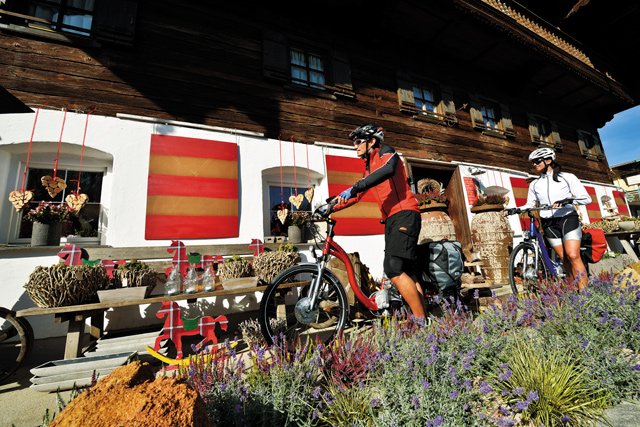 At K+K, as contemporary within as it is antique without, you’ll spot the town’s movers and shakers (yes, the mayor) lunching on lamb in all its guises. My luscious chops with bacon rosti followed a starter of sheep’s cheese on lamb’s lettuce in pumpkinseed oil, the local specialty. Then jump back a few hundred years, across the river, to Zum fidelen Affen—the Merry Monkey—housed in a building from 1417, serving vast portions of food almost as venerable: tafelspits (boiled beef) with roast potatoes and spinach. Goulash. Schnitzel. I started with a light pumpkin-orange soup and finished with schateinharfen, a dessert that takes longer to pronounce than devour: apples and almonds baked with bits of pancake.

Easter Week salutes the lusty outdoor market, held on Green Thursday across from Mirabell Palace, and worth an early wake-up call to meander amidst the hundreds of bustling stalls selling Easter lamb, Easter breads, and everything else edible, from sausage to cheese, from fruit to schnapps, along with flowers galore—even butter, sculpted into lambs, and eggs: dyed in myriad colors or painted in intricate designs. Chocolate? Of course! Also crafts, like tiny bunnies made of twigs and chicks in nests. “Gruss Gott,” everyone greets me, followed by “Auf Wiedersehen”—it’s that friendly.

Easter Markets fill the countryside, too. Tiny Hennsdorf boasts food trucks vending cheese, sausage, flowers, spices, fresh baked goods and more. There’s also an Easter Market of crafts at Gut Aiderbichel, a countryside estate founded as a “retirement home” for old, sick or abused animals, open to tour, and pet. Donkeys wander beside us, and senior cows waddle by. The horses are majestic, while the monkeys, formerly used for experiments, won praise from Jane Goodell. Farther on, amidst shining mountain lakes, tour Trumer Brewery at Obertrum , then enjoy its lager while lunching on local trout under the staring gaze of stags’ heads in old-time Brauagasthof Sigl, dripping with gemutlichkeit.

It’s supposed to be spring. But it keeps snowing. Back in Salzburg, sculpted horses rising from the fountain wear icicle beards. Yet the welcome couldn’t be warmer. To plan your trip, visit www.salzburg.info. 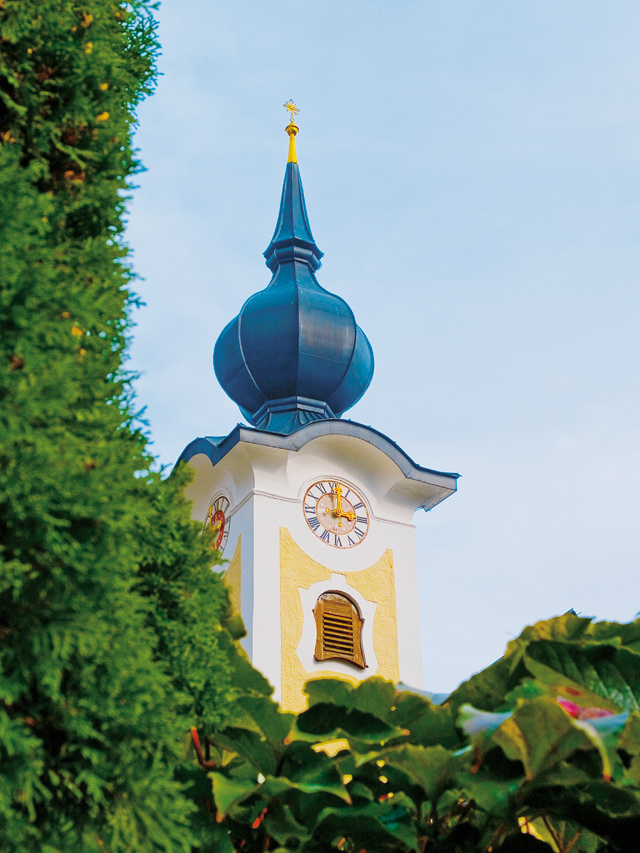 In Mirabell Park: Steps near the Pegasus statue lead to a small mound, the rendezvous point for the town’s gay community. This very open and integrated city welcomes GLBT visitors everywhere.