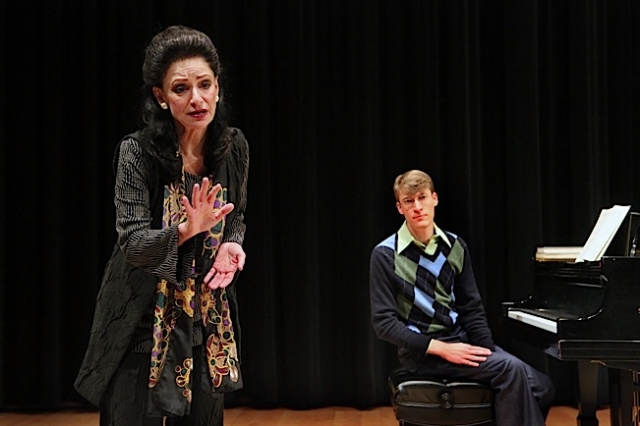 Sally Wingert soars again! This time in a bravura performance as Maria Callas in Terrence McNally’s Master Class. MacPhail Center for Music’s Antonello Hall, a space for recitals, suits the play’s setting of a seminars the opera icon taught at the Juilliard School in 1972. Peter Rothstein has directed this play with music for Theater Latte Da.

Three students, Callas teasingly refers to as “victims’, sing in front of her with hopes of getting extraordinary advice. Indeed, what she says is extraordinary but not exactly what they expect or want to hear. This was a woman who survived the Axis occupation of Greece, the cruelty of Aristotle Onassis, and the ferociously competitive opera world. She was not one for compliments.

Wingert reveals a difficult yet admirable woman whose opinionated views and attitudes rub against the grain of the students, the stagehand character, and much of the audience. Wingert is inspiring, powerful, at times delicate, and soulfully memorable. It’s as if she is actually channeling the artistic genius of Callas. 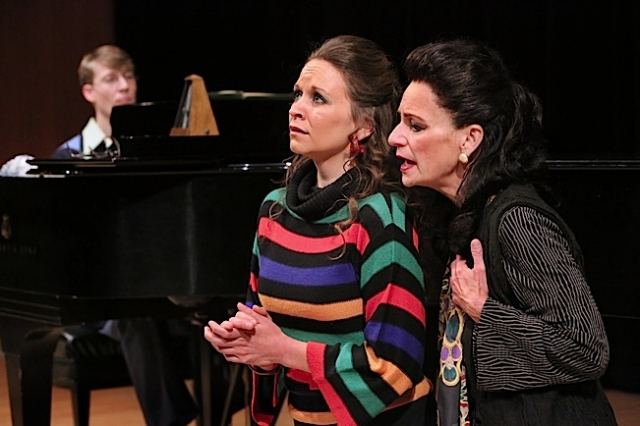 Andrew Bourgoin is superb as Manny, the piano accompanist. Kira Lace Hawkins, Kelsey Stark D’Emilio, and Benjamin Dutcher are terrific as the opera students. Paul Von Stoetzel is perfectly studly as the stagehand character who Callas simultaneously admires and insults.

For those who saw Faye Dunaway perform McNally’s Callas at the State Theatre in the 1990s, know that Wingert is on a par with the Great Dunaway.