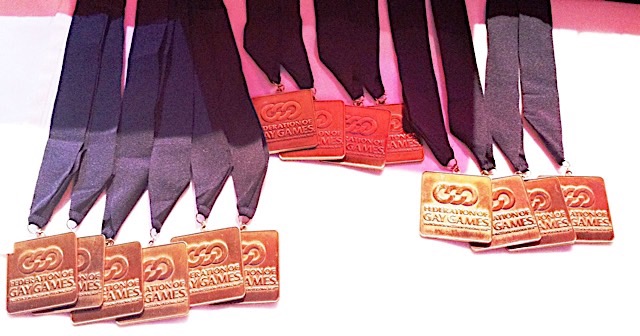 Photo courtesy of the Federation of Gay Games

Just as a rose begins, really begins its existence below ground and out of sight, the Olympics-esque, international, multi-sport and cultural event known as the Gay Games began, really began, in Mexico City on October 12, 1968.

That was when Tom Waddell, a proud member of the US Olympic Decathlon Team, paraded into Estadio Olimpico Universitario as part of the Opening Ceremony for the Games of the XIX Olympiad.  Here he was bathed in wave after exhilarating wave of friendly, rolling thunder, the unfettered cheers of gleeful thousands.  The future Gay Games godfather was so overcome with emotion that he wished everyone, not just elite athletes, could participate in such a moment.

Tom Waddell had more than earned that participation.  Eight years earlier, Waddell had tried out for the same US Olympic Decathlon Team but failed to make the cut.  In response, he decided to make cuts of his own, focusing his Ahab-approved personal drive on becoming a doctor in 1965, as most frustrated would-be Olympians do.

But the dream of jockstrapped glory had taken root, and Doctor Waddell kept decathlon training, even after being drafted into the U.S. Army the following year and landing in Washington, DC, as part of an international medical program.

Finally, despite all the obstacles entities with “U.S.” in their names had thrown at him, Tom Waddell–professional soldier, professional healer, and closeted gay man–was included as a member of the US Olympic Decathlon Team at the unlikely age of almost-thirty-one.  Within the Mexican arena in 1968, Waddell took full advantage of his moment, setting five personal best records during his decathloning.

Participation.  Inclusion.  Personal Best.  Gleaned from his experience as an Olympian, Tom Waddell would turn these values into the unwavering roots of the Gay Games…but the Gay Games themselves would, like seeds sown in dry soil, have to wait a while before they could flourish.

As if it were a baton in a relay race, Waddell for over a decade carried the idea of a sports-and-culture event put on by the LGBTQ community and open to everyone.  The old seed finally sprouted when Waddell, having outed himself within the pages of People Magazine, delivered an acceptance speech upon being named the Outstanding Male Athlete at the annual San Francisco Cable Car Awards in 1981.

“Wouldn’t it be great,” Waddell supposed, “if San Francisco hosted a Gay Olympics and invited the rest of the world?”  The cheers he received, perhaps reminding him of the electrifying reception that inspired him in Mexico City, obligated him, at least in his own mind, to make his conjecture real.

VISION CATCHES UP TO VISIONARY

Months and months of rigorous fundraising and frantic deal-making followed, along with no small amount of adjustment:  just weeks before the event was set to take place, the US Olympic Committee won a lawsuit preventing Waddell, and the dozens of friends abetting him, from using the O-word in the name of their event…a perfect reflection of the fog-like discrimination faced by all things Gay in those foggy, un-gay days.

Despite all the difficulties, a torch that had begun its cross-country chaperonage in New York City, home of the Stonewall Riots, arrived at San Francisco’s Kezar Stadium on August 28, 1982, where it was greeted by Tina Turner, who highlighted the opening ceremony which was witnessed by thousands of supporters and over 1,300 athletes from 170 cities.

While continuing with traditional Olympic-inspired sports, the Gay Games will in their eleventh iteration extend the 40-year-old tradition of including a competition that’s especially valued by the current host city.  Toward that end, the Hong Kong-based next Gay Games will feature duanwu jie, or dragon boat racing, a Chinese tradition that’s thousands of years old. If Minneapolis’s Aquatennial milk carton boat races were run by serpent-themed vehicles that sank only after crossing the finishing line, if at all, that would be duanwu jie.

As a seeming nod to athletes whose war cry is “Not in the face, please, God, anywhere but the face,” dodgeball has been added to the list of events.  Another modern Gay Games amendment is e-sports, which look an awful lot like competitive video gaming because they are competitive video gaming…meaning that thousands of elderly mother’s basements will lie dormant as Gee-Gee-One-One is contested.

Possibly as an unconscious nod to Tom Waddell’s medical career, Gay Games 11 has been postponed for a year, meaning that it will take place in November of 2023…and some of the competitions have even been moved to Guadalajara, Mexico.  Explains the Gay Games 11 Hong Kong organizing team in a recent press release, “The decision has been made primarily due to the unpredictable progression of COVID variants and the corresponding travel restrictions that continue to make it challenging for participants from around the world to make plans to travel to Hong Kong.”   The bad news is obvious, of course, but the good news is that e-sports competitors will benefit from another year of tortilla chip devouring, or, as they call it, “training.”

Wherever, whenever the Gay Games are played, this year’s fortieth anniversary of their birth presents the opportunity admire this unlikely rose’s pooling pedals as they affirm an existence that started off uncertain but has since, thanks to its intractable roots of planted by their progenitors, become perennial.

“Participation, Inclusion, and Personal Best” is ™ Federation of Gay Games.