Rothstein’s Magnificent “Gypsy” Mines the Myth of the American Dream 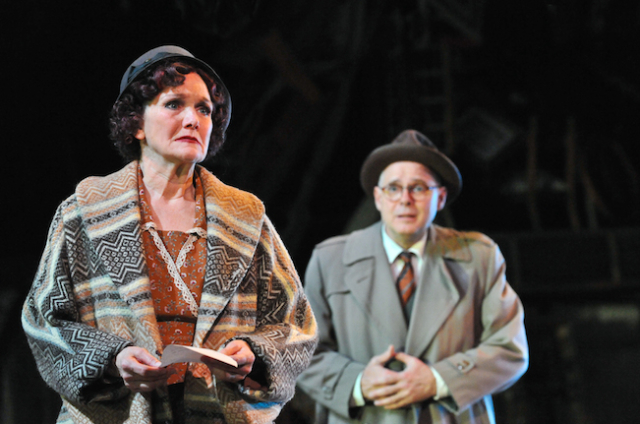 Musicals filled with great songs are often sure bets if the voices and orchestra are simply capable. But what is the difference between a capable and enjoyable musical and a truly powerful musical? Director Peter Rothstein provides a clear answer with his current Broadway Re-Imagined staging of Gypsy at the Pantages. This co-production of Rothstein’s Theater Latté Da and the Hennepin Theatre Trust is not merely a good show with innately great tunes well done. It’s much more than that.

Rothstein taps into the deeper ideas, feelings and themes that the musical’s book writer, the great gay theater icon Arthur Laurents, lyricist Stephen Sondheim, and composer Jule Styne tapped into. In 1959, the nation was ripe for change and the white picket fence compulsions of the decade were wearing thin. Identity was based on your material acquisitions and how well thought of you were within whatever walk of life you walked. And how your kids ranked in their peer group and at school. A person was judged by what he or she owned and how prestigious they were or seemingly on their way of being. Obviously, this could be emotionally exhausting and over time, from what we now know as the perils of stress, physically destructive. Gypsy seems prophetic in its observation of how following a delusion, which we may choose to call a “dream,” can turn on you.

Gypsy is actually not the musical’s main character. Mama Rose, the mother of the future burlesque legend, Gypsy Rose Lee, is the protagonist. As a mother of young daughters, in the early parts of the musical, she reveals she vicariously lives through her girls. She drives them to perform cute little song and dance numbers and constantly auditioning and traveling the vaudeville circuit. Trouble is that it’s the 1920s and vaudeville is dying out, something Mama Rose cannot accept. This production has a visceral sense of the vaudeville era coming to its sad ending.

Some may think the show is an indictment of stage mothers, but what its creators and Rothstein understand, is that Gypsy is about the domineeringly dark side of human power misapplied. Particularly in our land of the free and home of the brave. Anyone who has dealt with an authoritarian figure in their life, regardless of gender, especially if it’s someone they loved, can relate to the daughters’ plight. Being forced to be something we are not in service of a fixed social standard or ideal. We have all heard the term love/hate relationship, a term that in the years after Gypsy first opened came into common parlance. 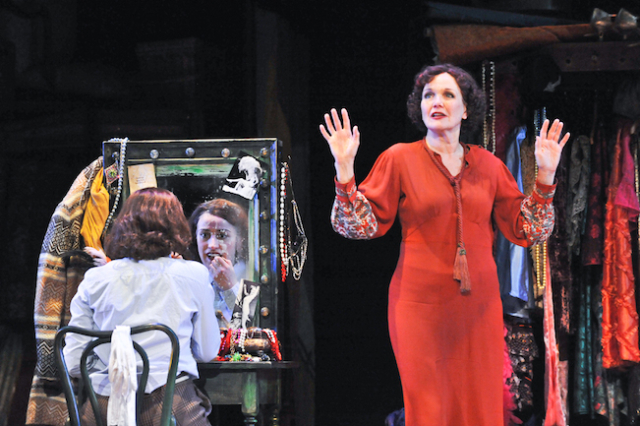 Of course, Rothstein’s whole cast is glorious, with Michelle Barber resplendently maddening as Mama Rose. Her “Everything’s Coming Up Roses” is absolutely soaring. Barber’s own daughter, Cat Brindisi, is luminous as Gypsy. What’s tricky about this musical, especially in the second half, are the almost mystical transitions that occur not so much between scenes, but between moments. This is something not always accomplished in productions of Gypsy, even Latté Da’s own, 10 years ago at Loring Playhouse. But here the spell is binding. Matthew Michael Ferrell’s choreography blends with those delicate turns beautifully.

Latté Da veteran Tod Petersen as Herbie, the man who stands by Rose despite all her volatility, is in top form. This could be a throwaway role, swallowed up by Rose’s caustic vibration. But Peterson exacts the perfect level of tension to make the friction and love between the pair palpable.

Shinah Bradshears as daughter June (imagine Shirley Temple meets Sandra Dee) and Brindisi capture the daughters’ suffocating frustration. Their rendition of “If Momma Was Married” is joyously thrilling. You may want to get up and dance. Eriq Nelson delights in multiple roles and crosses the gender gap.

Michael Hoover’s set, Alice Fredrickson’s costumes, and Mary Shabatura’s lighting conjure a sublimely haunting sense of a vaudevillian era that seems to lurk in the very nooks and crannies of an old theater. Denise Prosek’s music direction emanates that spirit to sumptuous effect. Musicians and singers transport us to a place of bittersweet nostalgia. But it’s not an easy nostalgia. Oh, how we yearn for that simple past we thought we once had. But what if that dreamy American past was more emotionally brutal than we then realized? Looking back on it, perhaps we may have gained a bittersweet wisdom.