Roller Derby, Save My Soul 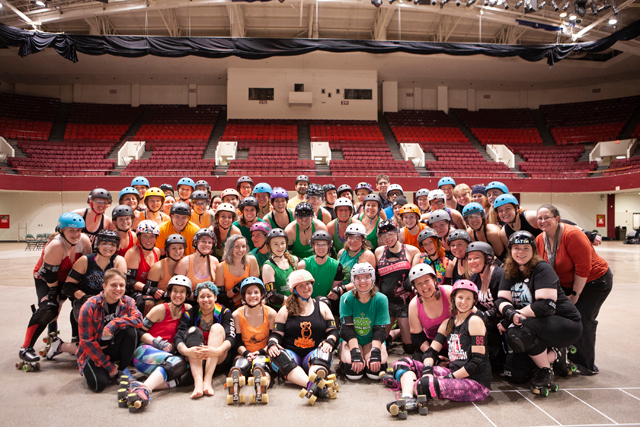 Originally founded in 2004 by the Donnelly sisters as the Minnesota RollerGirls, the increasingly popular roller derby team has since renamed itself Minnesota Roller Derby to be more inclusive.

“It really comes down to the fact that all people want to be respected and have a caring and welcoming community in which to thrive, so [rebranding] was a way for us to use our very brand to reinforce our core values of diversity and inclusivity,” says Val Kyrie, or VK for short, who is a jammer, pivot, and blocker for the Dagger Dolls home team. “We want all of those that skate with us to feel that they belong here under our common banner.”

The Minnesota Roller Derby league embraces and encourages members of the GLBT community to participate in the sport. VK says they have many skaters of various sexualities and gender identities, including herself.

“As a gay woman, I personally feel that this is not only a safe space but a space in which we can affect change that spreads out into the greater world,” VK says. “We are a very protective community and have each other’s backs no matter how any of us identify, and we embrace our volunteers and fans in the same way.”

For VK, roller derby isn’t just a sport, it’s a way of life. She says it has given her an outlet for anger and other negative emotions while also providing a safe and welcoming community to call home.

“Roller derby is life. It has given me a community, provided me the opportunity to make amazing friends. It has given me an outlet to pour myself into during those tragic times in life when all you can feel is anger, it gave me the tools to save myself from depression,” she says. “Playing roller derby is the first time in my life I have ever felt like an athlete, and that is a strange and amazing feeling. Most of all, roller derby helped me discover who I am.”

Jammer, pivot, and blocker Gay of Reckoning agrees that the Minnesota Roller Derby has made a huge impact on their life, especially during the transition of moving from Madison, Wisconsin to Minneapolis in 2015.

“I first tried out roller derby when I was in college and my friend suggested that we try to join our local team, telling me that it was a badass, feminist, alternative culture,” Gay says. “When I got there, I learned that they were absolutely right, but that they had failed to mention that it was a sport and actually really difficult, so I ended up not having the time to pursue it seriously until I was out of college and living with friends in Madison.” 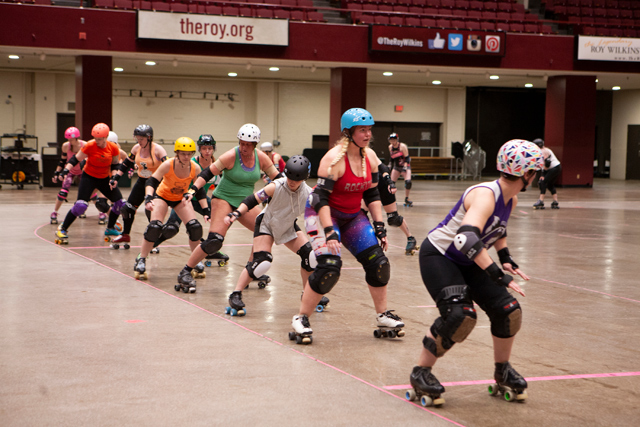 After moving to Minneapolis, they say it took them many years of training to begin to play the game, and many more to have any success with it.

“Minnesota Roller Derby is my favorite team in the world because we are fiercely competitive while remaining kind and welcoming,” they say. “Our team is ranked in the top 40 of over 400 international teams.”

Gay is coaching this season while recovering from ACL reconstruction, and they say it inspires them to come to practice and be met with thirty skaters ready to push themselves and learn and grow, no matter how difficult it is. Gay says they joined roller derby before they were openly non-binary, and the community accepted them for who they are, rather than who they appear to be. 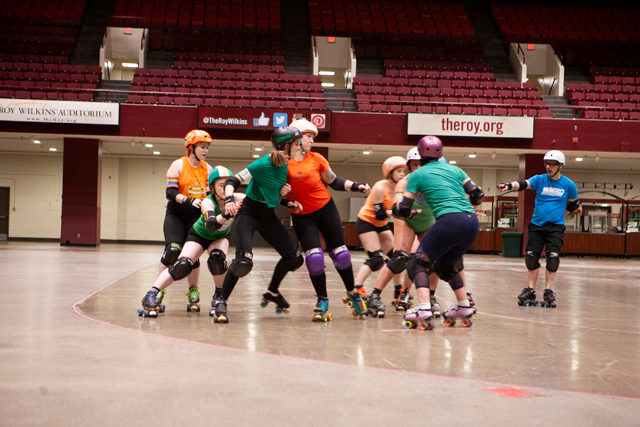 For Velvet Wench, jammer for Atomic Bombshells, skating has always come naturally. “I actually grew up skating at my hometown local rink but never imagined that it could be something more than a casual Saturday night socializing event,” she says. “My parents met roller skating, so having wheels on my feet feels very natural to me.”

Playing for Minnesota Roller Derby, though, isn’t your average lap around the rink, though. Velvet says the league is a family where everyone lifts each other up at practice and at home.

“For example, some of us wear our pronouns proudly on our uniform, and some of us hold our teammates’ hands when they come out to their family and friends,” she says. “For those interested in roller derby, I would tell you first there are many ways and combinations to be a part of this sport and league. First, you can come to events, show up, and meet the awesome people around you who also enjoy the sport.”

Velvet says they also welcome volunteers to help events run smoothly and sell merchandise, have a recreational league that meets Sundays during the fall and spring sessions, and has a team of officials both on and off skates who “are arguably more important than us skaters because they keep us from descending into chaos.”

Upcoming competitions include a home team championship on March 7, where two of the four home teams will compete for the Golden Skate, and the All-Star (travel team) season kickoff at home in the Roy Wilkins Auditorium against the Madison Dairyland Dolls on April 25.