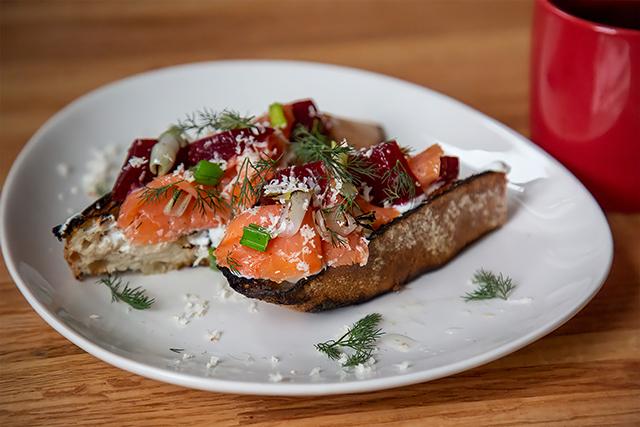 Not so crazy as it sounds. The culinary marriage grew from the chance meeting of co-owner Travis Wyncislak and partner/chef Adam Prince at a rock concert. (Thus, fulfilling another mutual passion, the café also sports a tiny stage for nightly live music). They discovered a shared admiration for the simple, sustainable and locally-sourced foods the two countries shared, while Adam, who had studied woodworking, noted their clean, pared-down aesthetic similarities as well. He’d picked up cheffing muscle at W.A. Frost to add clout to the endeavor.

Well, COVID-19, for one. It bumped into launch plans at the site they’d scored in the Rathskeller Building of the Schmidt Brewery complex on St. Paul’s West Seventh Street. But it gave time for Adam to build what may be the cities’ longest diner counter (16 seats) that divides a slim row of tables from the hustle of the kitchen. He also installed a primo sound system suitable for dance parties (provided the party-goers are pros at gyrating in close quarters).

So here we are, perched on our stools, ready to test the cross-cultural culinary marriage, beginning at the bar. My companion’s Shochu Blossom cocktail, starring Vikre juniper gin, proved a complex mix involving schochu, yuzo liquor, jasmine tea, egg white, citrus and sugar, which provided a politely sweet takeaway to the refreshing recipe. I went with a standard (more or less) Old Fashioned, garnished with a pine sprig. A robust list of sake and beer also is available.

Seven starters ($10-17) offer edible proof that interesting, engaging items are the love children of this union. A potato salad, dolled up with smoked salmon and preserved egg yolk among the usual suspects, sounded swell. So did the universal beet salad, here made special with a pistachio vinaigrette and preserved lemon.

We started our meal with what proved to be the most dreamy dish of the evening, a composition of local wild mushrooms with fresh figs (savory playing nicely with sweet) presented on a puddle of pureed sweet corn. I gladly could have summoned three more orders, licked each plate, and gone home happy.

However, continuing with an order of roasted carrots kept us in our seats. Roasting further sweetened the innately sweet vegetable, given a shimmer of miso and sprinkles of nori to further awaken its signature flavor, then jumped with a jolt of wasabi aioli as antidote. A shower of black sesame seeds supplied a savory fillip.

That left me humming. But along came our order of chicken steamed buns with their welcome jolt of sweet chili garlic sauce to bring my taste buds back to attention. A smoked soy aioli played against the sweetness, as did shreds of pickled cabbage.

Half a dozen entrees are listed ($12-18, plus a $24 pork tenderloin plate for the diner who craves a full-on, seriously sized entrée). We opted for the Scando smorrebrod. It’s straight out of Norway, with the exception of the bread foundation which, here—not there—is thick-sliced and then grilled. The fish proved lightly smoked so that its sweet yet briny flavor presided, along with a horseradish crema, dill—lots of dill!—and sea salt. The kitchen put its own spin on this simple and delicious classic with the addition of cubed beets and charred onion, which didn’t make nor break the deal.

Our second entrée, karaage (yeah, I had to look it up, too) delivered Japanese fried chicken, quickly deep-fried to retain its juiciness within its ultra-thin and lusciously crisp coating—a light, and sensational, envelope for the tasty meat. The plate arrived with a border sprinkle of preserved egg yolk, plus hints of cilantro to cleanse the palate—as did pickled green onion strands and the accompanying cabbage slaw. A whole new riff on fried chicken worth a foodie’s attention.

Two desserts ($5 and $7) are on offer. Both are served in espresso cups—just enough for a few bites to end the meal. A lingonberry mousse oversweetened the tart berries and proved cloying after two spoonfuls, while the kladdkaka—gooey chocolate cake leavened with tangy goat cheese whipped with maple syrup—hit the mark.

I’ll be back—if just to taste the pork dishes we couldn’t squeeze in (a starter of tree sap-braised pork belly plus that pork tenderloin main). And simply to see what these outliers come up with next. Well, what’s next is actually already yours to try: a brunch menu starring several Dutch Baby pancakes, sweet to savory, and more.