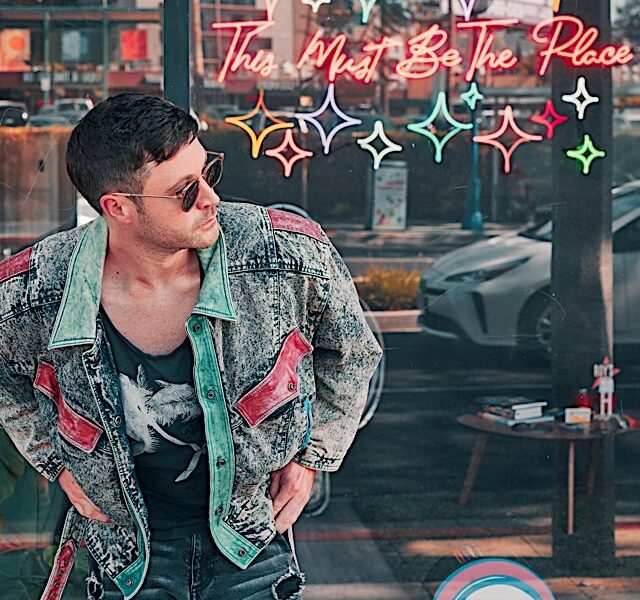 Photo courtesy of The Riker Brothers

“I was in the airport, standing in line, ready to board my flight home, and I just started openly weeping,” Brandon Stansell remembers.  “I think the people around me thought, ‘Oh, my God–who’s this freak that is just awkwardly crying as he’s boarding the plane?’”

The answer to that wholly reasonable question is simplicity on display:  the freak was Brandon Stansell himself, of course, rising country music star who, according to his own website, “has come to occupy a unique space in country music. He has been an ardent advocate for the queer community and the advancement of LGBTQ artists in the still widely conservative genre.”

As for the awkwardly crying part, well, that’s easy to explain, too:  it was the fault of Chely Wright–yeah, that Chely Wright, the Chely Wright, the pioneer who risked her down-from-the-mountain music career by coming out as lesbian in 2010, before anyone else, becoming fairy godmother of all things country queer in the glittery process.

It wasn’t a Chely Wright song that made Brandon Stansell go all rustic emo in the line at the airport, though—it was a Chely Wright text congratulating the son of Chattanooga on the video supporting his single “Hometown.”

“We shot this video, and Country Music Television decided to premiere it, and it was not the first time that a queer artist had something in that space, but it was the first time that a queer person could ever see a story like theirs in that space,” Stansell recounts.  “It was important to me and something I never thought that it would be me doing.”  In fact, the 2017 release of “Hometown” represented the first leg of a journey that would take Stansell further than any passenger jet ever could.

But, an electronic attaboy from Chely Wright notwithstanding, the ticket for the journey came at a steep price.  “That video was obviously a big step up for me, but it was a hard thing to make,” Stansell admits.  “It was a four or five minute version of my coming out story. So, it was a tough thing to make and a tough thing to write.”

As tough as it was, the composing wasn’t the toughest part. “Actually, I had written the song years before we actually ended up putting it out,” says Stansell.  “I had shelved it just because felt like no one would ever find themselves in it, and turns out I was very wrong.”

Many LGBTQ folk, old and young, suffering silently while living in the Bible Belt, had been given voice by Stansell’s work.  “I grew up in Tennessee and in the Southern Baptist church,” he recalls.  “These are the people that tell you that all sins are equal unless you’re gay. Then you’ve just hit the lottery.”

The voice Stansell supplied the silent minority was–naturally, literally–his own.  Remembering his gay adolescence in the American South, he says, “It was the thing I was most ashamed of, and to fast forward twenty years, and for me to be that person, to be not only out, but an advocate for people like me and a voice in this space where there weren’t people like me–that shocked a lot of people, but I think more than anyone, it shocked me.”

The journey continued, as Stansell kept making music within his country niche.  In 2021, he released an EP (or Extended Player), This Must Be Place.  That effort was eventually supplemented earlier this summer by six songs, which turned it into an LP (or Long Player, which is longer than the longer-sounding Extended Player).

Perhaps being open about his sexuality left Stansell open to broader musical influences on this latest project.  “I love country music, but I have a lot of other inspirations, too, that fall outside of the country world,” he notes.  “I’m a child of the Eighties. I had always been drawn to this kind of Eighties feel. These big synth sounds and melodies.”

Still, the walls of the genre kept Stansell’s creativity in check…for a while, anyway.  As he puts it, “I finally just threw my hands up and said, ‘You know what? I’m going to make the music I want to make, and it’s just going to be what it is. If it’s country enough for country radio or CMT, or the people in Nashville that absorb country music, great. If not, great. It’ll find the people it’s supposed to.’”

If This Must Be The Place is any indicator, LGBTQ Pride and creative pride have become one and the same for Stansell.  “I couldn’t be more proud of this thing, because it is the first time I felt like it’s exactly what I wanted it to be, and I wouldn’t change a thing about it,” the singer proclaims.  “I’m so proud of the way that it came out.”

A new album means a new tour, one that includes a new destination, a new this-must-be-the-place place.  “I’ve never played in Minneapolis before,” Stansell confesses.  “I was itching to get there.”  That geographic itch will be scratched on August 28, 2022, when Brandon Stansell’s journey wends its way into Mill City’s Lush Lounge and Theater.  “Everything is really small, purposefully,” Stansell says of all of the venues on his current tour.  “We wanted to keep it an acoustic, intimate feel.”