I’m in Louisville’s posh 21C Hotel, where the art is so avant, it makes our local Chambers look like a Norman Rockwell retrospective. Outside my room stands a four-foot-tall pink penguin.
Down the street, a glassblowing studio-cum-jazz club is in full swing. Across the road, an art gallery is showcasing performance-ready Derby hats. A few steps more, and the Humana Festival is in progress at Actors Theatre, drawing global critics for their first glimpse of next year’s hits. 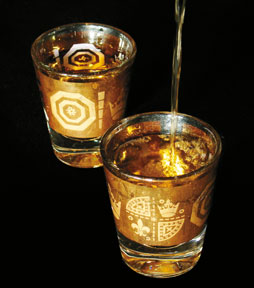 Keep Louisville Weird, a billboard urges, and clearly, everyone got the memo. What gives? Is it something in the water?

Yup, it’s the bourbon also in that glass. Well, that’s my theory, anyway. Nestled in the rolling bluegrass just beyond the city, seven distilleries of distinction irrigate creative juices with the liquor celebrated as America’s only native spirit. All offer free tours and tastings.

But for those sans time for the trek, Louisville recently launched the Urban Bourbon Trail. Six premier downtown bars/restaurants have linked to raise your spirits with theirs, via a “passport” that spells out the suggested method of tasting bourbon (wine geeks won’t need any intro). Collect all six passport stamps for a commemorative gift at the Visitors Center. 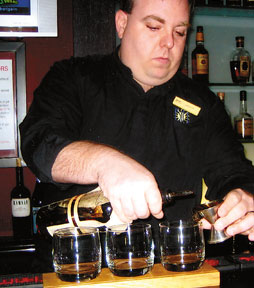 To be eligible for passport inclusion, an establishment must offer more than 50 bourbon labels (table stakes, actually—most boast 150-plus, including lots of small-batch boutiques whose bottles never leave the state). All offer flights of three half-ounce pours to compare and contrast styles, ingredients, and age. Many also incorporate bourbon in their kitchens’ recipes.

Some bourbon basics were gleaned on a tour of flat-out, gorgeous-beyond-belief Maker’s Mark Distillery, an hour out of town. Its signature crimson wax-topped bottle is almost as universally recognizable as Coca Cola (tastes a whole lot better, too).

First lesson: All bourbons are whiskey, but not all whiskeys are bourbon. By law, this unique spirit must contain 51 percent corn (most are closer to 75 percent, while others add wheat). It must be below 160 proof (read: 80 percent alcohol). It’s aged two years at the very least, with nothing added for flavor save the excellent limestone-filtered Kentucky water. And it must spend that time in a new, white oak barrel, given a quick char to lend that characteristic vanilla-caramel nose (plus that signature rich, caramel color). 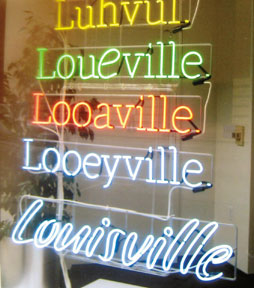 Visitors gather around fermentation vats of mash, as yeast releases carbon dioxide bubbles. Then, they head for the copper stills, where the rising alcoholic steam turns to liquid, before water is added to reduce the proof to 190. Next, it’s barreled and aged before the Master Distiller makes his blend, demanding consistency from year to year (that’s why he’s got the job, and not me). More water lightens the proof to 90, at which point it’s bottled, and, here at Maker’s Mark, hand-sealed with that trademark red wax.

On to the tasting room, where a sip discloses that this is no longer your granddaddy’s Friday night firewater. A renaissance of premier, single-barrel, or small-batch makers has repositioned bourbon as an elite sippin’ spirit—as reinforced along the Urban Bourbon Trail.
First stop: Proof, the Hotel 21C’s bar/restaurant, where I ordered an $18 sampler—Woodford Reserve “barrel-selected just for us,” my server claimed braggin’ rights for the mellow, sweet, aromatic pour. The Pappy Van Winkle (hey, I’d order it just to say the name again), aged 12 years, is “good with, or for, dessert,” she continued. And Old Forester Signature, with a peaty nose and peppery finish, reminded me of a single malt Scotch.

At the Galt House Hotel’s Jockey Silk bar, you’re invited to design your own flight with the help of a tasting wheel, which divides its many labels into categories such as Sweet (rich, caramel, fruity), Intense (charcoal, woody), and Smooth (easygoing, subtle nuances). Compare your flight’s trio by color, aroma, clarity, taste, and finish.

At BLU, the Marriott’s cozy bar, barman Jason Gruener reveals that Maker’s Mark is the best-seller, but steers me to his personal picks, like Blanton’s (smooth and rich), Four Roses, (light and easygoing), and Basil Hayden (less sweet, more smoky).

At Maker’s Mark Restaurant, the bourbon list goes on forever. I tried the rich, mellow Elijah Craig; the crisp, clean Rabbit Hill; and Bulleit, a well-balanced local favorite. More bourbon turns up in the chef’s salad dressing, as well as flavoring the duck-filled ravioli; the rock shrimp served with bourbon mustard aioli; and the bourbon ball dessert.

At the five-diamond Seelbach Hotel’s bar, where F. Scott Fitzgerald beat you to the bottle, bourbon is poured in tulip-shaped glasses from a long list that naughtily carries no prices. “Figure about a dollar a year of age,” the bartender clues me in, as I summon the Jefferson 8-year small batch, toeing the line between spicy taste and smoothness. The Seelbach’s dining room dresses up grits, that Southern staple, with bourbon-poached pears, while foie gras rates a bourbon-chocolate sauce. Don’t overlook the bourbon bread pudding, or the famous bourbon pecan-chocolate pie.

At its neighbor on the Urban Bourbon Trail, the elegant bar at the Brown Hotel (grand piano, hand-painted ceiling), the bartender proclaimed Bulleit “today’s hip bourbon,” with good ole Pappy Van Winkle’s 20-year version as a luxe contender. “Drink it neat,” she instructs.

But over at Bourbon Bistro, our waiter told a different story. “After a first sip, add water, which opens it up, like air does to wine.” Whatever. It’s a matter of personal preference, so just do what you like. (But please don’t go as far as the guy from Nebraska on the next stool, who added Coke to his $12 pour.) And suit your own taste buds: Bourbon relying on rye is spicier, more complex—such as the Jefferson Reserve—while those adding wheat to the mash produce a sweeter, stronger vanilla flavor. “Ezra B is my go-to bourbon,” our server said, recommending the 12-year single-barrel 90-proof treat. Bourbon Bistro stages monthly bourbon dinners, pairing a distiller’s several labels with special menus featuring the spirit.
Stop at the North End, just off the official bourbon trail, for Mint Julep pancakes, or a strip loin with blue cheese-bourbon sauce. Or Corbett’s, serving a bourbon bread pudding rich with chocolate.

But Lynn’s Paradise Café takes the cake—er, toast—with its Bourbon Ball French Toast, which won a knock-down, drag-out with Bobby Flay on the Food Network’s match. “We whupped his ass,” Lynn says. I could go on (well, actually I did), but Lynn’s makes a perfect finale, for eating Bourbon French toast surrounded by winners of the café’s Ugly Lamp contest, in the shadow of the parking lot’s 10-foot coffeepot. Proves my point: It’s the bourbon that keeps Louisville weird. So, drink up.

To plot your course, contact the Louisville Convention & Visitors Bureau at 800-626-5646 or www.gotolouisville.com.