Review: “The Secrets of Blackmoor” Probes the Backstory of Dungeons & Dragons 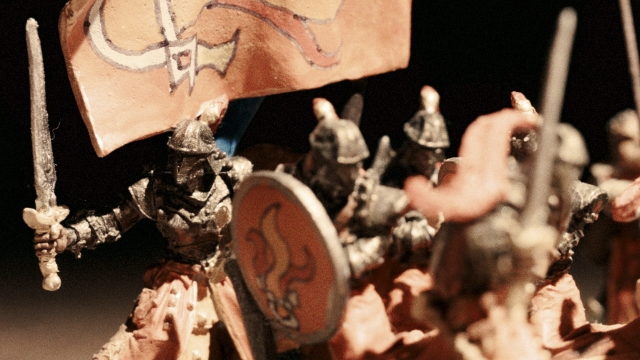 The Secrets of Blackmoor – The True History of Dungeons and Dragons is an absorbing documentary that tells the backstory of the Dungeons and Dragons game and how the influence of war gaming was central to its creation. It also shines the light on an injustice that occurred within the original group—a group that experimented and innovated the cultural phenomenon into existence. Filmmakers Chris Graves and M. Griffith conjure a vivid sense of how players in the 1960s and ’70s with a passion for war games laid the D&D groundwork.

They also shine light on an unjust exclusion that happened as the popularity of the game increased. Though D&D would go on to be enormously profitable, fame and fortune came to only one of its co-creators, Gary Gygax. The other co-creator, David Arneson did not. Interviews with many of the original gamers impressively set the record straight.
Secrets of Blackmoor also captures the war game vibe its earliest players reveled in. Imagine war gaming with a thousand Napoleonic miniatures on the table. We hear reminiscences of David Weseley’s French army vs. Arneson’s Russian figures. The classical concepts of war, military, and manhood were ways in which young men could vicariously develop these concepts within their owns minds as well as cultivate their imaginations and their intellectual scope.
In the Twin Cities in 1963, a group of young men with an interest in military games got together to play war games at their homes. The film effectively puts forth how an 1880s war tactics manual titled Strategos was the source for their understanding and apprehension of what would become D&D and impact the entire realm of role-playing that gamers drench themselves in today all over the world, undreamed half a century ago. The Secrets of Blackmoor richly contextualizes its captivating back story.
The Secrets of Blackmoor – The True History of Dungeons and Dragons
Wednesday, May 8
6:30 pm Red Carpet Events withdrawn& crew
7:30 pm Screening
9:30 pm Q & A
Heights Theatre, 3951 Central Ave., NE, Columbia Heights
Twin Cities Film Festival
twincitiesfilmfest.org