Revealing and at Times Profoundly Moving, ‘Queer!’ is Truly at the Cutting Edge 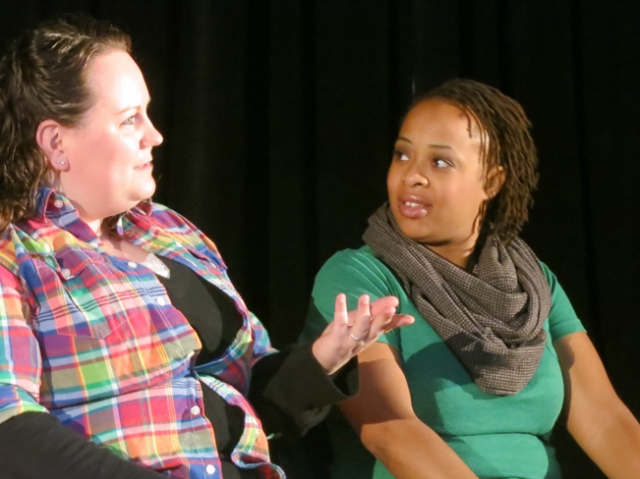 Gadfly is definitely the ‘little theater that could’ and so it does with their current compelling showcase on divisions within the queer community, simply titled ‘Queer!’ Immanuel Elliott and Cassandra Snow have assembled a wide range of vignettes and interviews shaped into scenes, that boldly speak out about how people in the glbt community, a community known for being marginalized and supposedly open-minded, can also marginalize their own.

Queer! has us consider how gay men can categorize other gay men in terms of race, looks, age, health, and income. There’s artistic competitiveness among lesbians. There’s the mindless exclusion of bisexuals for having to choose one traditionally gendered person or the opposite. What about those who are gender-fluid, androgynous, or asexual? These people are sometimes granted second class citizenship or worse, nonexistence, by other GLBT folks.

Snow, Elliott, and Erica Fields have purposefully directed the numerous scenes played by a cast of varying abilities, but with 100% heart and passion. Because the performances are so intensely felt by each and every actor the audience is drawn in by the power of intimate honesty and truth-telling – something not seen enough of at more established theaters.

What if you are are a lumberyard worker who will be harassed out of his job, therefore, his ability to live, if he comes out? Think of all the dubious platitudes tossed around about how coming out solves everything from personal problems to world politics. And what if you are what Queer! considers as questioning, or bisexual, or pansexual, or polyamorous? It’s not only naive, it’s ignorant to think you can introduce such concepts where the learning curve is so far behind.

Moreover, consider this: if the learning curve of out gays and lesbians is so far behind when it comes to issues of sexual and gender otherness, how on earth can one expect isolated blue collar straights to be on a par or ahead of such gays and lesbians?!

For example, Queer! has strong scenes about ostracism: an MTF transsexual who wants to identify as a woman is rejected by lesbians. A bisexual man is derided by gay men. A bisexual woman is shut out of experiences because of her age and how she views her age and her alcoholism. Nonwhite gays and lesbians are marginalized by white gay and lesbian privilege. There are reference points to how the 1980s AIDS crisis marginalized gay men.

Some scenes raise cultural concerns. For example, Indian customs around arranged heterosexual marriage are in one case, shown to have a gay component. In another vignette, the gay bar scene is not a safe, but a volatile, space where misogynist actions by gay men could be perpetrated on women.

One fascinating sequence has a woman of color who may or may not be paranoid about what she perceives as a racist and lesbophobic action by a man. However, she refers to his acne and that he could be a high school dropout. She insults in the spirit of bigotry in terms of his physical looks and his class. Yet it’s an honest look at how we can project our insecurities. Who has not done this? 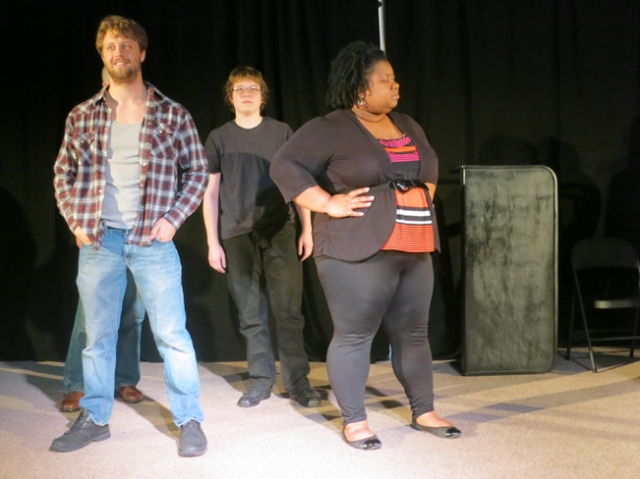 However, intersex people are not part of Queer! My hope is that if the showcase is revived, which I truly hope it will be, then intersex folks’ stories will be added.

Though Queer! is refreshingly nonacademic, it’s a vastly more intelligent take on varying views about gender and sexuality than certain so-called gender experts who frankly, hijacked the discourse years ago and turned it into elitist mumbo-jumbo. Gadfly gives us insight. Gadfly is populist, raw, clear, and forthright.

That clarity also resounds when we hear a recording with unsettling antigay sound segments by figures as varied as Margaret Thatcher and sundry fundamentalist Christians. It brings home the fact that in order to stave off prejudice we have to start addressing our own by listening to one another’s concerns with an open mind and compassion.