Gays and lesbians, especially those living in central and northern California, flock regularly to the ski and lake recreations of Lake Tahoe—which straddles the state border with Nevada—and the nearby city of Reno, known for its many casinos. This isn’t a major vacation hub among party types, although the annual Lake Tahoe Gay and Lesbian WinterFest in March brings out a flood of revelers, but you will find a smattering of nightlife options in Reno. This is a great destination for romantic getaways, gaming (on the Nevada side), and year-round recreation, including skiing, fishing, boating, hiking and mountain biking. 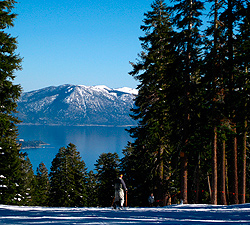 The region is a three? to four-hour drive east of San Francisco, travel times depending on whether or not you leave during the weekly Friday afternoon rush (Sundays coming back can also be slow). From Las Vegas or Southern California, the 450? to 500?mile drive takes many hours—most travelers opt to fly here from those parts.

It takes about 45 minutes to a bit more than an hour to drive between Reno and the towns on Tahoe’s southern shore, and about 30 to 45 minutes from Reno to the north shore of the lake.

Some 6,200 feet above sea level and spanning 20 miles north to south, Lake Tahoe is a breathtakingly scenic alpine lake, surrounded on all sides by evergreen-studded mountains. The lake’s water is among the purest of any in the world—far cleaner than the drinking supplies of most U.S. cities, and remarkably clear. A couple of gay-owned inns lie near the shoreline in South Lake Tahoe, California. The state border divides this town almost imperceptibly from Stateline, Nevada, where several gaming hotels are about the only features that really distinguish it from its California neighbor.

Tahoe gets considerably more snow, on average, than the ski areas in either Utah or Colorado. You’ll find several highly respected resorts, with Heavenly among the most popular and the closest to South Lake Tahoe—Squaw Valley, Mammoth, Diamond Peak, Northstar and Kirkwood are among the other notables.

Northstar-at-Tahoe, which is one of the closest of the area’s ski resorts to San Francisco, underwent a huge and stunning redevelopment of its ski village in 2008 and is building a Ritz-Carlton hotel, slated to open in 2009—it’s become arguably the swankiest and trendiest resort among GLBT visitors. But Heavenly has the most extensive and varied terrain, incomparable views and proximity to the gaming action of Stateline—it’s also where WinterFest gay ski week activities take place. Both of these resorts are top picks if you’re coming to the area in winter. Even in summer, you should take the aerial tram at Heavenly Resort up 2,000 feet above the lake for knock-out views of the entire region.

Despite efforts in recent years to redevelop the city’s riverfront and spruce up some of the gaming hotels, Reno is a considerably less flashy and touristy version of its cousin in the southern end of Nevada, Las Vegas. As you enter downtown on the main drag, Virginia Street, and drive under the glittering (rather kitschy, really) Reno Arch, a sign welcomes you to “The Biggest Little City in the World,” an old promotional slogan local boosters came up with in the 1920s. In fact, you can see the original and more charming wrought?iron Old Reno Arch nearby at corner of Mill and Lake streets.

Some of the attractions here seem well-suited to the casino aficionados and many conventioneers, but others appeal to cerebral and/or outdoorsy types. You can spend a whole afternoon strolling the Truckee River Walk, which leads several miles along the city’s primary body of water and is said to have the wedding rings of countless divorcees lying at its bottom (Nevada has long been famous for its simple divorce laws).

Reno and the Tahoe region have plenty of excellent restaurants, with one of the best concentrations in South Lake Tahoe. Here at the intimate and diminutive Cafe Fiore, a reservation can be tough to score, but the superb Northern Italian cuisine merits the effort. A short drive west of town, Evan’s American Gourmet Cafe is a top pick for cutting-edge California-inspired cuisine like a Napoleon of coconut-cured salmon, crab and tobiko caviar with coconut creme fraiche and a mango reduction. The laid-back Beacon Bar and Grill is a waterfront hangout popular with lesbians and gay men—expect casual but American fare and a very nice Sunday brunch.

In northern Tahoe, some excellent dining options include Bite in Incline Village, which serves first-rate tapas, and the jazzy Baxter’s Bistro at Northstar, which is known for its outstanding mod-French cuisine. Try the venison chop with a juniper-Syrah demi-glace. Just a 15-minute drive north in the cute town of Truckee, you’ll find great dining at several places, with the Pacific Crest Grill a particular standout.

Reno has a handful of notable upscale restaurants but is even better known for some cheap, dive-y spots serving terrific food. For breakfast, you shouldn’t miss Peg’s Glorified Ham & Eggs, which serves an eggs Benedict topped with chipotle hollandaise sauce and served over chorizo sausage that’s simply amazing. Beto’s, across from the Patio gay bar, is known for its inexpensive and delicious Mexican food, including delicious seafood ceviche as well as potent garlic shrimp. In the back of the smoky Nugget Casino, you can savor juicy hamburgers at the Awful-Awful, a total dive that’s nevertheless a hit with carnivores. Overlooking the Truckee River in downtown Reno, gay-popular Dreamers Coffee House & Deli is a nice spot to people-watch and enjoy a light snack, while the neighboring Wild River Grille serves upscale contemporary American food and is a favorite gay-date spot.

It’s not famous for gay nightlife, but Reno does have the greatest concentration of GLBT bars within a 200-mile radius. Most of them are laid-back neighborhood joints, a favorite being the Patio, in an attractive and cheerfully furnished cottage on the western edge of downtown. It welcomes a mix of lesbians and gay guys—a nice range of beers and wines are offered, too. Tronix is the city’s top disco, set on a dreary stretch of strip malls south of downtown, but with a festive interior and friendly staff. It’s mostly standard club music. Across the street, Neutron is another popular option for dancing. Neighborhood-style bars elsewhere in town include the the 5 Star Saloon, which is open 24 hours and has slots; and the quite cruisy 1099 Club, which is also open all night. Tahoe has no gay-specific nightlife, although you’ll be made to feel quite welcome at most of the bars in the area popular with skiers, hikers, and other visitors—this is a fairly liberal part of the world.

Reno has no gay-specific accommodations, but most of the big gaming hotels make a concerted effort to court the GLBT market, and both mid-priced and economy chain properties abound. Best advice if you’re spending the night in Reno for the first time: Book a room at one of the downtown casinos, which puts you within walking distance of most of the city’s better restaurants and a few of the gay bars, as well as several additional casinos, some performing arts venues and a fair amount of shopping. The Silver Legacy is quite nice, and the adjacent Circus Circus has always been popular with gay visitors.

South Lake Tahoe has some excellent gay-friendly properties. Outside of Palm Springs, Holly’s Place is probably the most popular women’s resort (all are welcome, but the clientele is mostly lesbian) in California. This evergreen-shrouded compound of upscale cabins is within walking distance of the lake. It’s a very social place (with pets allowed), but guests can freely opt to mingle or to keep to themselves as they please. Jerry Birdwell and Kevin Chandler run the Black Bear Inn, a spectacular rustic-style lodge with a 34-foot-tall river-rock fireplace warming the great room. This wonderful getaway, which caters to both straights and gays, strikes the perfect balance between a cozy B&B and a luxurious small hotel. In Stateline, the Harrah’s Lake Tahoe and Montbleu Resort Casino & Spa are reliable, upscale lodging options with large casinos and extensive dining and recreation options.

The jewel resort of the Tahoe region, however, is Northstar. The elegant Ritz-Carlton Lake Tahoe will bring five-star lodging to the area in November 2009, but this refined property midway between Truckee and the north shore of the lake also has myriad condo rentals, from more attractively priced older units to super-posh luxury pads with full kitchens, marble baths, gas fireplaces and gorgeous rustic-contemporary furnishings. Northstar is set around a bustling village with tony boutiques, ski and sports shops and lively cafes. When you’re looking for a romantic, outdoorsy weekend in the mountains, this laid-back yet sophisticated resort fits the bill perfectly.