Remembering James White and His Deep Connection with COMPAS 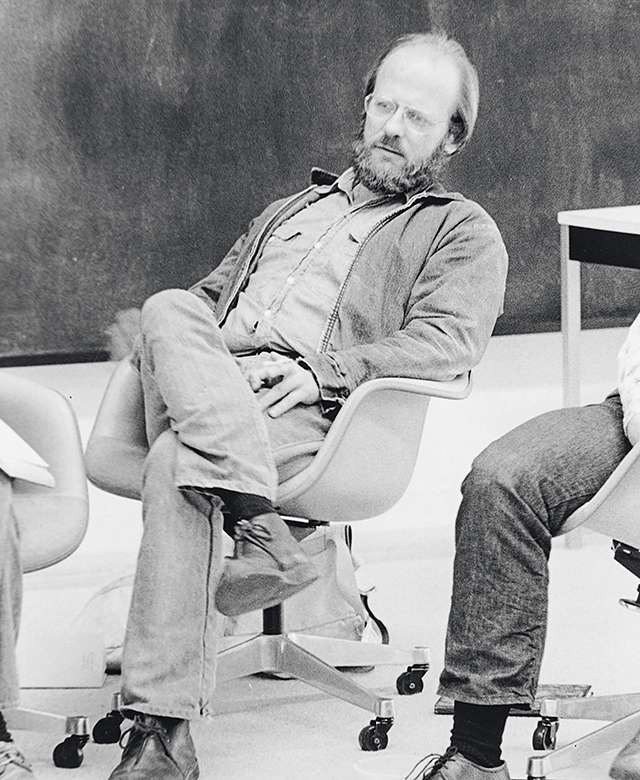 When gay poet James L. White (1936–1981) came to Minnesota in the 1970s, the Twin Cities had become the major cultural center between Chicago and the West Coast, and would come to rival Chicago. The Walker Art Center, the Minneapolis Institute of Arts, and Minnesota Orchestra had been nationally esteemed for decades. The Tyrone Guthrie Theater and Children’s Theatre Company, both founded in the 1960s, were achieving international status. The art of the written word began to find institutional legs in the ’70s with the Playwrights’ Center and The Loft Literary Center and in the ’80s with Graywolf Press. 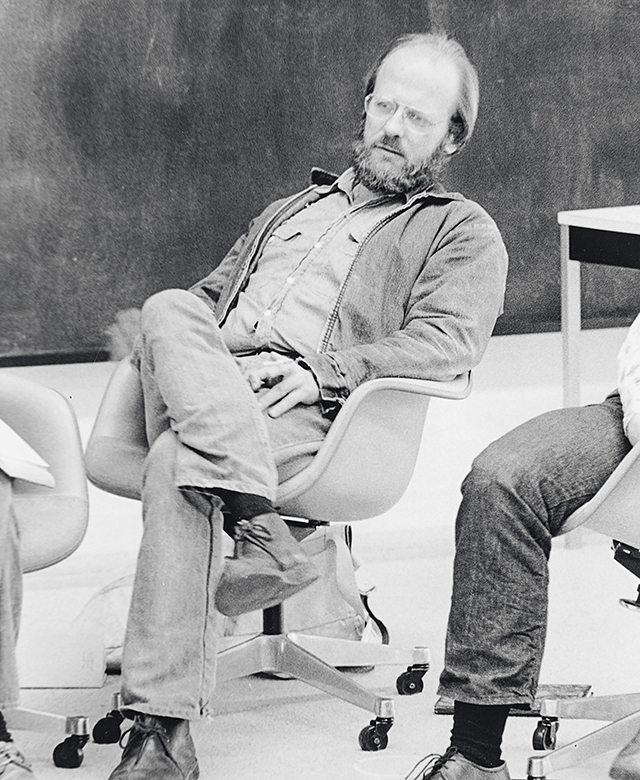 Corporate donors, individuals, foundations, and agencies contributed and were formed to contribute to the nurturing and development of talent and of making Twin Cities arts accessible to communities. One such organization was COMPAS (Community Programs in the Arts and Sciences). Its origins were rooted in a moment in 1967 when the National Endowment for the Arts (NEA) approached Molly LaBerge (now Molly Taylor) to set up a pilot program to give high school students classroom experience with professional poets who were paid. It was the end of the Johnson administration and it was a part of the President’s dream of decentralizing the arts out of the west and east coasts so diverse voices between them could be heard. Despite national political storms, Minnesota kept to its pro-arts course and in 1974 COMPAS was born in St. Paul, with Taylor chosen to lead the organization. It also came to expand its assistance toward other art forms, not only poetry. For over 40 years they’ve been a source of enlightenment.

In the ’70s Minneapolis-St. Paul was sometimes referred to as the San Francisco of the Midwest, both favorably and unfavorably. Artists, writers, and gay men were drawn to it for its freedom of expression, its opportunities, and its social tolerance. James White was one of those pilgrims. This was a time when being gay or lesbian was something few people talked openly about. Transgender was a term that had not come into wide use. That said, gays and lesbians had long found their niche in arts communities. Again, White was one such man.

White was born in Indianapolis and ultimately earned an MA in Literary Criticism from Colorado State University. COMPAS made him part of a pilot program where he taught on a Navajo reservation and in Minnesota public schools. He edited poetry collections of work by Native American children and adults. His own poetry was reviewed favorably and his own poetry volume, The Salt Ecstasies, published by Graywolf Press the year after his death, is a modern classic and vital reading for lavender people. It is dedicated to Kate Green. Poet and critic Carl Phillips wrote, “White’s was a crucial voice to encounter, for what is confirmed as possible — longing, homosexual longing, the expression of that longing in a poem.”

Mark Doty, who edited Graywolf’s poetry Re/View series of essential poets, wrote the introduction for the series The Salt Ecstasies volume. When you open the book he says, “White combined the rhetorical strategies of deep image poetry with a startling emotional directness and a frank treatment of sexual longing. White’s work has remained a significant influence for a number of gay American poets, but his consideration of desire and loneliness reaches beyond any categories of identity.”

When reading about others’ impressions of White and hearing the thoughts of those who knew him, he was affectionate and when reading his poetry you can sense that. Taylor has fond memories of her friendship with White. She shares, “James had empathy for people who didn’t have much. Much of his life had been stifled. He knew he would find kindred spirits here. He knew that he could bloom more as a person and as a writer if he could be with more people in an arts-focused community. James was very kind to everybody and was very interested in the writers he worked with and their writing. ‘You’re a really good writer. I’m interested in your ideas,’ he’d say. He was a leader but he wouldn’t have thought of himself as that. He was a leader by example in being strong and true to himself. My two girls adored him. He loved nature and he loved owls.”

That love of nature brings to mind that Taylor and White attended a three-week Scottish Arts Council seminar at the Isle of Sky. There they connected with administrators, teachers, and writers. Time was spent at a school where the Celtic language was spoken. It’s the deep connection between nature and language that emanates from White’s poetry. And erotic feelings are germane to nature. Some of the people who knew White in his Minneapolis years knew he was gay. Others did not. For those activists who would insist that was an issue, I’d beg to differ. It was a completely different time. 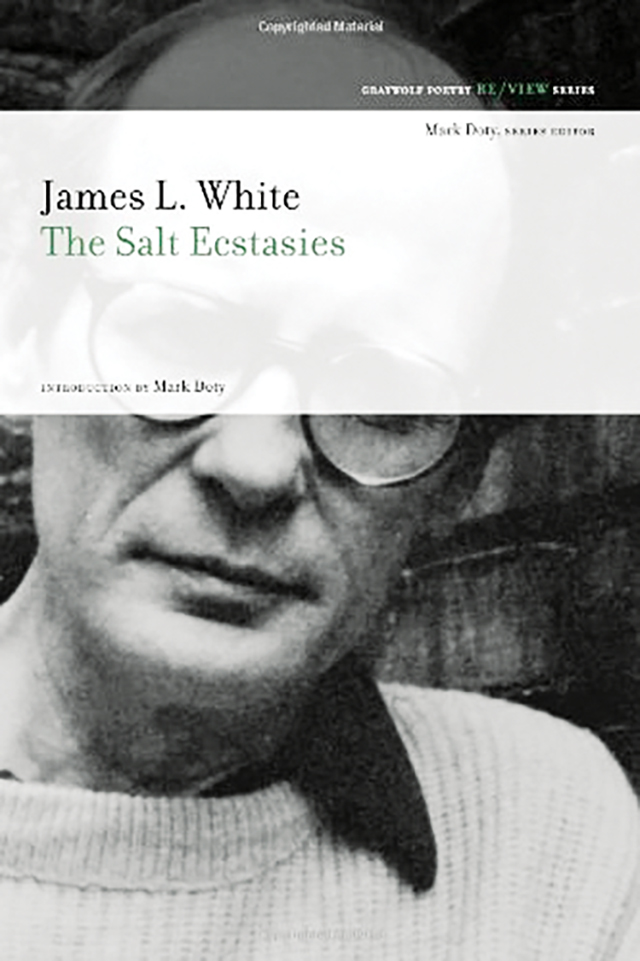 MacArthur Award-winning writer Patricia Hampl, a close friend of White’s, recalls his untimely death: “Jim died of congestive heart failure, actually just before the scourge of AIDS hit — a term he probably never heard, though I sometimes think people assume (given the timing) that he was a victim of that terrible time. He would have needed a heart transplant to survive, but that was not possible (I no longer remember why).”

Hampl continues, “We were all so young (though Jim was somewhat older) that I don’t think we understood he was dying; not until toward the end. Maybe Kate Green was wiser.” She observes: “Jim had been a dancer in an earlier career. He had a dramatic flair, and an utterly beguiling sense of fun; sweetly wicked and the kindest friend imaginable. He was a very fine poet, and we all (I say ‘we all’ meaning poets who got to know each other working for COMPAS in the Writers in the Schools early days) adored him. He had a sly sense of humor. It’s hard to describe someone who could gossip and yet not be cruel. Like many of us, Jim was deeply touched by the poetry of James Wright, and the clarity of his lines came, I think, from that. He was an elegant lyric poet.”

When White passed away in July 1981, Hampl was on Minnesota’s North Shore working on a book. She wrote a poem for and to him titled Last Letter. Find it in her second book of poems, Resort and Other Poems.

In 1983 the gay literary quarterly, the James White Review was founded by Grey Baysans, Paul Emond, and Phil Willkie. Emond left in 1985.  Baysons resigned in 1991. It was transferred to the Lambda Literary Foundation in Washington, DC in 1998. Willkie was listed as publisher emeritus until it ceased publication in 2004. During Willkie’s era the quarterly developed national and international prestige, and James White’s name became far more widely known. Willkie reminisces, “I enjoyed the business side, started going to the nation’s book shows and doing an annual reading in New York from 1986 that had hundreds attending.”

In the present day when the written word and art generated by corporate interests permeates consciousness, James L. White hearkens to a time when a human being with a vision could clearly stand on the foundation of his or her individuality and create with the faith that if it was good, it would come to be known and appreciated. Willkie’s hands-on approach to getting the word out is also exemplary of such a time. Taylor’s diligence and tenacity helped ensure that opportunities would indeed knock and schoolchildren would benefit and develop from that. We all stand on their shoulders and can draw inspiration from their achievements. Thankfully, there are still organizations and individuals who champion the artist. COMPAS is still around despite the wild political and economic storms of recent years, as are many other arts-sustaining groups. If anything, the drive to reach as many different people and groups is even stronger. Momentum can build more possibilities.

COMPAS Executive Director Dawne Brown White (no relation to James) observes that “what makes COMPAS really unique is we have made it possible for people to discover their own voice and experience art-making, guided by practicing and talented teaching artists like Jim White. For more than 40 years, we have worked within communities, especially those underserved by the arts establishment including women’s shelters, juvenile justice centers, and older adult housing residences. Daily our work reminds us that everyone’s story matters, and every person deserves the opportunity to learn to express their thoughts, feelings, hopes, and dreams by experiencing the joy of creating. COMPAS also remains a leader in helping Minnesota expand our horizons by maintaining a diverse roster of artists who teach their art form by presenting authentic cultural performances.”

In conclusion, from time to time I come across out gays and lesbians who pooh-pooh the arts, which is their call and their right. And they tend to be few and far between. That said, I also run across gays and lesbians who seem not to understand the level of society’s acceptance of them is generally supported by the arts presence in a community. If you are someone, like me, who came to the Twin Cities because it was a GLBT mecca, then you owe thanks to the arts infrastructures here. The collective emotional infrastructure of a brilliant arts scene is all the better for lavender folks. Whether an art work is focused on lavender issues or not, it probably reflects some kind of creative process that engages something beyond linear ways of thinking that drive standard prejudices. So, if you are lavender, art is in your best interest.

For more information about COMPAS, go to www.compas.org.
The Salt Ecstasies by James L. White is available at www.graywolfpress.org