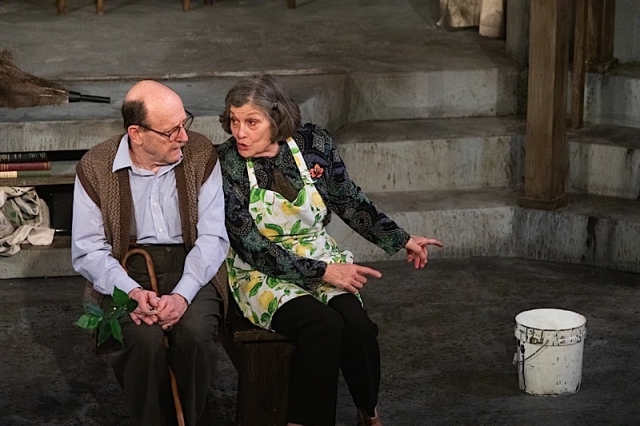 A central conflict that animates Shul by Sheldon Wolf is between two older members of a synagogue. They are Miriam, a Jewish woman struggling financially, and Golden, a wealthy Jewish man who has swept in out of the blue to wield influence about the fate of the synagogue that she has shaped her life around, but which he dismisses with contempt because of psychic wounds he has or thinks he has suffered because of Judaism as perceived through the lens of his childhood. Golden holds his blanket rejection of religion in a psychic vice grip, but the searing Miriam presses under the surface to expose the shallowness and aridity of what he self-deceptively thinks is an intelligent and enlightened view about that mysterious phenomenon called faith. He is blind to the fact that he actually declared spiritual warfare on Judaism long ago.

Nancy Marvy and Nathaniel Fuller are spellbinding in their portrayals. Miriam is nobody’s fool and sees the folly in rejecting time-tested truths out of hand. Golden presents himself as superior, thinking his moral relativism and vain materialism are truer. But Miriam cuts right to his soul, exposing the emptiness there. A dangerous moment of existential truth.

Fuller is stunning as a man who abruptly finds himself looking into the abyss. He fails to perceive that his godlessness, which is in itself a belief system of its own, has become an absolute truth. For a man as old as he is, Golden overplays the simplistic “religion is hypocritical” card far too loosely and petulantly. The glorious Marvy reverberates as a female Moses metaphorically hurling the tablets at the false god of the Golden Calf as she exposes him to himself. 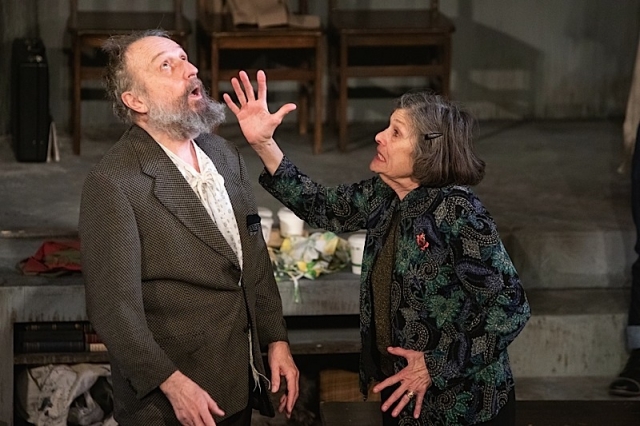 Moreover, Miriam is a unique character in contemporary drama. Though we aren’t told where she stands on various political issues, she is an older woman grounded in traditional values. In her case, those values are rooted in Judaism. She is compassionate and flexible but not the obligatory stereotype of a narrow-minded conservative woman. In other words, like all the other Wolf characters, she is a flesh and blood human. Miriam is reminiscent of the Jewish wife in Finn & Lapine’s 1990s masterpiece, Falsettos, played beautifully by Eden Espinosa in it’s recent Broadway revival national tour at the Ordway. Both characters could be genuinely called a term which was bandied about 20 years ago—compassionate conservative.

Acclaimed actor Robert Dorfman has worn the director’s hat for this world premiere production. Clearly he is an actor’s director as every actor in his terrific cast feels the stakes are high right down to the marrow of their bones. Shul involves a group of elderly Jews whose crumbling and poorly funded place of worship and fellowship is dwindling in congregants and which lacks funds for repairs the facility sorely needs. In an American inner city, which has also been crumbling, their Eitz Chaim Synagogue has been the epicenter of their daily lives, and many evenings as well. Will it be sold or will they be compelled to share the space with those of another faith? Tough choices!

Raye Birk endears as a sweet man trapped in nostalgia. Paul Schoenack shines as Friedman, a good-natured man who fears that closure of the shul will mean moving on and moving in with inhospitable relations. Charles Numrich is ecstatically wonderful as Ezra, a wild man figure who sees the hole in the shul ceiling not as a flaw, but a window to G-d in heaven. If you’ve read Robert Bly, you know the type I’m talking about.

The savvy Wolf has captured how today’s volatile economic reality is affecting society across the generations. He contrasts the elders with three younger figures. A vibrant Avi Aharoni as Abe, the shul president, captures the essence of the wiser younger man the elders have entrusted their future to. Think of your favorite nephew. Through Abe we come to understand the real difficulties of trying to maintain a traditional religious institution in a time in which tradition is too often denigrated for no good reason. 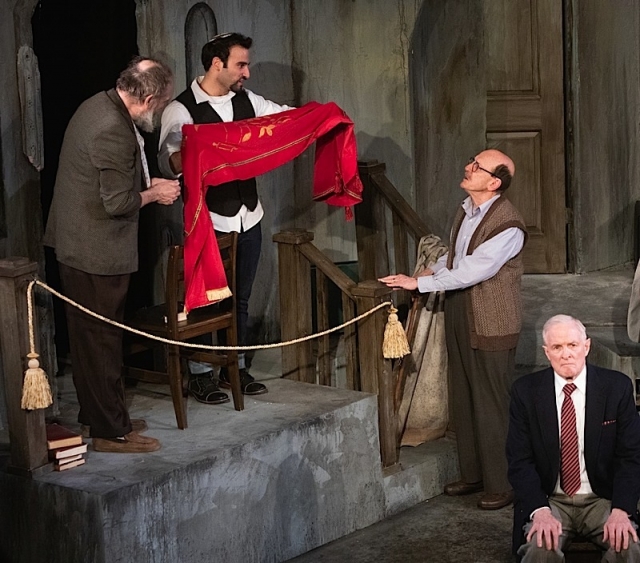 Dexieng Yang gives a sharp edged performance as a young Jewish realtor whose seems to be headed down the same materialistic path as Golden. However, her financial paranoia stems from insecurity as opposed to making money her Golden Calf as Golden has done. That said, Wolf might consider writing a sequel about just where her attitudes and values will lead her.

Joher Coleman as a Sikh community representative seeking to buy out or share a religious space with Eitz Chaim, brings a vivid sense of integrity to his role. Of all the characters he is the only one who seems to have a footing in the possibility of a bright future. Will this become a Yamaka v. Turban ordeal or will they work it out? You’ll have to see Shul to find out. Indeed, Shul, whatever your faith is, or even if you don’t have a faith, is a compelling and substantive play about religious issues today.

Michael Hoover’s set exudes a sense of a once lovely building worn away, distressed by the passage of time and water. The shadows of its faded beauty have been artfully realized.