“Red Velvet” Captures the Period, Style, and Racial Tensions of the 19th Century at the Southern Theater 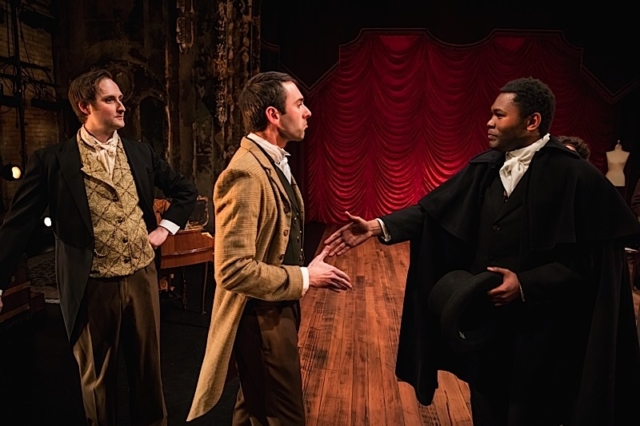 In 2012 Amy Rummenie revealed what a strong director she is when it comes to eliciting the look and feel of the 19th century with her outstanding production of Oscar Wilde’s An Ideal Husband. Five years later that gift is in evidence again with Red Velvet by playwright Lola Chakrabarti. The subject is Ira Aldridge, the most acclaimed African American Shakespearean actor of the 19th century.

Red Velvet focuses on a time when Edmund Kean, the biggest Shakespearean stage star of the time, takes ill and Aldridge is assigned to take his place for a performance at London’s prestigious Theatre Royal, Covent Garden. The sharp Walking Shadow Theatre Company cast, under Rummenie’s sure hand, renders the jealous and racist tensions one would expect and those tensions are utterly palpable as you watch the action on stage. How fitting that the venue is the historic Southern Theater.

JuCoby Johnson is stately as Aldridge and strikingly conveys how the man not only challenged the status quo because of his skin color but also because of his approach to William Shakespeare’s text. Chakrabarti has astutely written Aldridge as a artist who pushes his fellow actors toward interpretations more tapped into the feelings and psychology of Shakespeare’s characters. We get a good idea of how one actor’s energy can affect others in a cast on a psychic level. Aldridge is like a theatrical John the Baptist calling for a truer, more authentic way of rendering a character on stage. Red Velvet becomes very much a play about the shift in how audiences would come to see the acting craft, as well as a document of sorts on the racial barriers set against an unquestionably talented and deserving artist.

Elizabeth Efteland also gives a standout performance as actress Ellen Tree. Her turn is simultaneously fragile, delicate, and powerful. Efteland has a quality reminiscent of hallowed English actresses like Jean Simmons and Susannah York. In terms of today, she would fit right in playing a sister of Michelle Dockery or Laura Carmichael.