Return with us now to those thrilling days of yesteryear!

This invitation was extended to the Greatest Generation as it indulged in that era’s high-tech, sound-based entertainment: radio. In those golden days of yore, whole families clustered and sat and stared hypnotically into the newfangled contraption’s inverted wooden face as if it were a campfire, surrendering themselves to the story of a masked cowboy and his faithful companion, or a married couple whose zany union was composed of hilarious lies and recalcitrant mix-ups, or a criminal crime fighter who was as invisible to his enemies as he was to his listeners.

But every era ends. 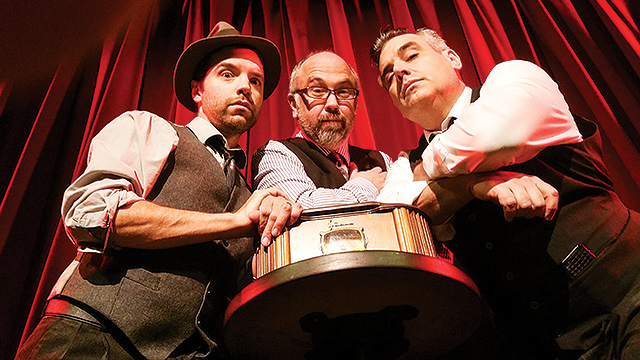 As the 1950s melted into myth and history, radio drama as an artform went the way of the dodo (or seemed to) but the dawning of another era’s high-tech, sound-based entertainment, this one known as “podcasts,” has saved these old stories from the outer edge of extinction, thanks in no small part to the crew at Ghoulish Delights.

“Ghoulish Delights is my theater company, and I work with Joshua English Scrimshaw and Eric Webster,” explains Tim Uren, a Twin Cities-based actor, director, and playwright. According to its website, Ghoulish Delights (www.ghoulishdelights.com) is “dedicated to staging tales of horror and suspense.”

Ghoulish Delights began its undead existence as a podcast dedicated to salvaging Golden Age radio plays, and that dedication has evolved into live performances in front of a live audience via a series of presentations appropriately known as the Mysterious Old Radio Listening Society. But radio’s younger cousin decides which scripts will be performed in front of a modern, interactive assembly.

“When we started the podcast, we wanted our conversations to have a structure, and of whether or not an episode ‘stands the test of time’ was chosen as a way to frame our comments,” Uren remembers. “It’s also a way to inherently say to anyone who is new to the genre that it’s okay to be put off by aspects of an episode that are dated or quaint.”

The novelty of these limbo-living scripts is a double-edged sword of sorts. “Writing and performing styles are typically very different now than they were,” Uren observes. “Technology and cultural references can lose their punch after a few decades. That can all be an obstacle to enjoying these stories, but it’s our belief that many of these broadcasts still deliver a powerful experience despite these obstacles.”

Once a script has been approved for the patented Ghoulish Delights treatment, the cast takes the elevated stage at the James J. Hill Center, sharing the space with a confounding menagerie of Rube Goldberg-esque equipment as varied as a vacuum pipe, a pair of shoes, a box of matches, and an inverted bicycle. A desperate dance of necessity perpetrated by the actors between lines turns these implements into unlikely sound effects generators, and those crafted noises garnish the extant performance.

“We’ve become sensitive to each sound we make during the show,” Uren assures. “Picking up and putting down props that we use for sound effects can make unintended noises. Since we’re asking the audience to focus only on what they hear, we really try to avoid those sorts of bumps and clanks.”

It’s the characters, however, who tell the story, thanks to the life lent to them by the actors, and the interaction between the actors, the characters, and the audience can be specific to this kind of performance. “It was a little off-putting the first time we noticed audience members closing their eyes during the show,” says Uren, recounting how some members of the audience choose to let their fancies do the walking during the live shows. “We were afraid folks were dozing off. Obviously we figured it out, but there was definitely a moment of panic for each of us.”

The appeal of the performances, for audience and actors alike, is the product of an unlikely alchemy. “It’s a mix of the immediacy of live performance combined with the audience engagement of audio’s ‘theater of the mind,'” Uren reckons. “It isn’t surprising that this kind of collaborative storytelling produces such devoted fans. The story isn’t complete until it’s actually in the audience’s heads and they add all the visual elements with their own imaginations. And with the live version of the show, fans can share their experience with others.” Just like the radio experience of olde.

Ultimately, returning to the thrilling days of yesteryear looks an awful lot like traveling into the future. “Recently, audio storytelling is experiencing a resurgence and we’re excited about the new interest in an art form we love,” Uren sums up. “We aspire to connect modern listeners to a time when this form was at a peak and to provide facts and background about that era. We also aim to celebrate these classic (and some not-so-classic) shows with those longtime fans who have loved these shows for decades. We are unapologetic old radio nerds with wildly infectious enthusiasm for the shows we love.”