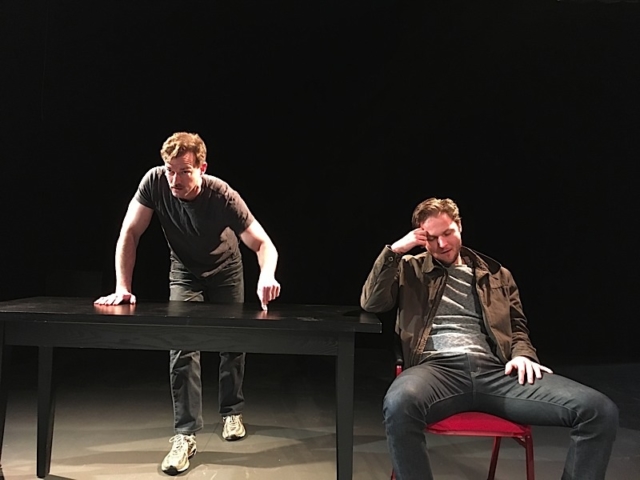 The police drama, A Steady Rain, has taken its place in recent years as a marvelously meaty vehicle for two accomplished actors. Its current production by Gremlin Theatre at their new space in St. Paul most definitely delivers that and then some, to say the least, with Dustin Bronson and Peter Christian Hansen as Denny and Joey, the two Chicago beat cops who have been bonded since childhood.

However, the play itself has been criticized since its first production just over a decade ago for its depiction of cascades of misfortune that befall the pair, especially Denny, the more alpha of the two. This is seen by some as not credible. However, I beg to differ. I see A Steady Rain as agonizingly astute about what can happen when negativity feeds on negativity. Cops who must continually contend with gang subcultures, dope addicts, thugs, rapists, maniacal pimps, abused sex workers, and who are trying to maintain personal well-being and a family in the midst of that, are genuinely conceivable as real people who sometimes actually do actually endure cascades of ugly life experience. Especially in a city like Chicago, a place fabled for increasingly mean streets that are sometimes compared to war zones. Note how many police officers and soldiers suffer severely from post-traumatic stress. In comparison, there are those who willfully aim to kill cops, just as soldiers at war are aimed at by foreign enemies.

In light of this, there are indeed perfect storms wherein lives spin out of control and ricochet off one breakdown after, onto and into another. If you’re a cop, you’re apt to live as a moving target for those who you may have arrested in the past, or those who were incarcerated because you were the cop who arrested them, or who you had to investigate, or it could just be someone who just plainly hates police officers—a bona fide bigotry in its own right. Not to mention that police officers are the psychic and verbal targets of people’s projections and micro-aggressions. And that is the phenomenon that playwright Keith Huff apprehends in A Steady Rain. 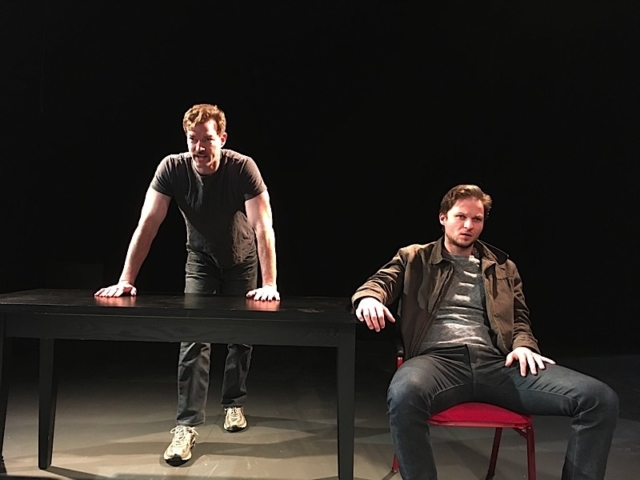 Director Ellen Fenster apprehends this as well. Moreover, she has wisely and empathically steered her splendid duo into facing the darkest sides of the characters’ souls. Fenster is a woman who doesn’t judge against this extremely layered and complex thing known as masculinity. She and her actors realize viscerally that masculinity can be monstrous, as well as filled with love and light. Hansen and Bronson reveal both. Not to mention various colors in between those polarities.

We get the sense that these men’s early lives and personality formation led them toward a more punitive outlook on the world, especially Denny. Tragically countless boys are the unwitting products, some might say, victims, of this sort of outlook—a combination of testosterone and mandated indoctrination that goes back to the hunter/gatherer roots of human existence. Theirs is a rigid, primal, and gender codified view that serves them effectively in protecting themselves and others against violence. We as citizens rely on police officers and soldiers to be the ones who will take on violence, so we can go about our regular life with security. Many take this for granted. We are the beneficiaries of their conditioning.

The downside of this for cops and soldiers is that they are compelled to continuous vigilance which can lead to a heightened sense of what can or might go wrong, not to mention skyrocketing blood pressure. If too heightened, it can undermine their navigation of basic interpersonal non-intimate relationships. And as for intimate relationships, Joey cannot seem to even find any intimacy whatsoever beyond his heterosexual male bonding with Denny. And worse still, Denny has an almost feral way of relating to others, at points to the level of psychological rabidity—some would understandably call it pathology.

However, Joey’s case changes, and for all its inner tumult, it’s ultimately for the better. Hansen numinously reveals the wrenching guilt Joey feels for connecting emotionally and sensually with Denny’s wife, Connie. But we know this is inevitable given Denny’s characteristic hyper-defensiveness and controlling personality. He drives those would love and help him away. An absolutely and totally legitimate grievance of women and non-heterosexual men who have the misfortune of loving volatile men. Tragically, the far less volatile Joey cannot access tenderness until fate puts him in a position where he is utterly compelled to comfort Connie. Out of this bittersweet miracle, he accesses his deeper humanity. It’s a rare and astounding moment in drama in which eros and love seamlessly intersect.

As for Denny, it’s as if he only has the capacity to feel when he is in a state of rage. Denny is one of those ferociously demanding roles that requires the actor to play it at an ongoing high level of intensity without alienating the audience. Bronson walks that tightrope masterfully. He’s that car wreck you can’t take your eyes off.

In redemption, for all of his corruption and explosiveness, the section where Denny rages against pimps, breathtakingly rendered by Bronson, we understand that for all his sins and double standards, this most alpha of cops, has somewhere within himself a deep core of compassion and rage toward the mercilessness of macho malevolence and social inequality—his characteristic racist slurs notwithstanding. A profound paradox indeed. It’s the likes of which we see in the ancient Greek drama of Aeschylus and Sophocles. Huff is one of the rare contemporary playwrights of whom such a comparison can be frankly and fully made. Hansen and Bronson rise to this occasion with ravaged male magnificence. They’re like fallen gods or fallen angels.

Carl Schoenborn’s lighting has a noir edge that serves the piece beautifully and simply. Katherine Horowtiz’s sound design sublimely attunes to the play’s jolting and jagged emotional currents and undercurrents. We see that A Steady Rain is a great play, and not merely a damned good vehicle for two accomplished actors. At Gremlin, we see a great production of a great play with memorable performances wrenched from the heart. It also confirms Fenster’s status as a first-rate director of American realistic drama.