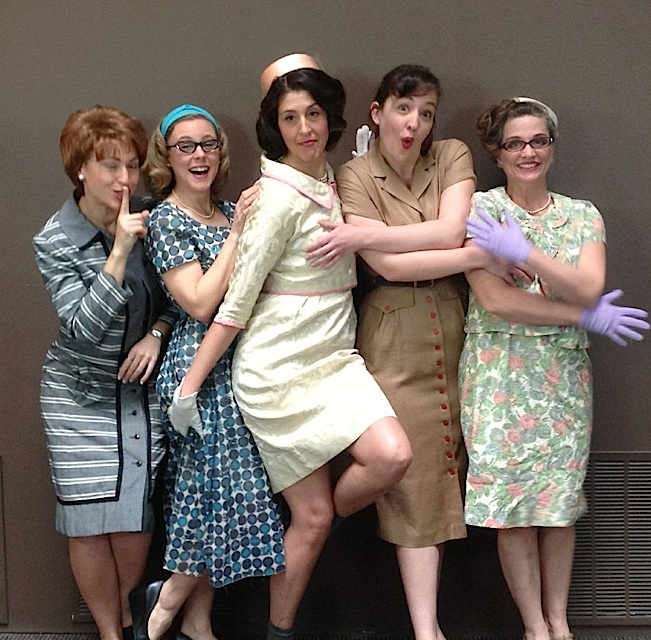 Theater NOW is offering up a delicious little comedy at Intermedia Arts, but just know it’s vegetarian. Attending Five Lesbians Eating a Quiche has the feel of being given privileged entry into an inner sanctum in 1956 where only closeted lesbians may be admitted. You are given a name tag before you enter with a traditional woman’s name on it and you may well be interacted with by a member of the Susan B. Anthony Society for the Sisters of Gertrude Stein.

Director Shelli Place and her sparkling cast have scrupulously recreated the period with attractive conservative clothing that good housewives of the Eisenhower era wore, as well as the primness and propriety one associates with the the time. That said, they also inject a crisp madcap flair that simply bedazzles.

These women worship eggs, and don’t think I’m exaggerating. Every year they have their Annual Quiche Breakfast, which is where the play is set. However, things turn perilous when an A-Bomb (as in Atomic Bomb) is dropped outside. This means they’re trapped inside and -you guessed it- they are made to face the fact that beneath the lipstick they -and we audience members too- are all lesbians.

Evan Linder and Andrew Hobgood’s script could be tossed off and still be funny, but this crackling production creates a palpable ’50s atmosphere so that you feel transported. At turns, elegantly butch, elegantly lipstick, and goody-two shoes, this is a shining acting ensemble.