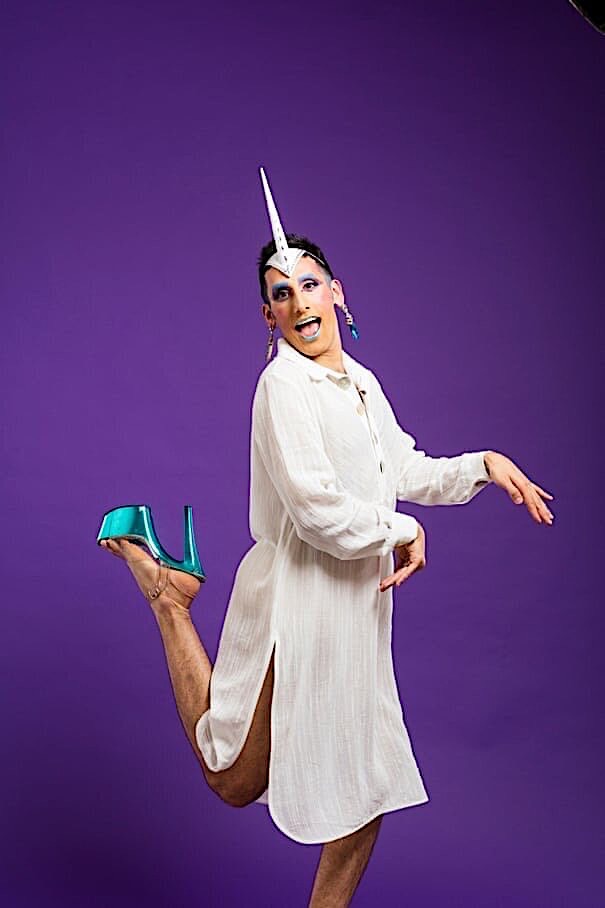 Drag performer and writer Amrou Al-Kadhi discusses their upbringing as a queer Muslim and their recent memoir “Life as a Unicorn.”

“Queer and trans people show the world what it is to be free,” says Amrou Al-Kadhi, the British-Iraqi drag queen, writer, and filmmaker.

Al-Kadhi, who recently published their first book Life as a Unicorn: A Journey from Shame to Pride and Everything in Between, grew up feeling like the only queer kid in the entire Middle East.

“I was a kid before the internet or social media was a thing, so I really had no access to queer representation,” they say. “I was taught to be very godfearing and that gender or sexual transgression was an unforgivable sin, so I suppose I was brought up with this deep, ingrained fear that my existence was an complete monstrosity, and I had no one to talk to about it or anyway in which to express myself. This deeply held fear that I am wrong in my absolute core has never really left, and I have to fight everyday to counteract it.”

“It’s been like seventeen years since then, and my parents still refuse to ever accept or talk about it,” they add.

Raised between Bahrain and Dubai, Al-Kadhi moved to London when they were eleven, and then attended Cambridge University at nineteen. Once their parents moved back to the Middle East, Al-Kadhi started doing drag and, after graduating, became a drag queen in London.

“Now I make my living as a jobbing drag performer, a screenwriter, and an author, and I recently just moved to Los Angeles,” they say.

“To be honest, I just wanted to write a book that could relay the complexity of my experiences outside of a culture war political setting,” they say. “Islam, gender identity, and queerness are so politicized these days, that I wanted to just be able to write about my experiences without anybody shouting back at me on the news.”

Al-Kadhi says they wrote Life as a Unicorn because they wanted to write a book that could “hold the complexity and contradictions of the queer Muslim experience without having to tie it into a neat narrative.”

“I guess in the end, my hope was that anybody could read this book and empathize with these experiences on a human level, outside of how politicized the issues might be,” they add.

Building empathy and community between people is something that Al-Kadhi strives for as a storyteller, “especially during this time of such pronounced polarization and division,” they say. “I wanted the book to feel like a friend was talking to you about their experiences, so no matter who you were, you could feel like you had access to the story. I also wanted to write the book I wish I had while growing up.”

“Queer and trans people show the world what it is to be free, and people who have dedicated their lives to shackling constructs that have been unquestioned feel completely threatened by this—it is our freedom that makes people hate us, and so they lash out,” Al-Kadhi says of the current anti-LGBTQ+ legislation being passed throughout the United States.

“I am so sick of our identities being used as some pawn for political gain, but queer and trans people have always been resilient, and no matter what, we will survive and thrive. And I think the curve of history is on our side—there’s nothing politicians can do to stop the new generation being more queer and more queer accepting, and no amount of legislating will change that.”

Al-Kadhi says it’s more important now than ever to fight back.

“Look how rightwing groups are trying to erase our history! The more of us who tell our stories, the more of us it will galvanize, and it is our collective strength and resilience that is going to win in the end,” they say.

Despite the ongoing setbacks and violence against the LGBTQ+ community, Al-Kadhi says they will be celebrating and honoring Pride Month this year with their friends.

“All my queer friends—they are my superheroes!”

Order a copy of Life as a Unicorn here.