Queerness, Criminality, and the Subtlety of Eros – “El Angel” produced by the Almodovar Brothers 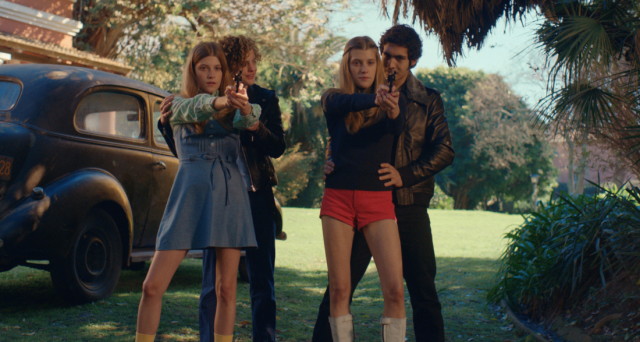 Eros permeates the world of filmmaker Luis Ortega’s beguiling El Angel (The Angel) , an uncompromising observation of the actual Argentinian teenaged serial killer and thief, Carlos Robledo Puch, who wreaked havoc in the early 1970s. He was known as The Angel of Death in the public mind and even as a pop culture hero. Legendary Spanish gay filmmaker Pedro Almodovar and his brother, Agustin, have produced Ortega’s absorbing reflection on one of Argentina’s most sensational criminals and his mostly under the radar reign of terror.

South American Ortega never overstates the grisliness gratuitously, which makes the story more effectively told and accessible to a wider audience than the Tarantinonian excess that has brainwashed Hollywood.
Early on, Carlos, played androgynously by the magnetic Lorenzo Ferro, comes on to another handsome youth, Ramon (Chino Darin), by shooting fire from a blowtorch at him. Nonetheless, soon after, Carlos is granted admission into Ramon’s professionally criminal family where the father, Jose Peralta (Daniel Fanego), hangs out at their home in boxers even when visitors drop in.
Ferro, often clad in bell bottom trousers, transfixes in the way he deceives by guilelessly exploiting his little boy blue persona with gullible women and by emanating a subtle vibe of flirtation toward older men, whether a police officer or Ramon’s professional criminal father. Carlos is one of those who, early in life, detected how humanity is comprised of a wide range that holds a broader capacity for erotic urges than conventional wisdom tells us.
In one stunning moment, cinematographer Julian Apezteguia shoots a crotch closeup of Ramon’s lecherous father Jose’s twitching testicle peeking out from a fold in his underwear. Fanego is reminiscent of one of those seedy figures akin to Lee Van Cleef who oozes with sleazy acidity in old westerns.
The parental figures of El Angel are starkly contrasted: the amoralism of the Peraltas vs. the conservative and loving Puchs. Legendary Cecilia Roth as Carlos’s mother is the very picture of a modern day long-suffering Mother Mary, with no trace of satire. Roth’s fine interior portrayal of a woman who stealthily realizes her son is monstrous is poignant. She is splendidly matched with Luis Gnecco as the father driven to despair over his son’s extreme behaviour. We witness their painful journey from blindness to dark knowledge. What’s additionally notable here is that a film infused with a queer sensibility respects, sympathizes with and values the very legitimate concerns of conservative parenting.
The perfect Mercedes Moran as Ana, Ramon’s mother, is likeably easygoing, nonjudgemental, confident, and seemingly without moral qualms about how her family maintains itself financially. But as Carlos’s compulsion to committing crimes makes her loved ones vulnerable to peril, arrest, and incarceration she shifts in consciousness.
Those familiar with the aesthetic-literary theories of lesbian Camille Paglia may recall her idea of auto-eroticism, unconsciously shimmering off a woman’s physical body. Part of Ferro’s genius is that he consciously seizes onto such a concept by applying it to his own male form. What goes one step further than Paglia’s observation is that he is fully cognizant of having apprehended that quality and he uses that to deliberately trick and deceive. Ortega has perceptively given him rein to exude this.
Carlos and Ramon are reminiscent of such romanticized criminals as Bonnie and Clyde, retold in homoromantic terms. The more hetero-inclined Ramon compares them to communism’s dynamic racist-homophobic duo, “Che and Fidel”, but Carlito subtly rebuffs the youthful stud he dotes on by comparing their relationship to “Evita and Peron”. Grand delusion indeed!
El Angel
Lagoon Cinema,  1320 Lagoon Ave., Minneapolis
(612) 823-3020
www.landmarktheatres.com