Queer as a Comic

Time for the main act: queer comedy! The Twin Cities has a bustling comedy scene, but some of the cities’ finest comedy acts come from voices that aren’t typically heard. The GLBT community presents a number of talented comics including Wendy Berkowitz, Adam DeLong, and Xochi de la Luna. Find out why these queer comedians are responsible for the outrageous LOLing.

Wendy Berkowitz always had a love for comedy. After falling in love with the comics on The Tonight Show with Johnny Carson, she knew comedy was calling her name. Though she never found time for her passion while working a nine-to-five job, the comedy gods shed their light on Berkowitz, and she took the stage at an open mic night soon after retiring.

As a lesbian, Berkowitz says she doesn’t think there is a huge presence of the GLBT community in the comedy world, but not because it isn’t being represented.

“You don’t see many LGBTQA shows in the cities other than around Pride and a few others. I like to think that there are comedians that are LGBTQA, rather than we have our own comedy scene,” Berkowitz says.

When Berkowitz first began doing stand-up, she wasn’t openly out, and she says it made it impossible for her routines to be authentic because many of her jokes involve her life and dating. Now that she openly identifies as lesbian, she says she’s unsure whether her identity in the GLBT community has given her career a leg up.

Berkowitz runs a show at Wayzata Brew Works called Odd Thursday Comedy Showcase every first and third Thursday of the month, including a bonus show if there is a fifth Thursday. She says she also hits several open mic nights around the Twin Cities. 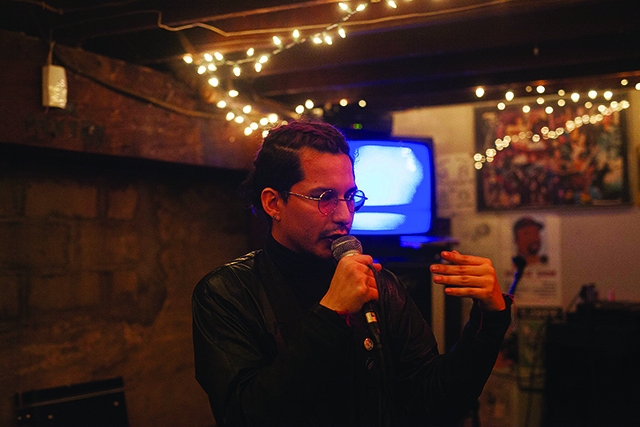 “Like most comedians, my goal is to get funnier, but I also have a goal to help others improve and get paid,” Berkowitz says. “People can’t pay for their groceries with drink tickets.”

Like Berkowitz, Adam DeLong says comedy always had a strong presence in his life. To escape the frequent bullying he faced as a child, DeLong turned to comedy.

“Television and comedy were totally the escape until I came out of the awkward childhood/teenager shell and blossomed into the awkward early-to-mid-20s phase… yeah, that awkward is just there to stay,” DeLong says. “I started doing stand-up in the Twin Cities with the Funniest Person Competition at Acme and a few open mic nights here and there about seven or eight years ago.”

Back then, DeLong says there weren’t nearly as many comedy nights around the cities as there are now, and as a bartender at the time, he often worked nights, which is when the few open mic nights obviously took place.

While the comedy scene has definitely reached an uprising over the years, DeLong says the GLBT presence in the comedy world has also experienced some uptick.

“We have members of our community taking to stages that they have made their own, performing and hosting in totally different venues aiming to make any and everyone who attend our shows feel welcome, comfortable, and ready to laugh,” he says.

As for his material, DeLong uses his status as a gay—and dating—man for many of his jokes.

“We’ve all been on Grindr/Scruff/Tinder/Jack’d/A4A etc. here in the cities… where the hell do you think I get half my act?!” he jokes.

He says many faces in the crowd belong to family members and friends, so he always feels comfortable being his authentic self in any way he chooses.

“I think with the shit that most of us go through in our adolescence, with figuring out who we are and coming out, gives us a good edge on dealing with tough things or looking at life in a different perspective,” DeLong says.

Unlike DeLong and Berkowitz, Xochi de la Luna says they first got into comedy on a whim in 2016. After performing their first set at Acme’s open mic night, de la Luna continued to other locations in the Twin Cities comedy circuit until they started booking their own gigs.

“Just like white dudes with beards and beer bellies base a lot of their jokes on that experience, I have a lot of jokes that touch on my immigrant upbringing, my experiences as an agender trans person, and, of course, my life while being queer,” they say. “A lot of these identities cause all sorts of funny interactions with folks because they aren’t the norm of this white cis-hetero patriarchal society.”

While there is more GLBT representation in the comedy circuit than ever before, de la Luna points out that, since they greatly remain the minority, many GLBT comics feel unable to fully express their identities while performing.

“A lot of LGBTQ comedians I’ve met, especially if they aren’t men, don’t tend to focus a lot on gay jokes. Still, I feel like we’re all a little more conscious about owning up to our words on and off stage,” they say.

de la Luna performs at Pangea World Theater once every other month beginning February 9 and at Moon Palace Books every third Friday of the month.