Queen of the River 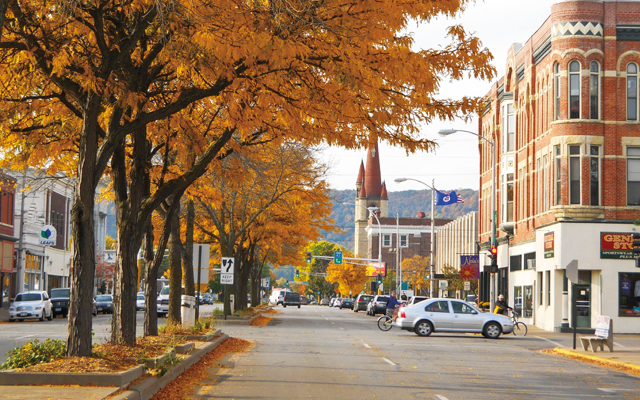 Jane Swenson is not smiling. Her photo in the Winona County History Center is all that remains of the town’s first white settler, who landed among the Dakotas in 1838 and bid adieu the very next year. Impatient, maybe.

By 1853 the town had grown to 300 citizens. They flourished so well on this sandbar “island” on the Mississippi that they engineered a treaty to push the Dakotas further west.

Wheat and lumber fueled the golden years of 1870-90. Third Street’s grand brick and stone buildings, erected by those fortunes, plus the cultural vibe of three colleges and the drop-dead beauty of forested bluffs along the mighty river, constitute the trifecta that provides the town’s eye candy, both natural and man-made.

One of those early arrivals was J.R. Watkins, who relocated his now-worldwide spice and potion empire here. Tour the shop-cum-museum—you’ll spot its white tower from anywhere in town—to ogle its line of products, from ointments and complexion powders to (who knew?) chewing gum, coffee, and, of course, all those exotic flavorings salesmen used to peddle house-to-house. (Their carts are on view, too.)

An overnight at the Alexander House B&B—a gorgeous Queen Anne extravaganza once owned by J.R.’s family, continues the Watkins saga via lotions in the marble bathrooms and cinnamon in the breakfast coffeecake.

Watkins’ son in law became president of Winona National Bank, whose grand Egyptian Revival quarters he built in 1915, calling on Tiffany to fashion the magnificent stained glass windows that still enchant visitors today. Close by, rival Merchants Bank boasts jaw-dropping stained glass of its own, plus a 1915 cityscape mural shining behind the tellers’ desks—showpiece of the muscular, Prairie-style edifice of Purcell & Elmslie design in the style of their mentor, Frank Lloyd Wright.

Continue your wander on a self-guided tour (phone app available) of this seven-block stretch preserved on the National Historic Register, careening from Italianate columns and Queen Anne curlicues to the Romanesque Revival which makes the city water works look like a lord’s castle.

Watkins’ story gains momentum at the History Center, aka the 1915 Armory, loaded with artifacts ranging from the prehistoric skull of a saber-tooth cat to Watkins’ daughter’s fancy carriage and, indeed, the natty white linen suit that he Himself flaunted. A timeline weaves visitors through intricate Dakota bead and quill embroidery, through Civil War regalia and a wooden “Lincoln voting box,” on to a reconstructed Main Street: with relics of the Roaring Twenties from this, “the wettest town in the Northwest,” and a World War II barbershop, complete with blackout instructions. 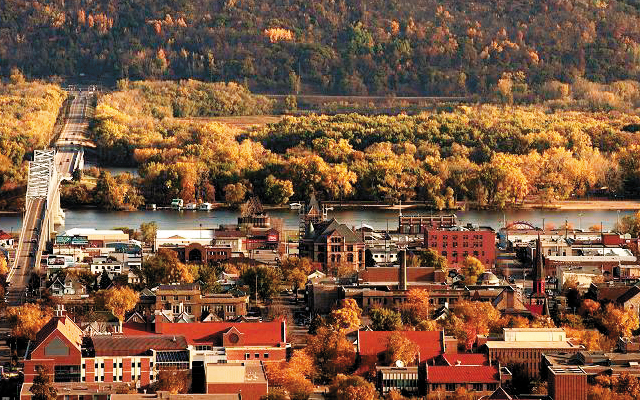 Folks from as far away as Poland heard there were jobs here in the land of wheat and lumber and arrived, 6,000 strong, in the 1890s. There’s a sprawling Polish Museum to prove it, with displays of treasures from the Old Country, from intricate embroidered waistcoats to wedding dresses and Poland’s signature pottery, also on sale in the gift shop. Photo murals capture faces happier than Jane Stevens’, lined up for confirmation class or high school graduation. You’ll get the whole story from Father Breza, a retired priest who sits visitors down, then steers them to the vista of St. Stanislaus, of 1895, all gilt and shining domes.

But the museum the city is most proud of showcases Minnesota Marine Art, anchoring a pretty terrace on the riverfront, where it celebrates Dutch and American paintings of ships and their captains; Audubon’s waterbirds; the dreamy landscapes of the Hudson River Valley painters; and a permanent collection, unique in a town of 28,000, that segues from Renoir and Monet to Van Gogh and O’Keeffe. 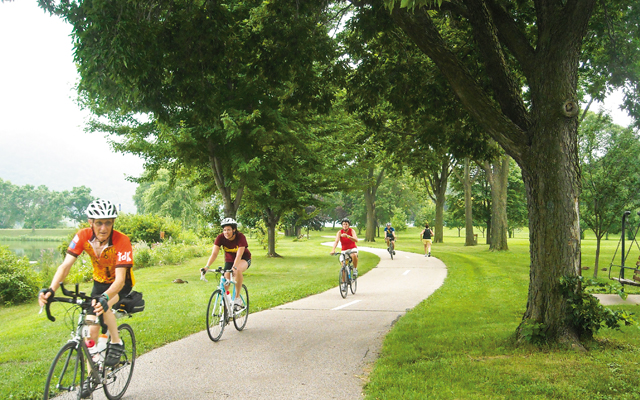 That includes the bookstore adjoining the sweet little Blue Heron Café, source of homespun eats like a Greek salad blooming with feta and olives, and the best-selling egg salad sandwich. For dinner, the signature destination is Signatures, anchoring the greens of a golf course hidden amongst the forest firs. First, gawk at the owners’ collection of items and autographs (signatures: Get it?) worthy of a Sotheby’s auction, including Fred Astaire’s umbrella, Bill Clinton’s saxophone, Bob Dylan’s harmonica, and signed album covers by everybody from The Beatles to Jerry Lee Lewis. You could dine on pork and beans and still be mesmerized, but fortunately, the menu also is worth the drive—locally sourced and creatively conceived wonders like walleye cakes plumped with wild rice and sweet corn with roasted red pepper-truffle aioli, or mussels in coconut milk and lime broth afloat with kimchee-stuffed ravioli.

Prefer dining in your jeans? Jefferson Pub & Grill, rising from the levee, is the answer. What to drink? A Brandy Old Fashioned, instructs the host, explaining, “Wisconsin [nation’s largest brandy consumers] is just across the river.” Perfect with a burger or a garlic steak. 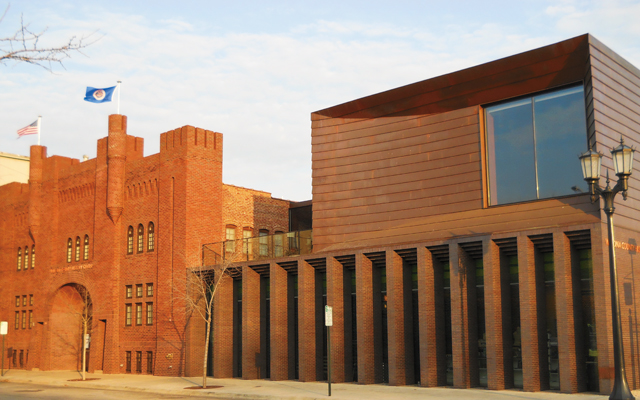 Winona’s oldest dining op is the classic Lakeside Drive-In, hauling victuals to your car (“Blink your lights”) or umbrella table since 1938. Prices haven’t changed much since then—three bucks buys you a burger and fries—but menu options have, including a tasty bison burger, sweet potato fries and even a grilled mahi sandwich among the chicken baskets. Don’t miss the homemade root beer.

Then cross the street to the endless park shouldering the city’s other watery idol, Lake Winona. Rock in the romantic swings for two, catch a free concert at the bandshell, or head to the lodge for free rental of canoes and bikes, or in wintertime, cross-country skis and skates. Or stroll the levee, counting soaring eagles and low-slung barges muscling down the river before it’s time to hit the highway once again.