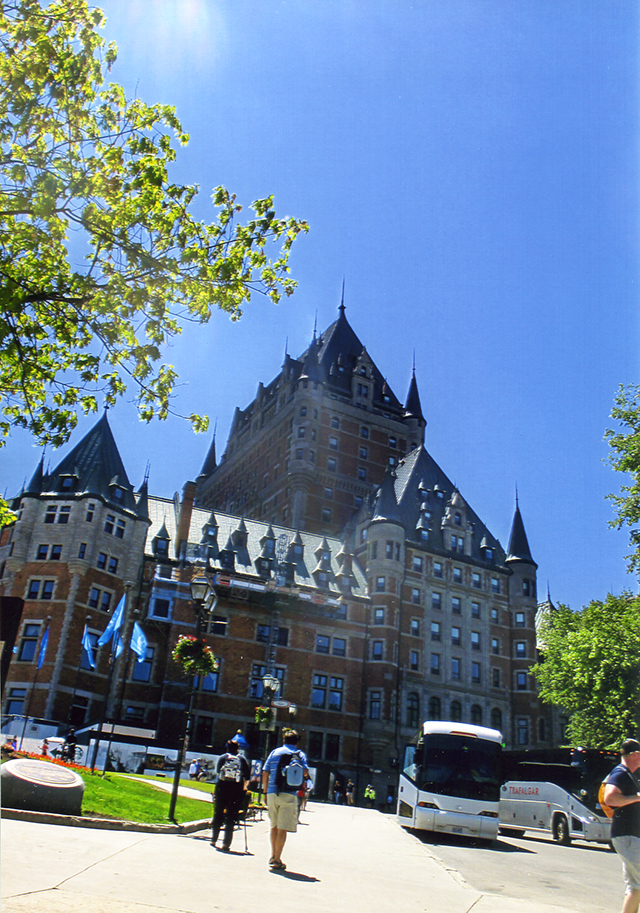 The fairytale-like Chateau Frontenac dominates the landscape in Quebec City.

Montreal, the second-largest French-speaking city in the world (following—duh—Paris), blossomed along the banks of the St. Lawrence River, where French voyageur Jacques Cartier first beached his boat in 1535. His home still anchors the waterfront, aside a tiny 17th-century sailors’ church. For decades—centuries!—the Old Port he founded, and the antique limestone mansions that came later, served as the economic and social hub of the city. Then they became souvenir shops, galleries and wine bars as the area morphed into a tourist magnet.

The scene’s as alluring as ever, of course, but today’s experiential visitors are seeking more. They’re flocking into the city’s “undiscovered” neighborhoods, where life is lived sans tour buses; where indie shops prevail; where restaurants are crammed with locals, not followers of celebrity chefs. Thus the new Alt Hotel, just a 20-minute stroll southwest of the harbor and hemmed by the muscular Laurentian Canal, has instantly gained identity as a hipsters’ mecca. Its bubbly GM, Julie, comes to work in jeans.

In the Griffintown neighborhood it anchors, condos are rising on once-gritty streets. But you’re not too late to savor this real-time neck of the woods before, inevitably, it gentrifies. Catch the on-the-cusp vibe in vintage shops, salons, bars and hole-in-the-wall eateries of many persuasions, overseen by splashy murals.

They’re at home along the artery called Notre Dame West. Follow it further west to the bustling Atwater Market of 1938, built to serve the working-class Irish in nearby tenements. Today its rainbow of pristine products ranges from sweet shellfish to juicy apples, from savory charcuterie to fancy chocolates. Don’t miss the bakery with its attached café. 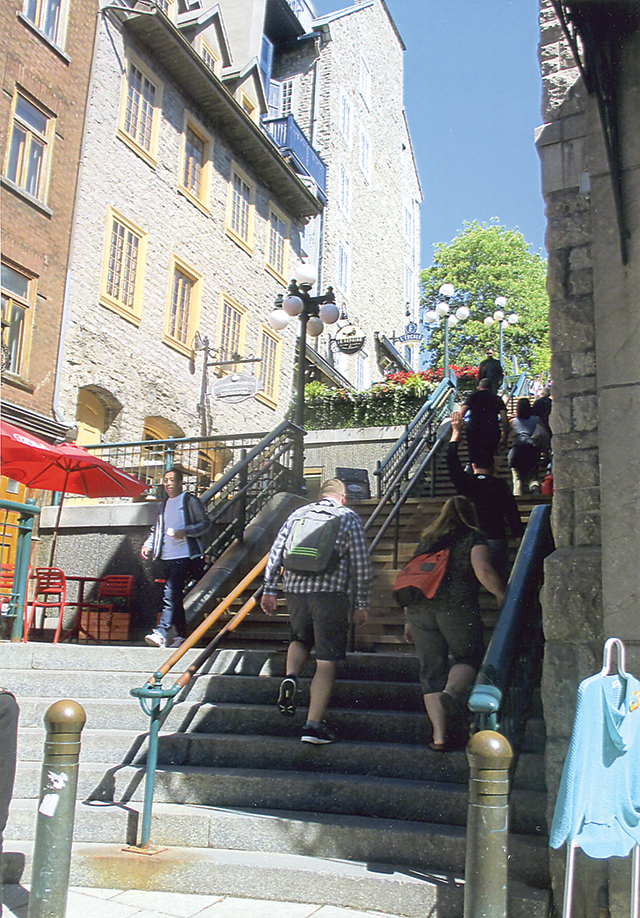 The oldest stairway in Quebec City, the Breakneck Stairs are a popular attraction for visitors and residents alike.

Outside, pause at the canal to ogle (or rent) beached paddleboats, or hop into an actual boat called the Canal Lounge for coffee or sip of wine. Across the street, Foigwa (pronounce it and you’ll recognize a menu highlight) is doing a brisk brunch business in Benedicts, chicken & waffles and ricotta pancakes.

Another day we head across town to the equally blue-collar (and venerable) Jean Talon Market, a standby of Little Italy, where a good share of its 150 producers offer All Things Maple: syrup, sugar, candy. Here we join a Spade & Palacio food tour to fashion a hearty lunch of samples at half a dozen stops, including—in the market itself—cured meats (sausage to prosciutto-like ham), cheeses both sharp with age and young and creamy; and homemade ice cream (think pear-maple-whiskey).

Next, we follow its local Latin neighbors to Los Planes to gorge on Salvadorian pupas (cornmeal pancakes stuffed with beans and cheese topped with cabbage salad and spritzed with tomato sauce). There’s Belgian-style beer and a Blanc Ale waiting for us at Brasserie Harricana, owned by a femme basketball star, followed by cold-press coffee as Dispatch Roastery (neighbor to Manitoba, a bistro celebrating the fare of Canada’s First Nations: seal, anyone?).

The tour’s pinnacle is a picnic in Petite Italie Park, where a checkered tablecloth disappears under platters of specialties gleaned from the American South: fried chicken, hush puppies, mac & cheese and more, courtesy of Dinette Triple Crown, which gladly loads up picnic baskets for visitors to borrow. 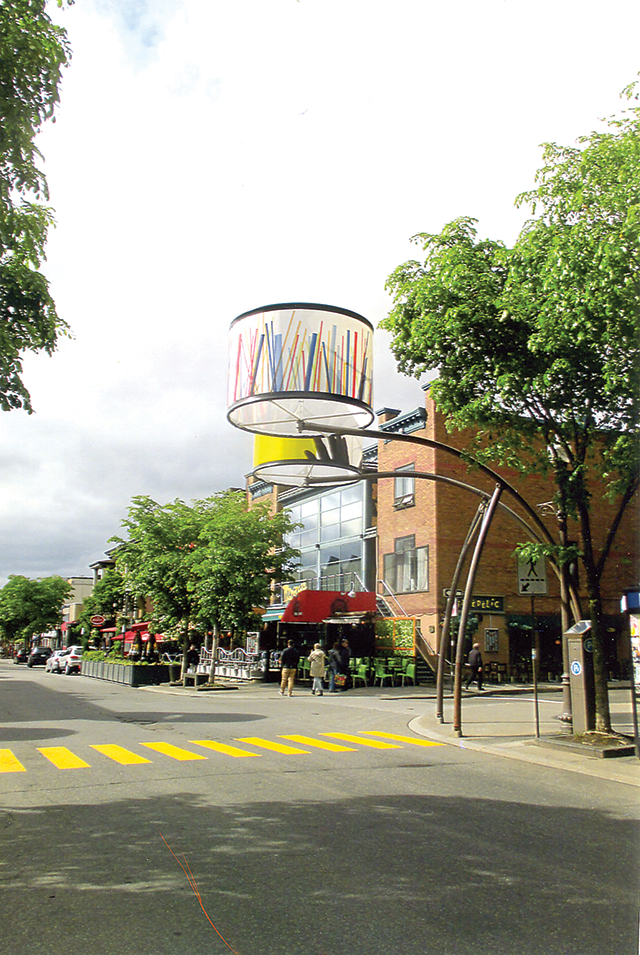 Somehow, we’re hungry again by dinnertime. We tramp to Foxy back in Griffintown to share wood-roasted apps like lobster with smoked jalapeno butter; lamb tartare studded with pine nuts and pecorino; and shrimp in green mole. Next, charcoal-grilled trout, honey and mustard sausages, baby chicken or hanger steak.

Then it’s on to Jardins Garrelin, a new block-long festival park that arose from a dicey urban stretch, reborn as a vibrant hangout for after-work happy hour, Sunday brunch and everything in between: food and drink stands, a stage hosting free performances, and green gardens.

Close by beckons the Village (a.k.a. Boys Town), where, summer evenings, St. Catherine Street is reserved for pedestrians to promenade under a canopy of tennis-ball-size colored lights that form the Pride flag. By the way, Montreal’s beyond-exuberant Pride Festival occurs in August in order not to compete with the customary June dates. To plan your stay, visit Tourisme Montreal at www.mtl.org/en.

Quebec City, three hours’ distant by bus or train, is about as close as you can get to the Old World in the New World. French is the native language of nearly all its inhabitants, since the days when explorers like Champlain erected a fort-like trading post on what’s now Lower Town’s prime gathering spot, Place Royale.

It’s reached from atop a huge cliff by means of—fair warning—Breakneck Stairs; or, today, a less lethal funicular beside the fairytale Chateau Frontenac, whose rooms have hosted the globe’s political leaders and bold-name celebs. Down below, the Museum of Civilization recounts in lively fashion the province’s volatile history, from when loyalists fled here during the Revolutionary War to arrival of impoverished European immigrants, followed by the Francophones’ opposition to the two world wars and the ensuring Separatist Movement against the capitol in Ottawa. The town remains the only walled city on our continent. 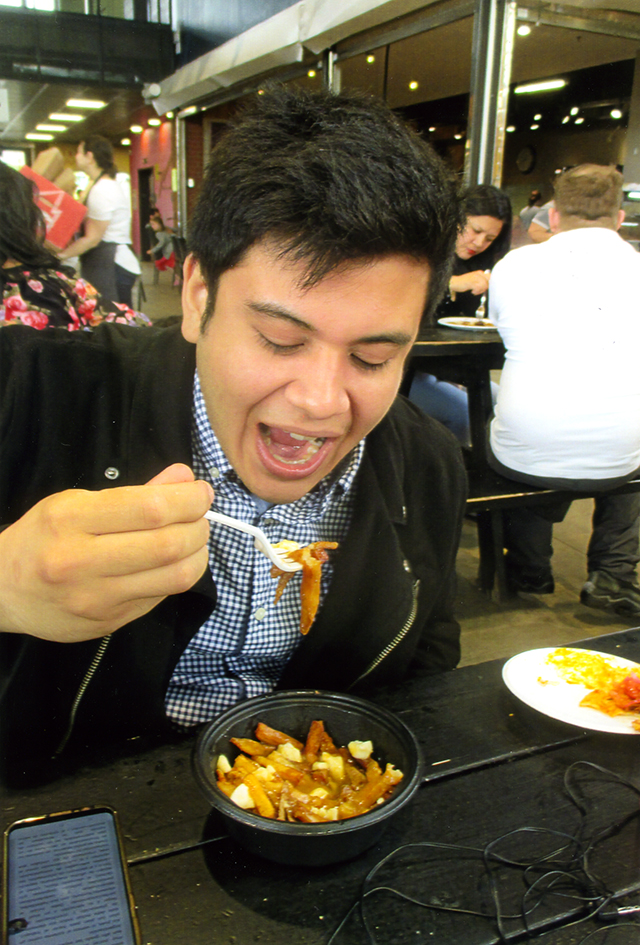 If you head to Montreal, you’d do best to put poutine on your food wish list.

But these days, newly-hot neighborhoods outside those muscled walls are earning visitors’ attention, too. Our trendy hotel, the 3C Art de Vivre (you’ll spot it by the lifesize metal horse out front) faces the Grande Allee—the Champs d’Elyssees of the city. It stares at the Musee de Quebec, a treasury of art, whose new expansion celebrates outstanding Quebecois artists of today, plus a gallery of contempo decorative arts (including lamps fashioned from Tupperware) and an artist’s version of shoes, featuring a pointed-toe model “designed for kicking ass.”

Behind the 3C, Avenue Cartier, hung with lanterns that resemble oversize lampshades, stretches Boulevard Rene Levesque’s quirky mix of indie boutiques, wine bars and cafes. Or venture a bit farther to the Old Limoilou District to dine at ARVI—a chef-driven storefront whose set menu begins with foie gras on homemade brioche, continues through asparagus with grapefruit (!), veal with cheddar (!!) and more, climaxing in a dessert of maple, coconut foam and bacon. The spot-on wine pairings are just as off-center.