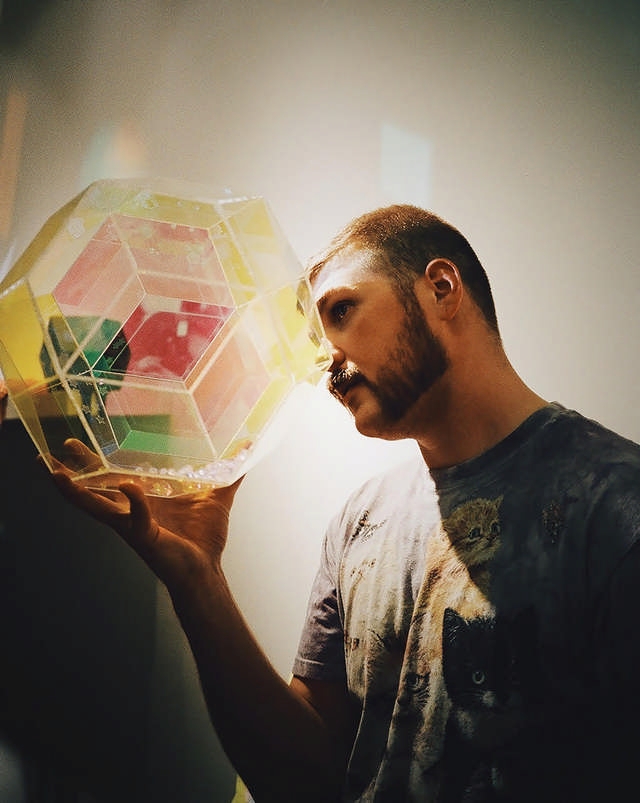 John Foster, a queer artist and MCAD alum, will be featured in his first solo exhibition “Shimmer” at Gamut Gallery in Minneapolis. The exhibition, from June 29 to August 15, will be just in time for Pride Season. Photo courtesy of John Foster

“It’s like a unicorn hitting the cosmos. His work is pure joy. You can’t look at his pieces and not smile,” said Cassie Garner, director of Gamut Gallery in Minneapolis. She is describing the latest exhibition at the Gallery, the first solo exhibition of queer artist John Foster. Titled “Shimmer”, the work is the intersection of a multitude of influences, merging sculpture and geometry with light, motion and time (inspired by experimentation with long-exposure photography) to create a sense of the otherworldly.

Foster, a California transplant, considers the exhibition in Minneapolis to be a homecoming of sorts. He moved here at age 19, after coming out, to escape the homophobia of his Central Valley town and Catholic school.

He enrolled in the Minneapolis College of Art and Design (MCAD), initially with an interest in graphic design, but quickly became enamored with the creative, visual and tactile possibilities of three-dimensional art.

“I saw the 3D shop and got a glimpse of the freedom there. And during my time [at MCAD], I lived in a house with anarchist strippers and rappers. I developed a life and a practice of making things, bringing beautiful objects into the world,” Foster said.

The geodesic acrylic sculptures of Foster’s unique style began as a project in his final year of MCAD. Previously, he had been making silicon work, collaborating with Smitten Kitten in workshops for participants to craft their own custom sex toys. The concept of a pedestal arose as a means to display his earlier work.

In the final design, two circular layers of glass table are supported by a column of multifaceted, iridescent three-dimensional shapes clustering together to reflect technicolored light on all surrounding surfaces. Photos of the end result—picture a psychedelic Spirograph, or a beehive on LSD—went viral, bring him Instagram fame and a shout-out from British street artist Banksy.

Foster’s work is difficult to pin down, both literally and figuratively, as a form of kaleidoscopic sculpture.

“It’s an interdisciplinary art practice using time, space, light and materials to create a moment,” said the artist himself. 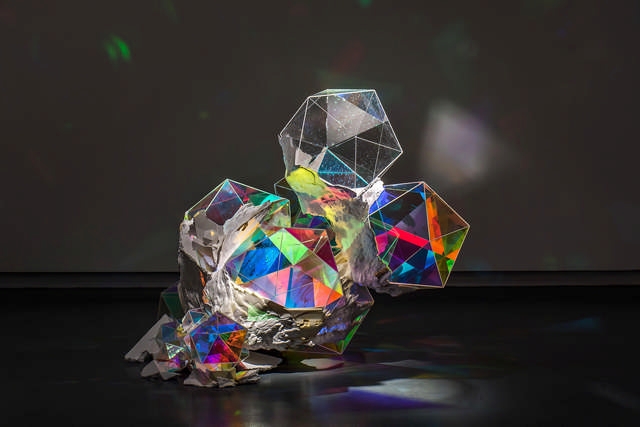 His identity within the work is equally elusive but ever-present. Initially, Foster made an obvious homage to his queer identity through a polyhedron of pink triangles, “a literal representation of queer space.” He said that often, however, queerness is a subtler theme in his work.

“It’s like your fingerprint. Who you are will always show up in what you make. I can’t escape that, it’s just how it is,” Foster said.

Foster has described his work as “inter-dimensional quilting”, conscious of the fact that quilting is traditionally considered a feminized craft. In this way, Foster’s work plays with the concept of gendered objects and art, merging domestic space with quantum physics.

“I’m a big fan of the everyday, the beauty found in the sink while you’re washing dishes, the light and patterns reflecting off of soap bubbles, the reminders of things that are bigger than ourselves.” Foster said. “Queerness belongs to the domain of the future. It’s always looking on to some quasi-utopian existence. My goal is to bring a glimpse or a glimmer of that utopian moment by creating literal space that reflects that sense of the infinite.” 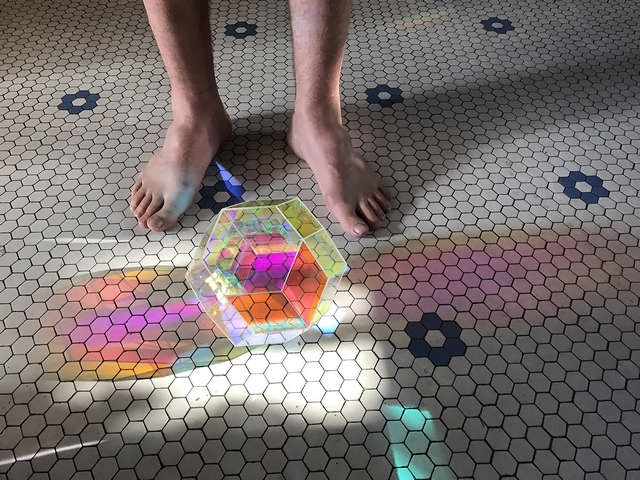 This spectacular aesthetic has built Foster an Instagram following more than 36,000 strong. Now, audiences will have the chance to see this for themselves IRL as Foster’s work will be exhibited in his first-ever solo show at Gamut Gallery, with whom he has previously collaborated in a multi-artist show called “Brightside”.

“This (is) giving us an amazing opportunity, to work with someone of his caliber. It feels like bringing a local back home,” said Garner, a longtime friend of Foster’s.

The show intersects with Minneapolis Pride, a fact that Foster appreciates but also emphasizes that the work is meant for and accessible to everyone.

“I want you to leave the show feeling like you just ate a whole bunch of candy,” he added. “It’s the same as what you want people to take away from Pride season. This feeling of celebration of our existence, acknowledging the infinite, this possibility of a more colorful situation.”

The “Shimmer” exhibition runs from June 29 to Aug. 15, with special events on the opening and closing days and an artist talk July 13.