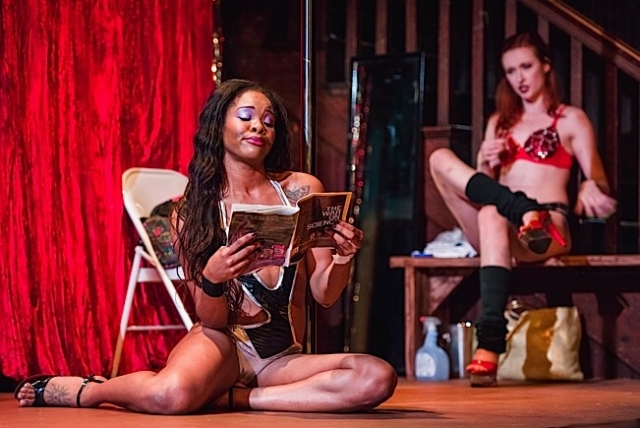 Playwright Katori Hall boldly defies entrenched politically correctness, as well as puritanically conservative conclusions. She challenges views of the female body and definitions of victimhood. Though the majority of the characters in her new play, Pussy Valley, are struggling African American women, it lives beyond the category of “identity politics”. The setting is the Pink Pony, a club on the Mississippi Delta where three black women and one white woman make an honest living as talented and arduously hard-working pole dancers. Their boss, Uncle Clifford, is a man who gender-presents as female.

This remarkable work and its wonderful Mixed Blood Theatre production directed by Nataki Garrett pushes buttons galore and will shut off many audience members because of its graphic honesty. Though there is shock value in Hall’s approach, it is an organic part of the situations she sets up.

The use of the N-word and the B-word permeates the entire play and is jolting for many people watching it, especially as those words are continuously used by the female characters. Most audience members will see the use of those terms as wrong, racist, and misogynist. Others will think they are reclaiming a bigoted to term to empower the group the term refers to. Others will see it as an accurate reflection of a time and place and won’t or will moralize over it.

The men in the play are clearly more dysfunctional than the women but Hall doesn’t seem to have a feminist axe to grind as much as her women are realistic and innately powerful. The men, white and black, have been more emotionally stunted than the women. But as awful as what some of the dancers endure, they are luminous figures.

One dancer befalls a horrible tragedy at the hands of a man. The others are thwarted constantly by the system and by men, yet they never lose their souls. They are resilient and dare I say, uplifting. 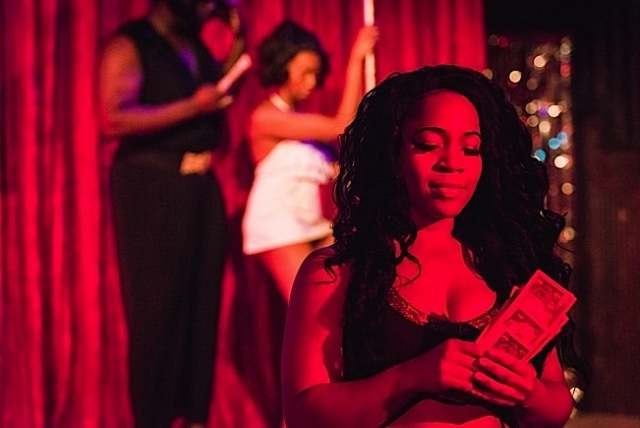 Hall brings in an engaging subplot about socio-economic hierarchy among blacks and an enraged one about Christian fanaticism among black folks. One character has a preacher father who extorts her earnings for his church. Hall also keeps us routing for, yet questioning Uncle Clifford for his management style. Is he exploiting the women or is it imperative for the business’s survival that he takes big cuts from the tips they work for?

There is also a contrast where it’s deemed cool for a woman to be attracted to a woman in the eyes of a man. She still maintains her femininity. However, at one point the white dancer makes it known that she thinks if a guy has sex with a guy then he is more gay than straight and the implication is that he is less than a man. A scene where a down low black man is caught being blown by Uncle Clifford is frighteningly real as he acts as if his life is irreparably ruined.

Hall’s text has been vivified by four splendid core performances by Tatiana Williams, Megan Rippey, Jasmine Hughes, and Joetta Wright. Their pole dancing choreographed by Jac Fatale is gorgeously rendered. Nicco Annan’s Uncle Clifford is crackling, saucy, and a joy to watch. Darrick Mosley, Mikel Sapp, Dustin Bronson, Ansa Akyea, and James Craven are all searing as men who too are trapped in gender traditions, racial categories both white and black, and economic duress. In sum, Hall’s is a wise, unique, and enthralling overview.