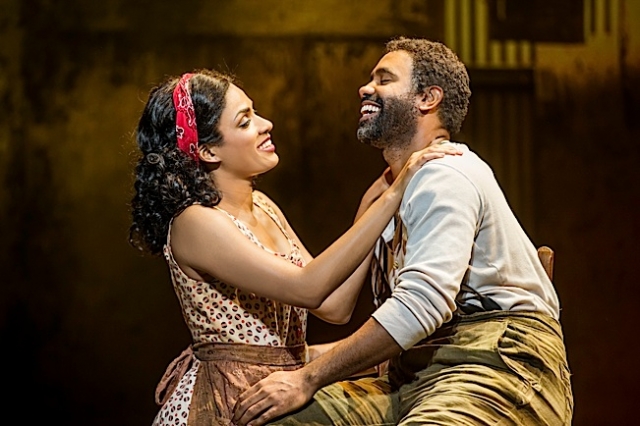 Alicia Hall Moran as Bess and Nathaniel Stampley as Porgy in The Gershwins’ Porgy and Bess. Photo by Michael J. Lutch.

Playwright Suzan-Lori Parks is known for her gritty dramatic style. So if anyone is just the right candidate to revise the most performed American opera ever, then she’s the one. And she has. And she has triumphed. Thanks to Parks and music adaptor Diedre L. Murray, the sumptuous George Gershwin score and the gist of Ira Gershwin’s lyrics are in glorious evidence in the national tour of the Tony-winning revival at the Ordway.

The setting is still the all-black Catfish Row neighborhood in Charleston, South Carolina in the 1930s. It’s all the same story and character relationships. You’ll see a bit more coke-snorting and raw sexual energy than perhaps most previous productions. But it’s totally in the groove of what the Gershwins and DuBose and Dorothy Heyward put forth. The Heywards were the white couple who wrote the play, Porgy, from which the opera, now a musical, is based. Moreover, that play was based on a novel by DuBose.

Porgy and Bess has been a lightning rod because its originators were white and its first musical adaptors were Jewish. Nonetheless, the score has had a long history of belovedness in black communities.  Countless great black singers have sung its famous tunes: Summertime, I Got Plenty of Nothing, It Ain’t Necessarily So, just to name a few.

At the Ordway all the songs are given astounding renditions by a cast that is beyond comparison.  There are more glorious soprano moments in this production than I may have ever experienced in all my nearly two decades of reviewing. Alicia Hall Moran’s Bess, aside from its superlative vocals creates a searing study of a woman dominated by the physically powerful Crown, a man who brutally overpowers her. The physically disabled Porgy is her lifeline. It only fueled my outrage that someone of Moran’s caliber was not selected to sing The National Anthem rather than the tepid Beyonce at the last Obama inaugural.

Nathaniel Stampley’s Porgy is transcendent. Alvin Crawford’s Crown is a force of nature.  Sumayya Ali, Danielle Lee Greaves, Denisha Ballew, and Sarita Rachelle Lilly (all of whom should also have been considered over Beyonce) add support that is nothing short of celestial. Kingsley Leggs as Sporting Life is consummately devilish. The entire ensemble embodies the very essence of an actual community.

Diane Paulus’s direction is superb on multiple levels but perhaps her greatest achievement is how we come to care so very deeply for these characters right off the bat and continually as we audience members flow into the depths of this landmark production. Willaim David Brohn and Christopher Jahnke’s orchestrations are resplendently realized by a live orchestra that gets the style and its nuance to mesmerizing effect. Ronald K. Brown’s choreography combined with ESosa’s costumes make for a heavenly vision of people rising above their dreary circumstances.

Moreover, the musical’s Christianity is never cloying and is clearly Christlike as opposed to Calvinistic or judgemental. One thinks of it as the Jewish Gershwins’ appreciation of positive aspects of Christianity rather than the anti-semitic war-bent Christianity that was emerging in Europe when they were creating the original in the 1930s. Christianity is shown as lovingly organic to the survival mechanism of Catfish Row. When Jesus is called upon, it is felt, rather than a religious point to be made. And of course Catfish Row would have been profoundly Christian. African Americans after Reconstruction saw church and community as foundations on which to stand. That’s just the way it was.

Comment from the excellent Kent Overshown who plays Mingo  in Porgy and Bess:

“I believe this revival is special because instead of the focus being on spectacle and stereotypical characters, it really pares things down and puts a microscope on this community of people. I feel this particular production extends to a wider audience and pulls them in a bit closer to the humanity of this piece. I play Mingo, the Undertaker, who is an integral part of the community. He faces a tough decision between his need to make a living and burying a departed friend.”