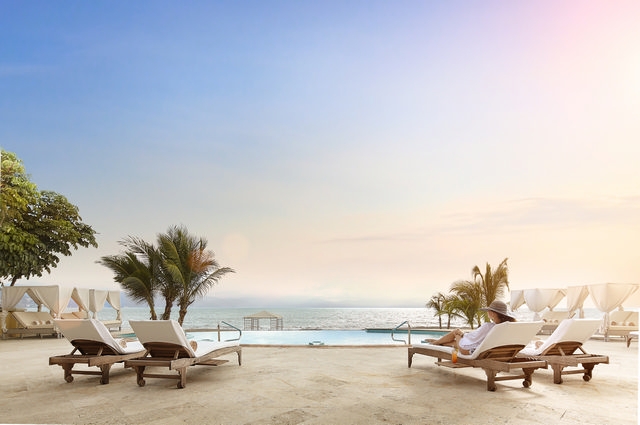 A stay in Puerto Vallarta guarantees a picture-perfect view.

Pray that a tsunami never hits Puerto Vallarta, the beach playground on the Pacific Ocean’s coast. It would deprive us of Mexico’s premier gay destination.

While you may spot stray straight folks wandering the oceanside Malecon promenade, they’re probably Canadian and didn’t get the memo. The city’s won the informal title as the San Francisco of Mexico, but here the weather’s better and the prices far less punishing. Gay Pride, established in 2013, occurs Memorial Day weekend, but gay tourism is hot-hot-hot all year ’round, with scads of dedicated bars, nightclubs, saunas and hotels, although the entire city—especially the Zona Romantica, anchored by the gay beach Los Muertos—is mucho friendly. And packing’s easy. You won’t need much more than a Speedo.

The city was pretty much of a tourist nothing before Liz Taylor and Richard Burton camped out here while filming The Night of the Iguana in the 1960s. (Co-star Ava Gardner made her share of headlines in the gossip columns, too.)

Since then, tourism has become the town’s main industry, so English is spoken everywhere. And we never met a crabby Mexican. The only bit of snark we encountered were the spot-on t-shirts declaring we were on “the fun side of the wall.” No lie. 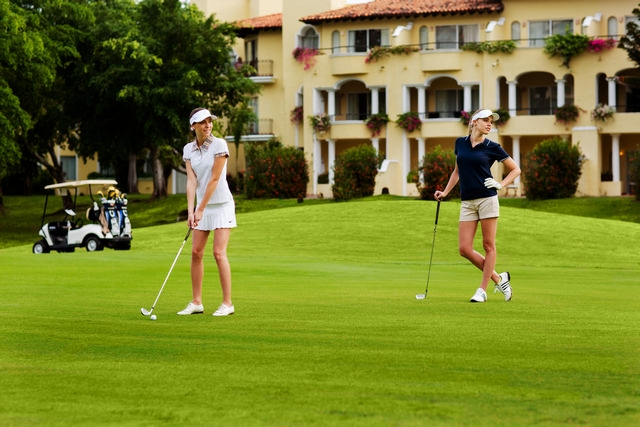 Casa Velas is a lush, all-inclusive resort in Puerto Vallarta, complete with a golf course.

What to do here? Well, not much except relax. No starchy museums to check off your list. No theater to speak of, nor “formal” concerts. Instead, It’s vivid mariachi bands and the performance art enacted spontaneously by locals along the Malecon—the best of which is the ritual Saturday night promenade, when Mexican families descend in three generations to stroll aside the sea and stop at food stalls for cups of corn kernels slathered with chilies and mayo or skewers of barbecued shrimp on a stick.

Open-air restaurants bordering the wide, wide boardwalk specialize in seafood. And margaritas. And cervezas. Midway in your stroll along the mile-long Malecon, you can spot Puerto Vallarta’s iconic city symbol, the charming church of Our Lady of Guadaloupe, all sparkling white and gleaming gold, rising to a steeple topped with a huge silver crown.

Puerto Vallarta boasts the cleanest beaches in all Mexico, and all along the Malecon they beckon. Or turn away from the ocean and follow the paved path alongside the river that runs up into the mountains through lush jungle greenery, a stroll along what’s known as Gringo Gulch. Along the way, pause at a taco truck ($1 each, big spenders!). Join the crowd seated curbside on little plastic stools, grab a napkin, and layer on the salsa.

Or meander to the cluster of art galleries that line Guadaloupe Sanchez Street, parallel to the waterfront, for window-shopping (art crawls Wednesday evenings). The so-called crafts markets all sell identical tacky trinkets, most likely made in China. 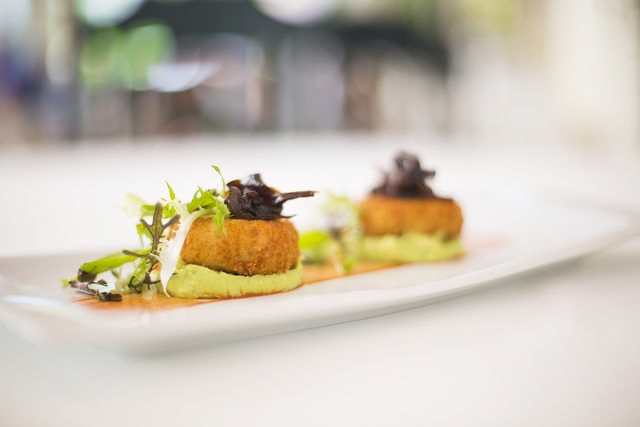 Puerto Vallarta is a hotbed of amazing, exquisite cuisine.

We divided our visit between two versions of the city, staying for a couple of nights right in the heart of the Zona Romantica, walking the (safe, clean) streets to gape at the local boutiques and dine in small, sweet informal cafes like Mole de Jovita, offering tastes of its three mole sauces—chocolate, green and yellow—before ordering. We chose the touristy—and delicious—combination plates featuring the line-up of typical fare you’d find on a Mexican menu here at home—enchiladas, tacos, tamales—but worlds better, fueled by a margarita that’s pure alcohol, only briefly visited by lime.

We indulged in fresh seafood at Martini en Fuego, where the owner brought out complimentary starters and unordered gifts of Caesar salad, plus shots of mescal before we departed, stuffed with guac, shrimp and sea bass. Each morning we elbowed through the crowds at Fredy’s Tucan for our fix of fruit plate (fresh watermelon, cantaloupe, pineapple and papaya, abetted by a squirt of lime) followed by chiles rellenos or huevos rancheros, complete with steaming tortillas, all delivered by what’s probably the world’s most friendly and attentive staff.

But we discovered the shrimp burrito of our dreams at the resort where we’d started our trip. Casa Velas is a beyond-lovely paradise—picture a lush jungle carved out to embrace a hacienda of 80 rooms (ours with a plunge pool on our balcony) for adults only, fronting a green golf course only minutes (five!) from the airport. Better yet, it’s all-inclusive, so you’re never left fumbling for your wallet or signing chits that mar the mood. No dreadful buffet lines, either: Every meal at its casual-chic restaurant, Emiliano’s, is a la carte—best enjoyed on the poolside patio.

One night, a mariachi band sprang out to entertain us; another evening a chanteuse crooned at the (also outdoor) bar where Benny, the ’tender, taught us how to mix a perfect margarita and led tequila tastings.

The spa’s massage team melted away any travel kinks, and the pool, patrolled by the resident peacock and iguanas—did the rest. Its attendant’s frequent offers of margaritas didn’t hurt either.

When you decide to exchange the pool for the ocean, simply hop in the resort’s shuttle for a five-minute drive to its private Ocean Club. There, just beyond another pool, the surf slurps the sand and pelicans swoop above the foam as you dive in, or simply stroll the endless expanse of toasty sand. The Ocean Club also boasts its own café for lunch and dinner and excels in seafood (crab timbale, anyone? Fish tacos? Tuna tartare?) Or head, some evening, to the Casa’s sister property to kick back in its Asian restaurant.

Nearly half of the Casa’s guests are repeaters; one lady, completing her 20th visit, was busy making a rez for number 21. Want to start your own tradition? Contact www.hotelcasavelas.com.