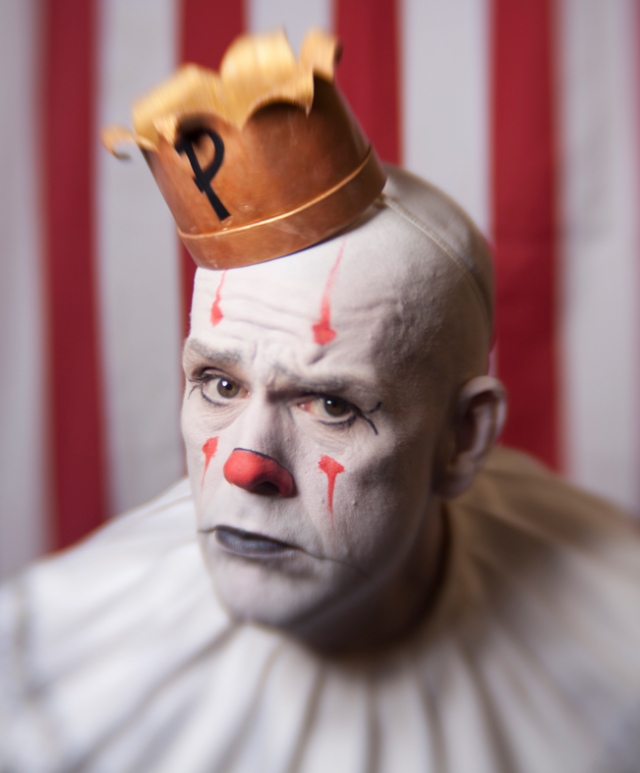 A silent clown with a golden voice. A towering figure of stature and talent. His voice makes me weep, his appearance is a little unsettling. He’s Puddles and he’s bringing Puddles Pity Party to town for a show at Mill City Nights on Thursday, October 2. I can’t wait.

Perhaps you’ve seen him; his version of Lorde’s “Royals” with Postmodern Jukebox went viral (see video below), with good reason. He walks into a crowded frame with purpose, everyone is deadpan, and they deliver a version of the song that is so satisfying as more of a Gen X anthem than what the young Lorde likely intended. Because, let’s face it, many of us Gen Xers sadly feel that struggle between the grown-up world of Cristal out there, in sharp competition with our waiting-for-the-other-shoe-to-drop reality. Or maybe it’s just a fantastic song sung by a stupendous voice, without all the postmodern deconstruction. However you like it.

An internet search shows that Puddles covers other songs that delight our playlists: ABBA’s “Dancing Queen,” Celine Dion’s “My Heart Will Go On” from Titanic, and Sia’s “Chandelier.” I antsy to see and hear what he brings to the stage on Thursday which, as he said below, will be included on a CD he’s going to record next week. Very exciting.

And, true to form, being a silent clown meant that Puddles didn’t take a phone interview, but tacitly returned my questions via email. A clown of few words, he says so much:

Where’s the Pity Party and how does one get an invitation?
The Pity Party is on the road right now, spreading the pity from city to city. And you’re all invited.

Why so sad?
It’s a sad and beautiful world. Sometimes I cry tears of joy and not sadness. It’s important to let it out.

Where does a clown with a golden voice go for training?
School of Hard Knocks.

Are you afraid of other clowns?
No. Of course not.

Is there a story behind the name “Puddles”?
That’s a question for my Pop. He’s up in Valhalla if you want to give him a holla.

Did you have to come out to your family as a clown?
My family came out to me as a family.  And that meant a lot to me.

Why do you carry a lantern?
To light the way.

Are you bringing anyone with you to Minneapolis? MonkeyZuma? Sweet Georgie?
MonkeyZuma is at home mowing the lawn and taking care of Sweet Georgie and Kitty Klaus.

Do you do any songwriting?
I do like to dabble in some songwriting on occasion.  But I also love to sing the beautiful cathartic words of others.

Can we expect an album from Puddles PIty Party? If so, what might it include?
I’m in the studio next week working on a CD.  It will mostly represent the material in the current show.

Which celebrity would you spend 27 hours in a box with and why?
That’s easy. The Cos.

Who flirts with you more, men or women?
I feel the love from both parties.  Women seem surprisingly more forward.

What are you looking forward to doing in Minneapolis?
It will most definitely involve food and coffee.

Why are you silent?
‘I’m silent for the sick and lonely old,
for the reckless ones, whose bad trip left them cold.
I’m silent mournin’ for the lives that could have been.
Each week we lose a hundred fine young men.’

What should we expect from your show, for those of us who’ve never seen you perform?
Half the laughter. Twice the tears. And lots of hugs.

“Royals” with Postmodern Jukebox via ScottBradleeLovesYa