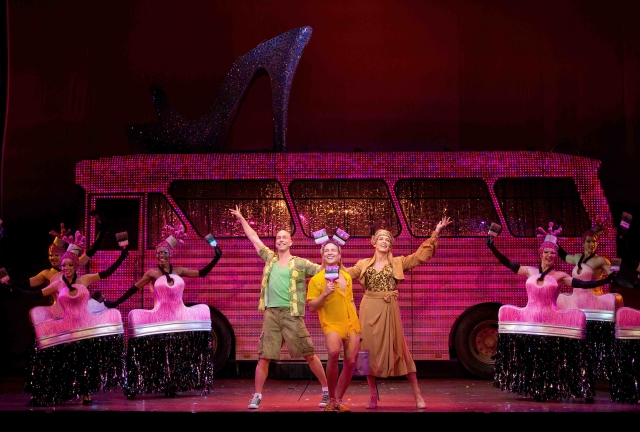 Broadway has turned making popular films into pop musicals and it has been a practice that has rightly come under criticism for quite a while. But in the case of Priscilla, Queen of the Desert, the musical, that process has been wildly successful. The story line is basically the same as the Stephan Elliot’s groundbreaking 1994 film, but for stage, playwrights Elliot and Allan Scott and director Simon Philips, conjure much more love from beneath the surface. And you can palpably feel that love at the Orpheum Theatre.

‘Priscilla’ refers to the bus that travels thousands of kilometers from Sydney to Alice Springs in the heart of Australia’s outback. On board are two drag queens and a transsexual whose journeys are both geographical and emotional. This queer odyssey compels them to face their inner selves. For Adam/Felicia, it’s his reckless self-indulgence. For Tick/Mitzi (Wade McCollum), it’s his responsibility and identity as a father, and for Bernadette (Scott Willis), who made her mark decades before in the fabled Les Girls dance ensemble, it’s her own cynicism.

However, unlike the film, the stage version’s Adam and Bernadette are far more likable. Where the superb Guy Pearce and Terence Stamp laid on their characters’ acid bitterness almost to borderline extreme, West and Willis strike the perfect balance between acidity and the lighter touch. The result is are two compassionate, compelling, and endearingly human portrayals. And perhaps it suits our own era of much improved acceptance of queer people. Perhaps bitchy bitterness doesn’t play so well nowadays.

McCollum is sweetly vulnerable throughout as a drag queen who is a bundle of nerves over the prospect that his young son who will see him at journey’s end might reject him. Willis and Joe Hart as macho mechanic Bob, create a beautiful relationship on stage between two middle-aged misfits who finally find their soul mate. 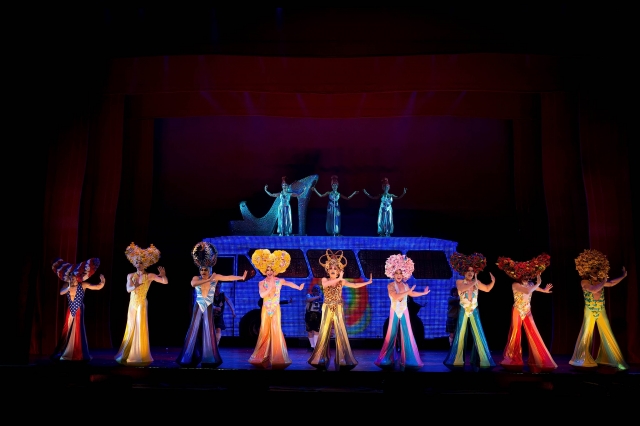 Priscilla Queen of the Desert Company. Photo by Joan Marcus.

The premiere of the national tour at Minneapolis’s Orpheum is drenched in vibrant costumes rippling with madcap flair by designers Tim Chappel and Lizzy Gardiner. Whether it’s glittery speedos, sexy reptile suits, or any number of gloriously outlandish drag outfits, the effect is bedazzling. The vibrancy also applies to Brian Thomson’s set and bus design, Cassie Hanlon’s make-up, Brent Fredrick’s music direction, and Nick Schlieper and Jonathan Spencer’s lighting. What an injection of cosmic light energy for a cold January night!

The Abba fare of the movie has been traded in for a tuneful treasure chest comprised mostly of disco hits supervised and arranged splendidly by Stephen ‘Spud’ Murphy. Frankly, it suits the drag realm better than the wholesome Abba and opens the portal to some of the sexiest and wittiest stage dance you may ever see. This show pulls out all the stops with lots of male skin and drag flamboyance matched with seamless Dionysian dance technique choreographed by the extraordinary Ross Coleman. Wait till you see those studs on a leash! That’s all I’m gonna say…. Priscilla unexpectedly delivers one of the most joyous theatrical experiences in years. 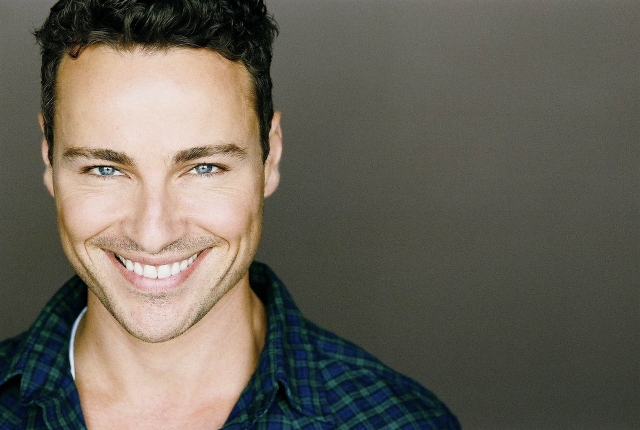 I caught up with the devilishly handsome Bryan West, who plays the devilishly hilarious Adam/Felicia in the glorious Priscilla, Queen of the Desert. The Broadway smash has launched its national tour at the Orpheum.

JT: What did you do to get into the character?

BW: I lost 15 pounds. I really cut back on the bad foods and went to the gym almost every day leading up to our opening. My character wears a lot of skimpy clothes, so I wanted to feel confident up there. I also made sure to hang out and establish a rapport with my co-stars Scott Willis and Wade McCollum. It helps in making our onstage relationships believable. They are also just really cool guys.

JT: What are a few of the differences between the classic film and the current stage production?

BW: In the movie, Adam is obsessed with Abba, but in the musical, he worships Madonna. The movie, although it has many funny moments, has a dark side to it. Our show has serious moments, but we definitely focus on the celebration part of the story. Lastly, the movie’s performances were mainly centered on the three main characters. While we still do perform many songs, we are lucky enough to have a large cast of talented people to surround us with crazy things like human cupcakes and flying divas.