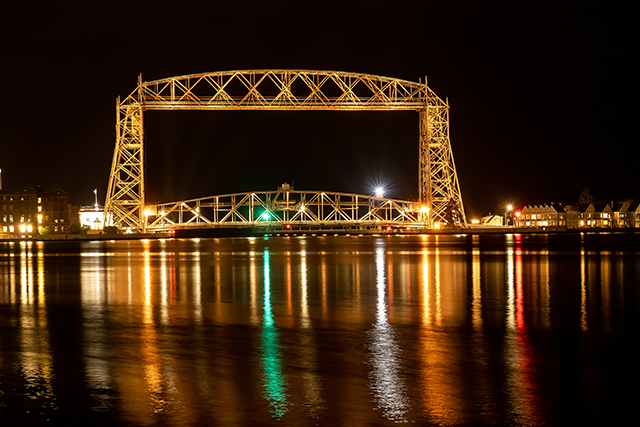 The Twin Ports Tell Exclusion To Go Jump in the Lake

The unfeeling mountains of jagged ice gouged the soft, sedimentary rock beneath them, graciously digging their own collective grave before dying the slowest of deaths. How slow? It took 10,000 years, give or take a millennium, before those sky-jabbing frost giants melted into the world’s biggest puddle. The grandest changes complete, 100 centuries later (give or take an epoch), Lake Superior remains a place defined by the lack of definition, by constant change.

According to its mission, Duluth Superior Pride is dedicated “to serve the people of the Duluth Superior area community’s diverse sexual and gender identities by organizing safe and inclusive events that celebrate equality and self-expression.” This mission has manifested annually for over 30 years as the region’s annual Pride Festival. But, like the eastern glaciers of antiquity, it has—in recent years, anyway—had to change shape to accommodate the conditions around it.

“2019 was our most successful year,” asserts Duluth Superior Pride co-chair Blake Sawle. “We broke the attendance record, and we had a record number of vendors and sponsors.” In fact, a full spectrum of events were on display, including block parties, dance parties, party parties, a 5k race, and even historical exhibits, all attended by thousands of people. The Pride committee was poised to make 2020 even more successful until…

“The pandemic happened,” Sawle laments. The show did go on that year, but only virtually. The 2020 Pride (e-)Festival included an art contest, a silent auction, online concerts, and messages of support from community leaders. Ultimately, though, despite the heroic efforts of the Pride committee and the unflagging support of the surrounding community, Pride 2020 represented a compromise that, like all the best compromises, frustrated everyone involved.

That might set the stage for a dramatic, victorious comeback this year, but Sawle encourages prudence over ebullience, as the coronavirus pandemic has yet to fully run its course. “I get it,” Sawle says. “People want to get back to a normal Pride festival, but behind them are other people who are worried [about COVID-19 exposure].”

Sawle appreciates the virus-centric leeriness of some prospective Pride-goers. “I tell those people that we’re taking all the precautions that we can,” Sawle assures, “but if you still don’t feel safe, it’s okay not to show up. We want to go big, but we’re going to be cautious. There’s a lot going on in Duluth that weekend, and we don’t want to contribute to a possible larger problem.”

Still—waning pandemic or no—the show must go on.

Duluth Superior Pride 2021 will begin on Thursday, September 2nd, at 5:00 PM, with the Mayor’s Reception to be held at the Duluth Depot. The event has traditionally included food, cocktails, live music and a presentation honoring outstanding contributors to the local queer community. The Pride Festival proper will begin 11:00 AM on Saturday, September 4th, at Bayfront Festival Park. This includes the usual technicolor dream fare of family-friendly live music, entertainment and games. Less energetic Pride-goers can visit beer tents, exhibitors, and vendors of every stripe. The festival will de-fest at 7:00 PM.

One Hallmark of this Pride is rare among such celebrations—an inclusive worship service. “Every year, it’s held in a different place, a church or a temple,” reports Sawle. “[Local religious leaders] reached out to us. They told us, ‘We stand with you, we want to provide a safe place to worship.’” It’s an event that makes Duluth Superior Pride as distinctive as it is inclusive.

And just as locals sometimes reach out to Duluth Superior Pride, Pride reaches out to the locals, as evidenced by the acronym frequently cited on Duluth Superior Pride’s official communications: “GLBTAQI2S.” While the first seven characters are likely familiar, the last two might not be: they represent the inclusion of Two-Spirits, esteemed indigenous folk who are thought to have been born with both a male and female soul, often serving the role of tribal unifier. “Different areas have different things,” notes Sawle. “This is one of the things we have.”

Of course, no Pride festival would be complete without a parade, and the Twin Ports’ is no exception. While the precise location has yet to be determined, it will happen on Sunday, September 5th, at 12:00 PM, somewhere in Superior—the city, not the lake, which narrows things down considerably.

Happily, that score of stalwarts—which includes co-chair Sawle, naturally—has managed to persevere with Pride (and with pride). Even as its substance has changed, like that of a giant, ancient glacier-turned-lake, the Pride committee ensures that the Pride Festival of 2021 will not just be good, it’ll be Superior.