Portland, Where the Livin’ Is Easy 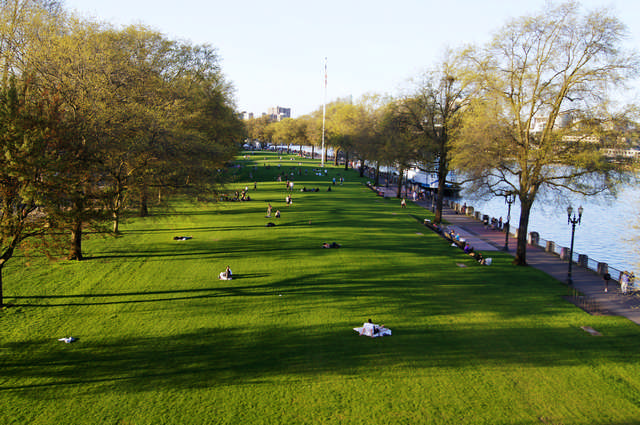 The Tom McCall Waterfront Park is a popular destination for jogging, biking, and checking out local art. Photo courtesy of Travel Portland

Welcome to Portland. You’ve heard the hype? How its pastoral life is paraded by its smart, eco-conscious, bearded, tattooed, forward-thinking, public-minded, mellowed-out citizenry? Well, it’s all true. A lot like Minneapolis, but with more pines, better urban planning, and the world’s best bookstore. The only myth I’m here to ruin is that it rains all the time. Most locals don’t carry an umbrella, because, as locals schooled me, “It’s never a downpour, just a gentle mist.” Four days here and I didn’t feel a drop.

It’s a city of unique neighborhoods to wander, divided into five quadrants (math is not their strong suit) along the Willamette River—easy to maneuver, thanks to light rail and Uber. First thing, I headed to the Alberta Arts District to patrol its indie shops, cafes, and galleries, aside the dog-walkers and stroller-pushers of the newly hip ’hood. Breakfast at Pine State Biscuits sets the mood, standing in line (there’s always a line) to order “anything with mushroom gravy,” declared a nose-ringed, Bunyan-shirted resident. I complied, adding it upon the stack of fried chicken, bacon, and cheese topping my mega-bun. 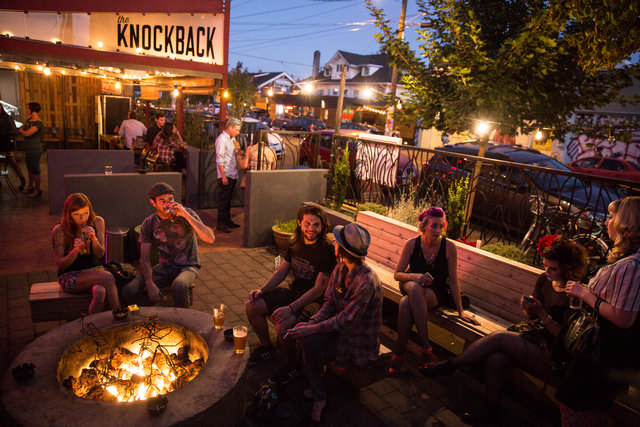 The Knockback is one of many upscale drinking spots in Portland. Photo courtesy of Jamies Francis and Travel Portland

Then, just when you think you’ll never be hungry again, there’s Bollywood Theater, as blissfully over-embellished as anything in Mumbai, with food to match. Or consider Random Order Pie Bar (cocktails, too) and Salt & Straw, with hand-crafted ice cream in flavors that bounce from pear/blue cheese to bone marrow & Bourbon-smoked cherries to slurp as you stroll from guitar store to sake bar; bike shop to artists’ collective; fabric boutique to Collages, a boutique of locally produced wish-lists. There’s Tumbleweed for tailored femme wear, Ampersand with fine books and gallery, Shoe Shangri-La, and more. 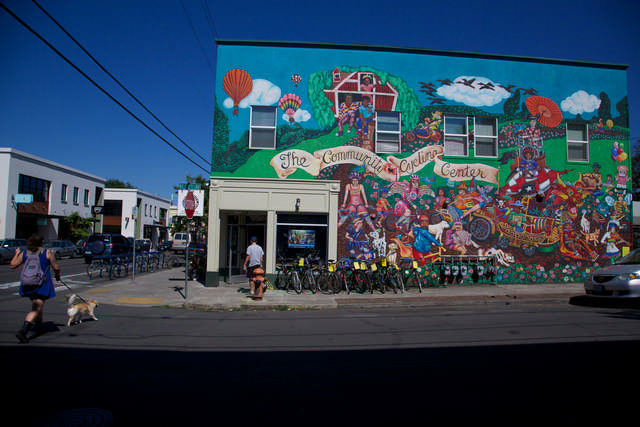 A quick Uber away lies Mississippi Avenue, a newer gentrification of a ‘hood of modest houses now vying with stylin’ lofts and condos. Stop at Sweedeedee for brunch in this once-bungalow. My choice: chilaquiles with house-made tortillas. Don’t miss the kitchen’s pies and muffins while listening to tunes from its cache of LPs. (Around the corner you’ll find Mississippi Records.) Then patrol the avenue to Tanner Goods, featuring up-market accessories; Paxton Gate, with eclectic treasures ranging from animal skulls to framed insects and carnivorous plants; and The Meadow, whose gourmet goods include finishing salts and chocolates. Stop in the friendly Q Center (LGBTQ community center) while you’re here. 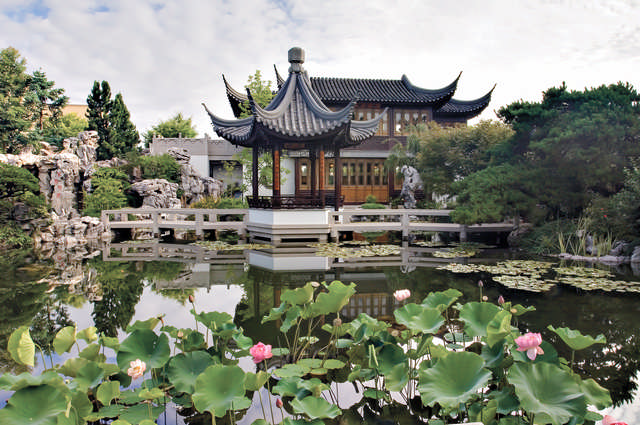 Adjoining downtown lies the longer-established Pearl District, which has traded its once-homespun edges for shinier storefronts, including familiar chains among the indies and galleries. Here’s where to find Powell’s, the three-floor book arena, complete with maps to its 900 aisles. The intimate Oregon Jewish Museum details not only the state’s early arrivals but also those fleeing Nazi and Soviet rule. A temporary exhibition called Vedem features the amazing, so-named magazine stealthily put out by teenagers in the Terezin concentration camp. Bonus: Every district sports an ebullient pod of food carts (600 citywide!). And NO sales tax! 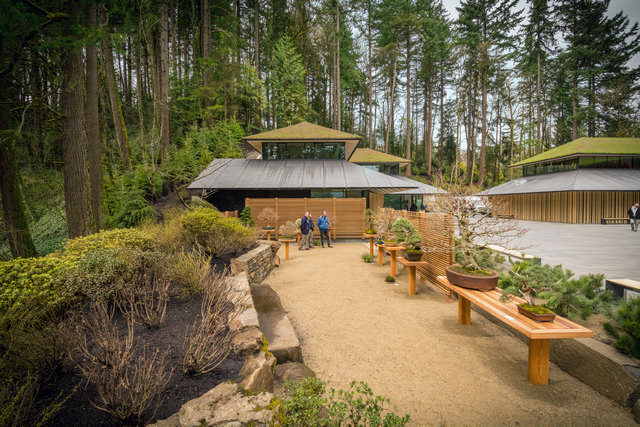 To get a handle on the lively downtown and its design, sign on for a walking tour via the Visitors Center in Pioneer Square, the city’s living room. We learned that Portland’s user-friendly vibe is no accident. During the late ’70s, residents decided that a good lifestyle began with well-planned urban design, incorporating green values and intelligent transportation systems. Thus, buildings’ upper stories are set back from street-level to capture sunlight; street facades must include windows; building heights are limited, as is protruding signage, etc. 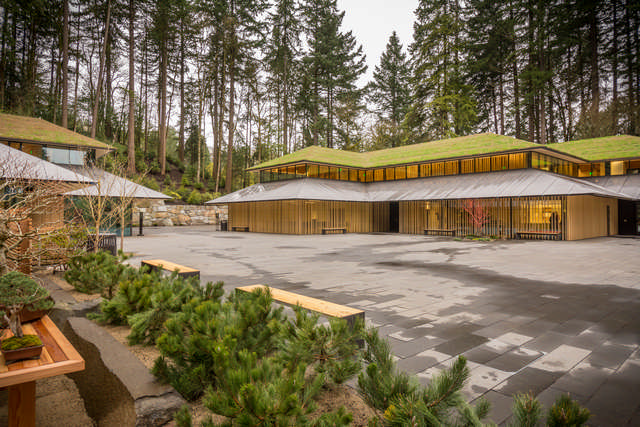 Portland is home to a 9.1-acre Japanese Garden. Photo by Bruce Forster

Four-spout bubblers (OK, drinking fountains) stand on many a street corner, thanks to an early benefactor determined to provide free, clean drinking water to one and all. Oh, and there’s Portlandia herself, a muscular statue fronting the facade of a Michael Graves-designed municipal building (love it or hate it: I’m in the loving camp). A riverside swath called Waterside Park has replaced a tangle of freeways, and from it on a sunny day you’ll spy snow-covered Mt. Hood. 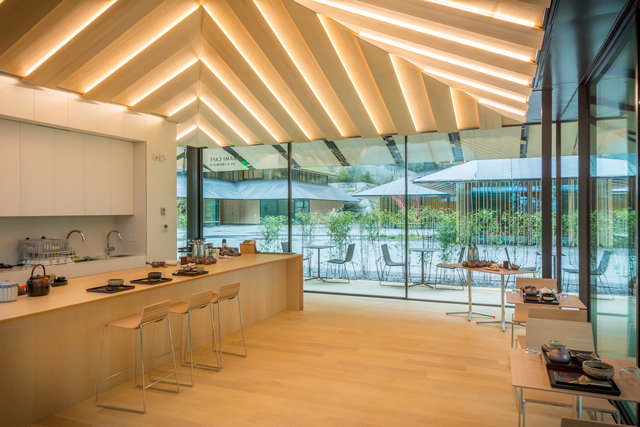 Visitors at the Japanese Garden can relax with some tea at the Umami Cafe.
Photo by Bruce Forster

Follow the park north to the Japanese Historical Plaza, where a series of boulders are carved with sad haiku phrases from citizens of Japanese heritage during their WWII interment, plus an apology by President Reagan. (Today the city sports a wondrous, newly expanded Japanese Garden, too.) The waterfront hosts the must-do, open-air Saturday Market (now Sundays, too), with multitudes of stalls of clothing, trinkets, artwork, prepared food, and primo people-watching.

Head north a few blocks, into Chinatown and its walled Lan Su Garden, a city block converted from a parking lot into an oasis of serenity boasting cherry blossoms, pines, a pool with goldfish big enough to ride on, stone-sculpted footpaths and graceful bridges, along with a tearoom, replica of an artist’s studio, and fine gift shop.

A parkland median, abloom with daffodils, fronts the city’s art museum, performance hall, and Oregon Historical Society (native artifacts to Lewis and Clark and the missionaries who followed, to the story of civil rights, including the state’s Black Panthers). 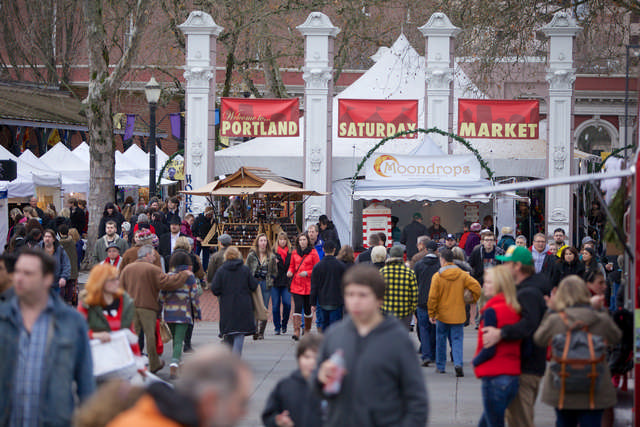 Time to eat. Or, wait a minute: time to drink. Join a Brewvana bus or walking tour to sip the drink that Portlanders most favor—yup, beer. The city boasts 80 breweries, and a tour visits a revolving list of four, each offering samples along with intriguing history. We especially savored Broadside’s lager with cucumber and lime; Ex Novo’s hazy IPA (plus pizza); Unicorn’s hibiscus pils, made from corn; and Cider Riot’s, well, everything. “If you didn’t like cider before,” instructs tour leader Kelene, “you will now.” No lie. And guess where its owner first practiced his cider-making skills? In his dorm room at Macalester College.

Okay, now it’s time to eat, and a grand place to start, I discovered, was right in my high-style hotel, the new Hi-Lo. Its modern Mex restaurant is called (get it?) Alto Bajo, and it delivers on its promise. I feasted on empanadas plumped with locally foraged mushrooms, then pollo carbon, accompanied by a trio of house-made moles: tamarindo, amarillo, and rojo, all stylishly executed—as was my Alto margarita, fueled with anejo tequila.

Dinner at Departures, high atop the Nines Hotel, provides a spectacular city view to match the stellar food that comes from the Asian-influenced kitchen that incorporated Northwest ingredients. My feast of small plates segued from crispy pork belly with cherry ginger to a sumptuous salad of roasted carrot—ribbons, coins—in smoked cashew butter, curry, and coconut cream. Then on to a mountain of Brussels sprouts in lime, mint, and chili, followed by charcoal-grilled scallops with chick peas, carrot, and squash. Room for dessert? Dumb question. Bring on the chocolate-ash cake (from coconut husks) with bits of cherry and durian and chocolate ice cream.

Another night, another hotel with a superior kitchen, that of the Heathman’s Headwaters, whose James Beard-winning chef prepares Oregon rockfish and chips, seafood paella, all manner of shellfish, and my messy-but-worth-it choice, Oregon Dungeness crab in curry sauce. And for dessert, brown butter ice cream with duck-fat caramel. More crab for lunch at Southpark Seafood with a Dungeness roll and side of beet salad.

And for my final dinner, it’s Tasty n Alder, a convivial, buzzy atmosphere in which to savor small plates, such as my grilled quail and side of farro risotto (wild mushrooms, poached egg, Parmesan). When I eyed a neighboring table’s steak tartare and grilled octopus, they kindly shared bites with me. Yum. Couldn’t manage dessert after that, but on a saner day, I’d choose the chocolate malt, served with fries along with the suggestion, “Dip ’em.”

Portlanders take their food seriously, right down to the donut wars between Voodoo, with its iconic pink boxes, and Blue Star, where I overindulged in a blueberry bourbon basil plus a chocolate buttermilk treat with rosewater and gold leaf. As one wise local advised, “It’s Voodoo for shock value (and vivid Instagrams) and Blue Star for gourmet quality.” Take your pick.

The motto is “Pride, not Prejudice.”

June’s Pride features a parade and festivities in Waterfront Park

Red Dress (yes, you, too) is a big-event charity bash in April