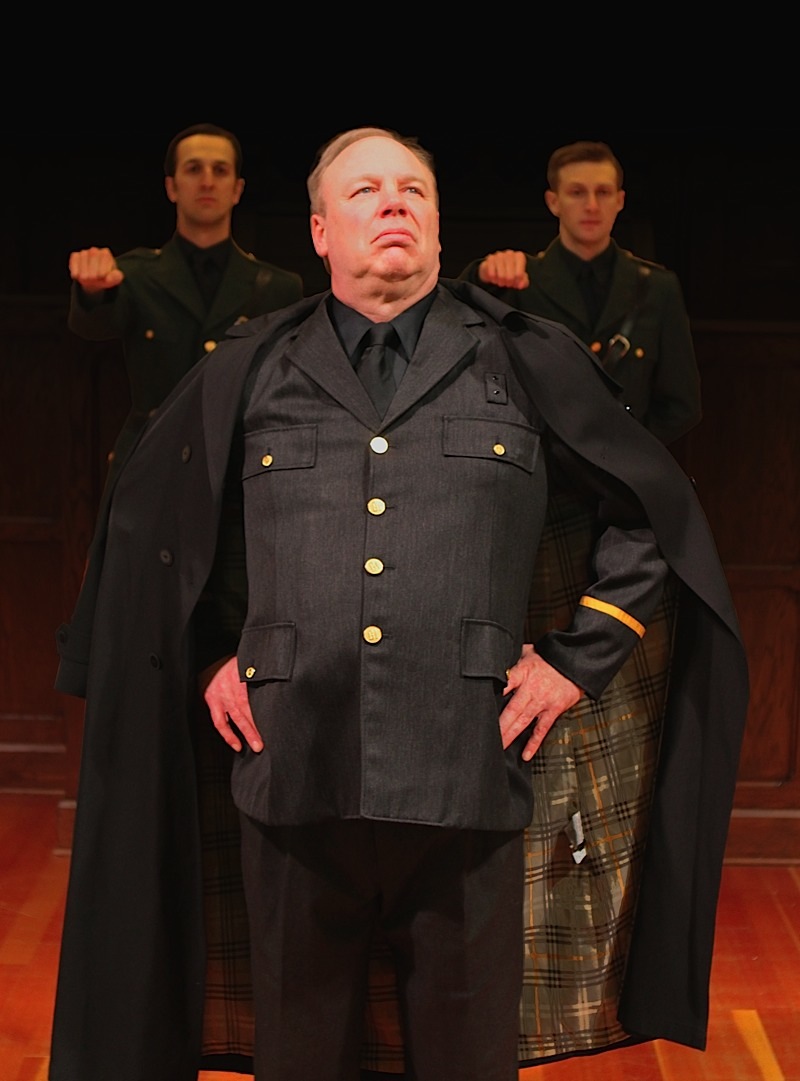 William Shakespeare is synonymous with politics. In April, two fine productions with politics have made strong impressions. Classical Actors Ensemble is presenting a moving production of Julius Caesar at the Minneapolis Theatre Garage and New Epic Theater presented a hypnotic Coriolanus at the Lab earlier this month. Both plays are set in two different periods of ancient Rome and they differ greatly in their dynamics.

What makes CAE’s Julius Caesar a standout among most productions of the tragedy is that it delivers a punch right up until the end. Since the play portrays perhaps the most infamous assassination in history, and soon after that point a bit over halfway through, Mark Antony’s famous speech, “Friends, Romans, Countrymen….” all that remains often feels anticlimactic. However, that’s not the case with this excellent production directed by Randall J. Funk.

JC’s protagonist is not the title character but Marcus Brutus, who struggles in his heart and mind about whether or not murdering Caesar along with co-conspirators, is the right thing to do or not. Neal Beckman, one of the finest classical actors in the region, rightly renders Brutus’ struggle with engaging clarity. But it is after Mark Antony’s speech that Beckman penetrates the guilty conscience of his character to a visceral level. The shame and fearfulness for his soul penetrates to a dark place deep within. He cannot deal with his actions and their repercussions. We finally get to see a Julius Caesar staging that makes for a compelling experience from start to finish, which I sense is how this tragedy was meant to be played in the first place. 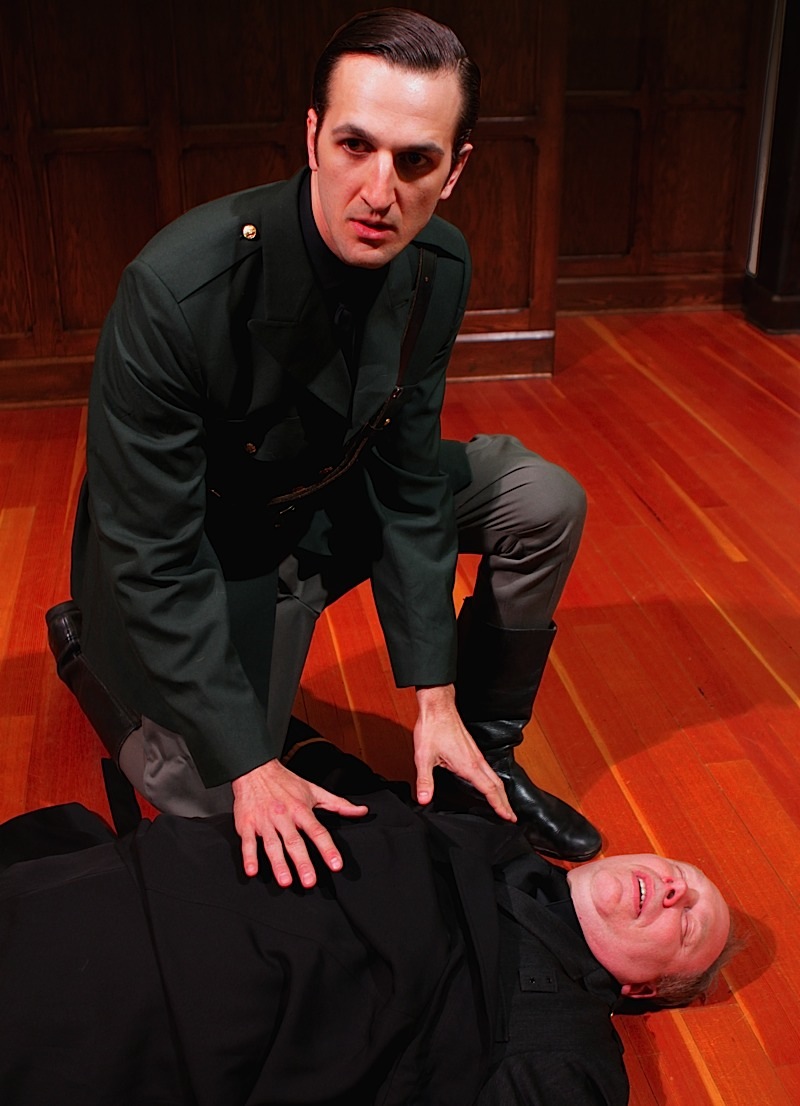 The cast is uniformly strong. Daniel Ian Joeck is charismatic and powerful as Mark Antony. Like Beckman, he is a superb classical actor and was born for this role. Arthur Moss brings confident appeal and a robust dynamism to the middle-aged title role. I mention that because it is reminiscent of how major male presidential candidates in our own nation almost always have this although they are no longer young. And this is a quality that makes or breaks men at or past midlife, especially those who are still ambitious.

Two solid cross-gender performances are given by Samantha Veldhouse Papke as Casca the conspirator and Morgan Le Claire, servant to Brutus. Both women have explored the concept of manly dishonor and manly honor in their process. Dietrich Poppen’s lighting is evocative with striking expressionistic touches. Marco T. Magno’s striking 1930s costume scheme works well but Casca’s traditionally feminine garb was not uniform with the other male conspirators.

New Epic Theater staged a raw and sensual production of Shakespeare’s Coriolanus, a tragedy that has seen more revivals in recent years perhaps because war has become much more a part of daily life and economics. Or maybe it has just become more apparent. Director Joseph Stodola vividly realized the play’s dynamic of how social classes fatally misread one another. Set in early Rome, about three centuries before the advanced age of Julius and Augustus Caesar,  Caius Marcius Coriolanus was clearly a rougher-hewn military leader who had contempt for the peasantry and, like his mother, Volumnia, glorified war and warrior ideals as penultimate to the exclusion of all else. All else was beneath his contempt. And she, as portrayed by Shakespeare, was not much better, though we see that her wiser instincts finally emerge.

The general human and collective impulse is to feel compassion for those in dire need. In Coriolanus the poor are being clearly denied food when the storage containers controlled by the state have a surplus. Obviously an indefensible policy. However, Coriolanus, in strident arrogance and callousness, refuses to help even though he is the leader! So what’s not to get! Some will compare him to certain conservative and law and order politicians of our own time and place, and though that may be fair enough, that’s not the whole problem.

What happens when the opposition is comprised of leaders exploiting anger, violent tendencies, and an incapacity to educate itself on how the machinations of the ruling class work? That may well seem too much to expect, especially among a widely illiterate Roman class, but we actually see this sort of thing constantly nowadays within some, though certainly not all, literate identity and splinter groups, on both the Left and Right. 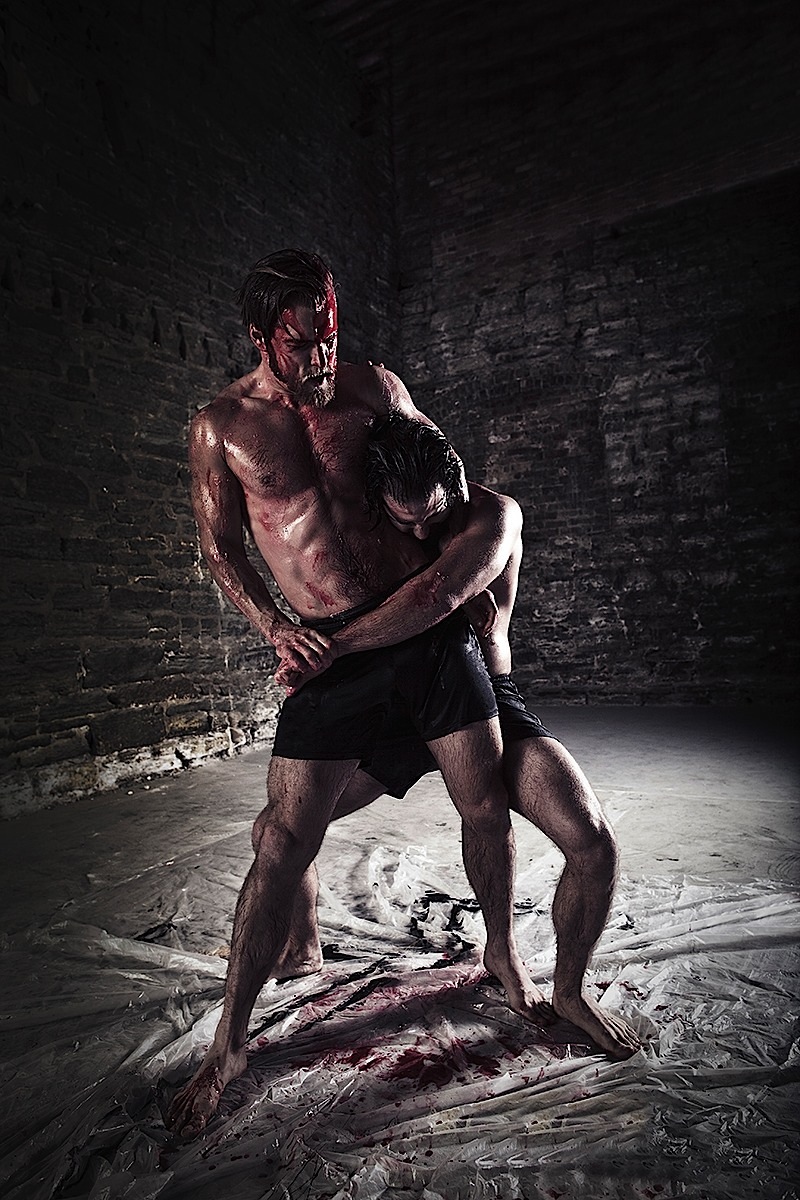 In New Epic’s staging Adam Qualls and Grant Sorenson played the tribunes of the poor with a perfect blend of petulance and envy, and a will to violent disruption as opposed to constructive problem solving. Stodola didn’t give way to the standard image of poor people being implicitly pitiable. A politically incorrect choice but one which tapped into a terrible truth the political left often pooh-poohs: oppressed people who are understandably uninformed and misinformed, through no fault of their own, will inevitably pay the price of opportunistic leaders who don’t want them to understand the nature of the power structure in their given society. Leaders of left and right wing groups are equally capable of patronizing their “flocks.” Politics turns cult-like or like a sports team with overly fervent fans.

To be clear, Coriolanus’s elitism and its consequential cruelty is not approved of by Shakespeare or Stodola. It is simply exposed as part of a larger dynamic that you won’t see expressed on CNN, MSNBC, or Fox, which all seem to have installed a binary, us versus them, view of socio-politics in the mass American psyche.

Torsten Johnson, like Joeck in Julius Caesar, is one of those actors who automatically exudes an Apollonian emanation matched with an inherently rich understanding of classical text. Having followed both actors’ work in recent years I can say this is what some might call a god or goddess-given gift. Johnson portrayed the paradox of a crudely insensitive leader who also partly manifests the grace of a sophisticated man. So as not to offend either political side I am reminded of both Erik D. Prince and John Stennis.

Moreover, Michael Wieser as Coriolanus’ military rival Aufidius, who hails from a tribal kingdom that is cruder than that of Coriolanus, gave a miraculous performance as a man who is a blend of elegance and raw warrior power. James Kunz’s brilliant stage movement indeed helped to facilitate this: a beguiling mix of Greco-Roman wrestling style and modernism that dared to show the uncanny similarities between male-on-male violence and homo-eroticism, surely one of the most taboo things to talk about in our violent era. This likely amazed and unsettled people who watched it, especially given the visceral masculine power of both Johnson and Wieser as choreographed by Kunz. Lucid Thomas’s spectral lighting evoked the dimness of the time, both in thought and in location. Movies have made us forget that ancient times were never lit by electricity. This production gave us a sense of how it actually was.

Antonio Duke and JuCoby Johnson gave strong performances as compatriots of Coriolanus. Michelle O’Neill was a vibrant Volumnia. Zach Curtis gave a poignant rendition of the diplomatic Roman Senator Menenius, a sad figure who does his best to navigate a reconciliation between the various political extremes, but to no avail. Shakespeare has written that role’s arc as a sort of tragedy in itself as Menenius tries his best to solve an impossible situation.